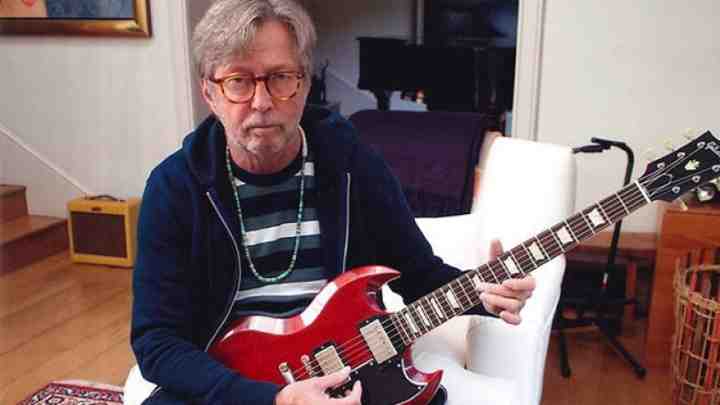 CLAPTON VAXX — (Via Rolling Stone) Eric Clapton detailed his “disastrous” health experience after receiving the Covid-19 vaccine and blamed “the propaganda” for overstating the safety of the vaccine in a letter the guitarist shared with an architect/anti-lockdown activist.

Clapton previously shared his thoughts on the Covid-19 shutdown when he appeared on Van Morrison’s anti-lockdown song “Stand and Deliver” in December 2020; two months later, in February, Clapton received his first of two AstraZeneca vaccinations, he wrote in his letter to Robin Monotti, who shared the letter on his Telegram with the guitarist’s permission. (Rolling Stone has confirmed the authenticity of the letter. A rep for Clapton did not immediately respond to a request for comment.)

“I took the first jab of AZ and straight away had severe reactions which lasted ten days. I recovered eventually and was told it would be twelve weeks before the second one…,” Clapton wrote.

“About six weeks later I was offered and took the second AZ shot, but with a little more knowledge of the dangers. Needless to say the reactions were disastrous, my hands and feet were either frozen, numb or burning, and pretty much useless for two weeks, I feared I would never play again, (I suffer with peripheral neuropathy and should never have gone near the needle.) But the propaganda said the vaccine was safe for everyone…”

In the letter, Clapton also discussed discovering “heroes” like anti-lockdown U.K. politician Desmond Swayne as well as similarly-minded (and some would argue conspiratorial) YouTube channels.

“I continue to tread the path of passive rebellion and try to tow the line in order to be able to actively love my family, but it’s hard to bite my tongue with what I now know,” Clapton wrote.

“Then I was directed to Van [Morrison]; that’s when I found my voice, and even though I was singing his words, they echoed in my heart,” Clapton wrote. “I recorded ‘Stand and Deliver’ in 2020, and was immediately regaled with contempt and scorn.”

As the New York Times noted, short-term side effects such as “fatigue, headache, muscle aches and fever” are common after the second shot, but that those primarily went away after a day or two. (Dr. Paul Offit, a member of the Food and Drug Administration’s vaccine advisory panel, said that vaccine trials was 95 percent effective, irrespective of if someone experienced side effects or not.) For the AstraZeneca shot that Clapton took, fatigue, chills, headache, and joint pain are “very common,” according to the MHRA, the UK governmental body overseeing the vaccine.

The AstraZeneca vaccine was approved last December. “No stone is left unturned when it comes to our assessments,” MHRA Chief Executive Dr June Raine said in a statement in December. “This approval means more people can be protected against this virus and will help save lives. This is another significant milestone in the fight against this virus. We will continue to support and work across the healthcare system to ensure that COVID-19 vaccines are rolled out safely across the UK. Protecting health and improving lives is our mission and what we strive for.”

The MHRA noted that in certain trials, there were “very rare reports of events associated with inflammation of the nervous system, which may cause numbness, pins and needles, and/or loss of feeling. However, it is not confirmed whether these events were due to the vaccine.”

Monotti has been deeply critical about the Covid-19 response, recording a podcast entitled ‘Our Generation’s Eternal Fascism is COVID19’s Great Reset, We Must Fight It’ and criticizing the UK government on social media.

Last December, Clapton said in a statement that accompanied “Stand and Deliver,” “There are many of us who support Van and his endeavors to save live music; he is an inspiration. We must stand up and be counted because we need to find a way out of this mess. The alternative is not worth thinking about. Live music might never recover.” (On a similar note, Clapton allegedly lent a van to a British band that continues to perform live music throughout the U.K. as a protest against lockdown measures.)

Clapton also revealed in his letter that he performs on Morrison’s “Where Have All the Rebels Gone?,” a track off Latest Record Project Vol. 1, the Irish singer’s “darkly strange and delightfully terrible” new album, as Rolling Stone called it. (Clapton mistakenly calls the track “The Rebels” in his letter.)

“I’ve been a rebel all my life, against tyranny and arrogant authority, which is what we have now,” Clapton wrote. “But I also crave fellowship, compassion and love… I believe with these things we can prevail.”

Rockers On Broadway’s Donnie Kehr guested on Robert Miller’s Follow Your Dream podcast yesterday … Quite by accident I discovered a great new channel on my Sonos, Pantheon. Mostly classic rock and a little heavy on the Allman Brothers; am loving it … Have you heard enough about that Bengal tiger on the loose in Houston? He’s getting his own talk show! …

One of my favorite new shows on TV, CBS’ Clarice will switch over to their streaming network (Paramount +) next season. Sad, as many who grew to love the program will not get another streaming service …

Paul McCartney’s magnificent album Ram is 50 years old! I still listen to it today and it sounds as good as ever. Check out Roger Friedman’s brilliant re-cap on the album here: https://www.showbiz411.com/2021/05/16/ram-the-paul-mccartney-solo-album-that-meant-the-beatles-were-over-turns-50-this-week … Next time, we’ll have info on the massive Discovery/Warner Media merger that will keep the Zuck (Jeff Zucker) at CNN. Believe me, this was one that rocked the media world Monday …Romeo Delight at The Landis Theater June 12; a encore performance …And, Happy Bday Howard Smiley!

Genevieve Rafter KeddyMay 16, 2022
Read More
Scroll for more
Tap
Own A Piece Of The 80’s!-One Of The Best Live Bands Of The 1980’s Kid Creole & The Coconuts Have Embraced NFT
Dear Evan Hansen Coming to Theatre’s September 24 Ahead Of Broadway Re-Opening