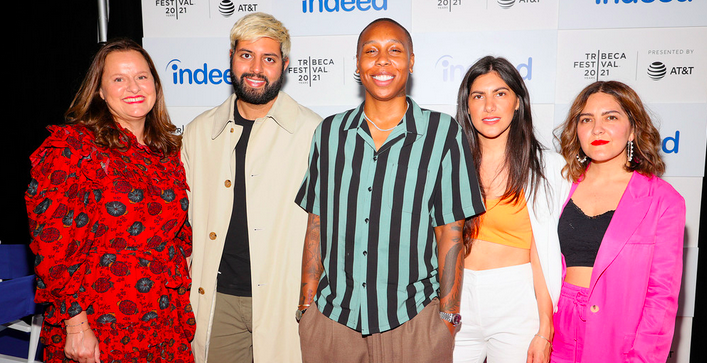 Indeed, the world’s number one job site, partnered with Emmy Award-winning writer, creator, and actor Lena Waithe and her company, Hillman Grad Productions, to create the Rising Voices initiative, which aims to uncover, invest in, and share stories created by Black, Indigenous, and People of Color.

Filmmakers and storytellers around the singular theme of the meaning of work and the idea that jobs can change us all was a main focus. Each of the initiative’s 10 films premiered during today’s special event at Pier 76. Waithe was in attendance, along with Indeed CEO Chris Hyams, Tribeca Festival co-founder and CEO Jane Rosenthal, Hillman Grad Productions President of Film/TV Rishi Rajani, Indeed Group Vice President of Environmental, Social & Governance LaFawn Davis, and all 10 of the emerging filmmakers.

Indeed, Ventureland and PRETTYBIRD filmmakers along with program mentors Calmatic, Paul Hunter and Melina Matsoukas, selected the 10 screenplays from over 850 applications. Each filmmaker was awarded a $10,000 writing fee, received a $100,000 production budget, a dedicated line production crew through Hillman Grad and 271 Films and had access to an additional $25,000 COVID budget to ensure the safety of the cast and crew. At least one winning filmmaker will receive an additional $75,000 to create new work for Indeed as a non-exclusive filmmaker in-residence.