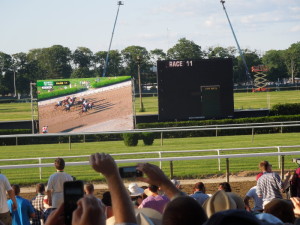 Tonalist won the 146th Belmont Stakes Saturday in a great victory that denied the heavy favorite California Chrome. Stopped short was the dream of becoming the first Triple Crown winner in 36 years.

“I really thought today was going to be a day I was going to tell my grandkids about,” stated Jack Garrett of Queens. “Man, you win some and this was just not it sadly.”

Thousands of New Yorkers and visitors from across the states were in attendance at Belmont Park in Elmont, New York to witness a dramatic finish in which Tonalist and jockey Joel Rosario crossed the finish line first.

“I’m a little bit upset about California Chrome,” Rosario told NBC Sports. “If I was going to get beat, I wanted to just get beat by him.”

California Chrome finished in a dead heat for fourth place with Wicked Strong in his bid to become the first Triple Crown winner since Affirmed in 1978. Only 11 horses have won In 135 years in a series of races for 3-year-old thoroughbreds have all been contested.

The Triple Crown is three races in a five-week period when thoroughbreds normally run no more than monthly, which makes it especially difficult. And, Belmont is a quarter-mile longer than Churchill Downs and five-sixteenths longer than Pimlico Race Course for Preakness. All of these factors have contributed to the daunting task of accomplishing a win.

It was not the fairy tale ending, but it was a day that many New Yorkers are not soon to forget.