17 Border Crossings Flies Above the Walls 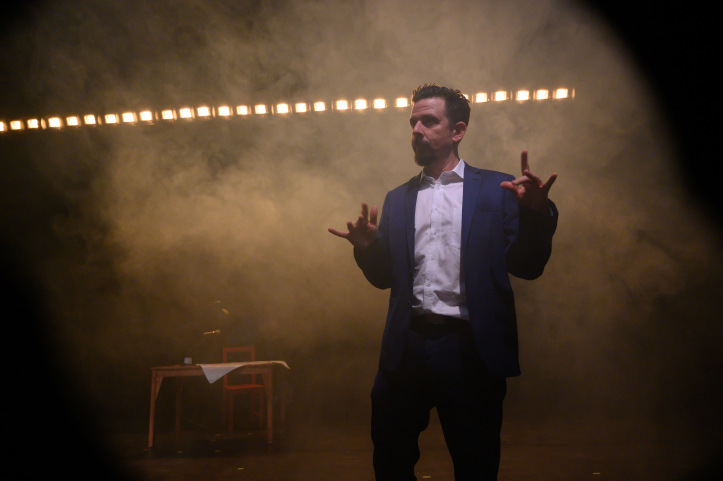 17 Border Crossings Flies Above the Walls

It’s a one man border crossing Times seventeen, giving a lesson in curiosity, acceptance, and adventure. The passenger, as he is so labeled by creator/performer/scenic designer Thaddeus Phillips (Barrow Street’s Capsule 33) takes us on a journey with a suitcase full of loving care, humor, and invention, jettisoning us back to our own memories of numerous similar border crossings and a few not mentioned. We get this empathetic and detailed voyage all from the comfort of our red cushiony seat at the New York Theatre Workshop, where 17 Border Crossings is lifting off right on time into this conflicted time in history.  The play, as directed with thoughtful attention by Tatiana Mallarino (NYTW’s El Conquistador!) has been making the rounds, hopping with determination about the globe with even more border crossings than the seventeen mentioned. It makes complete sense, as this captivatingly creative look into the walls and lines that separate cultures and countries is a much needed lesson in tolerance and loving acceptance. A lesson that should be required by all at this time of heightened fear mongering and immigrant paranoia.

With little help from all those technological advances in theatrical design and projection, 17 Border Crossings sets forth encumbered carrying with it an assortment of people, places, and passports to engage and identify with. The startling strong and focused lighting by David Todaro is smart and low-tech for the most part, utilizing a movable strip of lighting with some adjustable desk laps filling out the form, they, alongside the impressively wise sound design by Robert Kaplowitz (NYTW’s Hadestown) magically find a way to tell a story with such intimacy and strength, that each of the seventeen crossings have a carry-on bag of different textures, qualities, and spirit. The details, courtesy of some fine work by dramaturg Patrick Kealey, have a surprising emotional weight far beyond the allowance, keeping you powerfully engaged and heavily invested.  From the historical lineage of the passport to the dynamic and meaningful ending of Phillips’ journey, his 17 Border Crossings have a spirit that makes you want to pack your bags and fly far and wide across the globe, experiencing all the cultural uniqueness and shared personal experiences that makes travel, and this play, such a rare joy and an airborne enlightenment.