Menemsha Films and HCC are pleased to announce the official North American premiere of 1945, a new epic movie by distinguished Hungarian director Ferenc Török. To support its North American theatrical debut, HCC and Menemsha are bringing author/co-screenwriter Gábor T. Szántó and lead actor Péter Rudolf for special public talks with exclusive Q&A sessions after selected screenings at each venue on the day of the premiere: after the screening at Lincoln Plaza Cinema starting4.40 PM and at the Film Forum starting 7 PM. 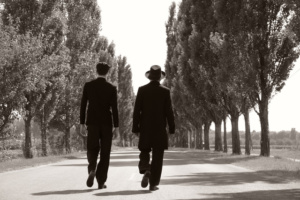 The film paints a complex picture of a society trying to come to terms with the recent horrors they’ve experienced, perpetrated, or just tolerated for personal gain. The movie takes place on a sweltering August day in 1945, when an Orthodox man and his grown son arrive to a village in Hungary while the villagers prepare for the wedding of the town clerk’s son. 1945 is already a huge success amongst film critics, praised by journals like Variety, the Miami Herald, or the Hollywood Reporter and won the San Francisco Film Critics Circle for Best Narrative Feature and the San Francisco Jewish Film Festival Audience Awards for the Best Narrative and Best Documentary Feature.