Oprah Winfrey’s stirring and powerful acceptance of the Cecil B. DeMille Award delivered the peak buzz on social media. She honored the past – like the late civil rights hero Recy Taylor. And made us hopeful for the future – when no one has to say #MeToo.

The Golden Globes addressed sexual harassment and gender inequity. Social media analytics experts at Talkwalker gathered metrics on last night’s ceremony, dominated by messages of solidarity with people who have been victims of sexual abuse. It gave the community an opportunity to champion Time’s Up – Hollywood’s new initiative to get victims of sexual harassment in low-income jobs legal help, and push anti-harassment legislation.

The 2018 Golden Globes were the first, major awards show since the national reckoning over sexual harassment.

Sadly, men are just as much victims and that needs to be addressed. Also income brackets do not prove a barrier between being abused or not. In most times if a person comes from money they are dismissed as having too much.

3.3 million tweets for Golden Globes over Jan 7 and early hours of Jan 8 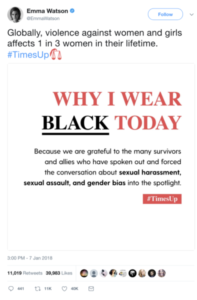 The most used emojis were heart symbols with the standard red heart getting slightly more mentions than the black heart which became a symbol of the #TimesUp movement on the night.

Most influential voices on Twitter around the Times Up movement on the day were: