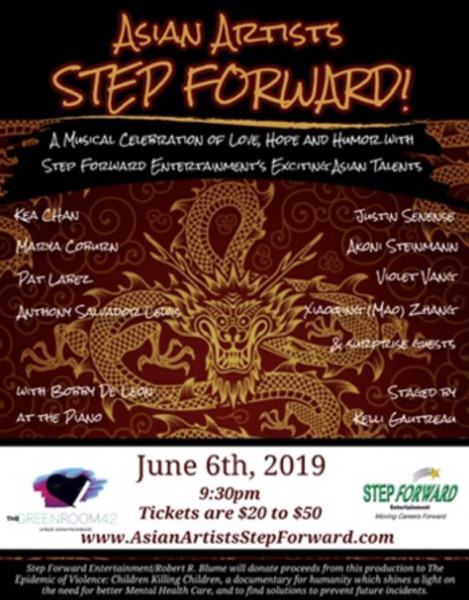 Asian Artists Step Forward, A Musical Concert Celebrating Love, Hope and Humor was performed live on June 6, 2019 at The Green Room 42. To help with the The Actors Fund Covid 19 Relief Effort the show will re-air and stream on T2Conline.com and Broadwayworld.com beginning Tuesday, August 4th  and will be available until October 31st.

The original concert has been slightly edited for streaming and will now feature ‘wrap around host’, radio legend and Broadway “voice of God’ Valerie Smaldone.  As part of her introduction and remarks during and after the concert, Ms. Smaldone will be discussing The Actors Fund and encouraging donations.

Step Forward Entertainment’s Asian Talents will perform songs from Broadway, the American Song Book and 1970’s pop! This unique collection of Asian talents include one of China’s biggest Musical Theatre stars, the former National Anthem singer of the Philippines; cast members who have appeared in the TV shows Billions, Daredevil, Magnum P.I. (the original), Bronx SIU and those who have appeared in such films, such Stay Away Joe (the love interest of Elvis Presley), Dementia 13 (as the murdered priest), and performed in LIVE in Avenue Q, Sweet Charity, etc. and a 15-year old musical prodigy from Wisconsin making her NYC debut.

Robert R. Blume, the producer of both the live concert and streaming video, stated “I am thrilled to be able to stream this concert to bring to light these exciting performances, and at the same time benefit The Actors Fund, the organization which helps all of us in times of need.  I just hope we continue to create pieces of art with meaning. I feel honored and am privileged to represent these artists of Asian heritage.“

To Donate to The Actors Fund Covid 19 Relief Effort – www.actorsfund.org/stepforward

Valerie Smaldone currently has a weekly radio show and podcast on AM970, Bagels & Broadway and is a 5-time Billboard Magazine Award winner and is well known for her unprecedented success holding the #1 on-air position in the New York radio market. She has been the “Voice of God” for numerous prestigious live events including: The Kennedy Center, The Clinton Global Initiative, The Concordia Summit, The New York Emmy Awards, The Tony Preview Concert on CBS, The Drama Desk Awards,  Broadway on Broadway in Times Square, Broadway Under the Stars in Central Park, The GLAAD Media Awards, The Point Foundation, and many more.  On television, Valerie has been seen on numerous episodic television shows including Blue Bloods, Manifest and Tommy.  She has also been a special reporter for ABC and NBC for the Columbus Day Parade.

Broadwayworld.com called Ms. Chan “breathtaking”.  Times Square Chronicles (t2conline.com) heralded Kea as “a performer to keep your eye on”. This native Filipina most recently appeared in The Actors Fund benefit concert celebrating the music of Neil Sedaka.  She also appeared on the Amazon Prime TV series, Homicide City and, at The Green Room 42, she appeared in several concerts.  A finalist for the lead role of Kim in the recent Broadway revival of Miss Saigon, Kea had the honor of singing for the Presidents and Ambassadors of the Philippines, Japan, Singapore and Hong Kong.  Performing since she was 11, Kea won the Philippine Child Performer of the Year at 13.  Kea has performed in Indie Shorts, the Film Festival circuit, Bronx SIU on Amazon Prime, Las Vegas hotels, the Hudson Guild Theater, The Triad and Feinstein’s 54 Below.

Marya Coburn was born to a Filipina mother and an American father of Scottish, German and French extraction. Under her stage name, Marya Christen, she was the first and only Philippine-born actress who worked with legends such as Elvis Presley, Frank Sinatra, Jon Voight, Yul Brynner, Bob Fosse, Robert Wagner, to name a few. She is a singer, actress and dancer whose work includes appearances on mainstream American television shows, movies and Broadway musical productions. Marya retired from performing a number of years ago and is now a philanthropist in private life.  She performed in this concert for fun and to celebrate her birthday with the cast.

Pat Labez was born in the Philippines and raised in Hawaii.  In addition to serving as Associate Producer on this concert, Pat has been a working actress since her debut in the original Magnum, P.I. on CBS in the 1989. Following a successful career in health and human services, she returned to acting and was recently seen in a large co-star role on the hit NBC season finale of New Amsterdam in April.  She and also a co-star on CBS-TV’s Blue Bloods that aired in January this year. Earlier acting credits include co-star roles on CBS-TV shows Island Son with Richard Chamberlain and Jake and the Fatman with William Conrad. She also did a number of local commercials, PSAs, and industrial films between Hawaii, California and Colorado.

Anthony Salvador Lewis, is a singer, actor and performer who was born to a Filipina mother and an Italian father. He spent most of his youth showing off his athletic prowess while attending the Lee Strasberg, Actor’s Institute to enhance his stage presence where he received a scholarship to attend the Singer’s Forum. He has performed Shakespeare with the American Theater of Actors.  Among the shows he has under his belt are The Two Gentlemen of Verona, That’s Amore, Poles Apart, he was Jesus Christ in A Light to the Cross, Dracula in Dracula) and Gringo Honasan in Meldita, performing in regional and international theaters.

He also played guest starring roles in the movie remake of Sabrina with Harrison Ford and as Howard Stern’s double in “Private Parts”.  He also played a Native American Indian on the Dave Chapelle Show.   Most recently, Anthony played  Father Matos in the remake of the Francis Ford Coppola horror classic, Dementia 13; a reporter in the first season of CBS’s Tommy and has had recurring roles in the hit series “Billions” (Season 4) as Ortiz, Daredevil and Luke Cage as the reporter Jerry.  He had a guest starring role as Utuquiel in Comedy Central’s Alternatino and Amazon Prime’s Bronx SIU as an assassin.

Justin Senense, is an American actor/singer of Philippine heritage, most recently appeared in The Actors Fund benefit concert celebrating the music of Neil Sedaka.  He was also seen playing the lead in the award winning indie short film Howard. Some of his favorite credits include, Angel in Rent (Westchester Broadway Theatre), Benjamin in Joseph and the Amazing Technicolor Dreamcoat (National Tour) and Hair (Italian Tour).  He is also a director of cabaret performances and the Director of this show!

Akoni Steinmann recently received his BFA in Acting from Marymount Manhattan College. Credits include Anytown: A New Musical, New Kid (George Street Playhouse), All’s Well That Ends Well, King Lear (Hip to Hip Theatre Company) as well as Tartuffe, A Midsummer Night’s Dream, The Skin of Our Teeth, and An Enemy of the People. Since he served as the MC for this Asian Artists Step Forward concert, Akoni has relocated to Los Angeles to pursue a career in Film and Television.

Violet Vang was a 15-year-old from Madison, Wisconsin when she made her professional debut in this concert.  Prior to the pandemic, she attended high school in Wisconsin and auditioned for dramatic, musical and commercial roles in both Chicago and New York, represented in Chicago by Babes ‘N Beaus agency.

Xiaoqing (Mao) Zhang has been a leading lady in many musicals such as the Off-Broadway show The Emperor’s Nightingale; NAAP Prospect Theatre Company’s Into The Woods concert; Pan Asian Repertory Theatre’s Lost in Shanghai, and the musical An Old Day in Chinatown.  She also appeared in Jonathan Lee’s Musical, Road to Heaven; the Off-Broadway musical Eastbound concert and the Mandarin premier of shows in China such as Avenue Q, Mama Loves Me Again and Spiral Show. She has also sung the interlude and title songs in well-known Chinese national TV shows.  Furthermore, she’s been cast in American TBS comedy show The Detour and other voice over work. As an international actress, Xiaoqing worked with famous directors, music directors and choreographers from West End, Broadway and China. Her awards include: first place in the national competition China Star, second place in The World Karaoke Championship in China region, Creative Award in BTV singing and dancing competition.

Bobby DeLeon (Music Director/Piano)
Bobby started playing piano at 4 years old and was in demand throughout Asia for many years while working as a Music Director for prominent groups or playing piano in Japan, Malaysia, Indonesia and Qatar.  He was a favorite and personal Music Director/pianist for Imelda Marcos, former First Lady of the Philippines, when she would give public performances in the United States. He has conducted and music directed shows for some of the most prominent Philippine stars and performers both in the US and abroad and conducted a number of shows in major hotels in Atlantic City.

The Actors Fund is a national human services organization that fosters stability and resiliency and provides a safety net for performing arts and entertainment professionals over their lifespan. Through offices in New York, Los Angeles and Chicago, The Actors Fund serves everyone in film, theater, television, music, opera, radio and dance with programs including social services and emergency financial assistance, health care and insurance counseling, housing, and secondary employment and training services.

Step Forward Entertainment, an entertainment production and talent management company headquartered in New York City which also represents clients in Los Angeles, Florida and other areas in the US, was founded by renowned producer / talent manager, Robert R. Blume (“Bob”).  With strong roots on Broadway as an Executive Producer of the annual Drama Desk Awards from 1999 to 2018, Mr. Blume saw the opportunity to share his experience to develop and represent talent plus Produce TV, Film and Theatre. Mr. Blume is proud to present this concert as an Actors Fund Benefit in these dire times. www.stepforwardentertainment.com