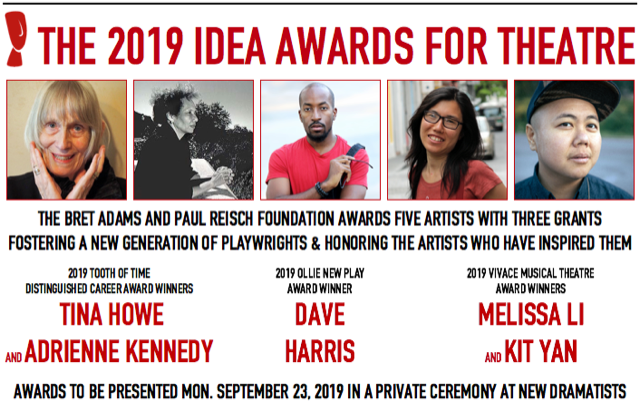 The Bret Adams and Paul Reisch Foundation is pleased to announce the recipients of their 2019 Idea Awards for Theatre; three grants awarded to adventurous new voices in playwritingand musical theatre, as well the visionary playwrights who have inspired and blazed trails before them.

The two inaugural 2019 Tooth of Time Distinguished Career Awards will be presented to Tina Howe (Painting Churches, Coastal Disturbances) and Adrienne Kennedy (Funnyhouse of a Negro, A Movie Star Has to Star in Black and White). Honoring accomplished playwrights who have created significant, idea-driven works throughout their career, the Tooth of Time Distinguished Career Award is given with a $20,000 prize for each recipient.

Dave Harris is the recipient of this year’s Ollie New Play Award. The 2019 Vivace Musical Theatre Award will be awarded to the composer/lyricist team, Kit Yan and Melissa Li. Recognizing emerging talent and original work with ambitious theatrical ideas, both awards are bestowed with a $30,000 prize.

Each of the five artists will also receive a unique hand-carved marble statuette.

The 2019 Idea Awards for Theatre will be presented on Monday, September 23, 2019, in a private ceremony (by invitation only) hosted at New Dramatists.

Theatrical Agent Bret Adams and his partner Dr. Paul Reisch loved the theatre with great passion. As a theatrical agent, Bret shepherded the careers of many actors, writers and directors and designers, including Phylicia Rashad, Judy Kaye, Ruby Dee, Ossie Davis, Sherman Helmsley, Anna Maria Alberghetti, Eve Arden, Christine Ebersole, Kathleen Marshall, Jayne Wyman, Andre DeShields, Kathy Bates, Susan H. Schulman, Jack Heifner, Philip McKinley and Robert Harling, among many others. After Bret and Paul’s passing, in 2006 and 2015respectively, their eponymous foundation was created at their bequest. The Bret Adams and Paul Reisch Foundation champions visionary playwrights in their creation of expansive, illuminating, and idea-driven theatre.  Embracing diversity in all its forms, The Foundation encourages artists with fresh perspectives – particularly those from underrepresented backgrounds – to create idea-driven new plays and musicals reflecting on multivalent  themes including science, history, philosophy, gender, race, politics, sexual orientation, technology, religion, money, global warming, and medicine, among others. Nominations for all threeawards are accepted exclusively from The Foundation’s Board of Artistic Advisors.  For more information, visit www.BretnPaulFoundation.org.

“The Bret Adams and Paul Reisch Foundation has created the ‘Idea Awards for Theatre’ to encourage expansive, idea-driven artworks with inherently theatrical ways of illuminating big ideas and concepts,” says Bruce Ostler, V.P. and Board Member of  The Bret Adams and Paul Reisch Foundation. “With our financial awards, we are encouraging artists to grapple with and dramatize the big ideas that the world is engaged with. This money will give them needed time and space to explore and write.  To that end, we have created three Idea Awards for Theatre, to celebrate pioneering theatrical artists of all stripes: the Ollie Award for the most ambitious big idea play, the Vivace Award for a big-idea musical that makes you want to get up and dance, and the Tooth of Time Award to encourage accomplished artists to continue their personal evolution in examining big ideas. We are giving these Awards to dare these writers to theatricalize something wild and brave.”

“Tina Howe and Adrienne Kennedy have blazed trails through the American theatre” says Andre Bishop, Artistic Director of Lincoln Center Theatre and Bret Adams and Paul Reisch Foundation Advisory Board member. “Their long careers and their distinguished body of work should and must be celebrated. The inaugural Tooth of Time Awards honor these two pioneering playwrights for their glorious pasts and we look forward to the work that lies ahead. We congratulate them and thank them.”

“Dave Harris, Kit Yan and Melissa Li are creating bold work that dares audiences to experience theatre from a new perspective,” says Kirsten Childs, Obie-winning musical theatre writer and BAPR Foundation Advisory Board member. “ We are all proud to celebrate the achievements, past and forthcoming, of these three extraordinary artists, and are thrilled to champion them as they create their most ambitious works yet.”

ABOUT THE 2019 IDEA AWARD FOR THEATRE RECIPIENTS

Tina Howe (2019 Tooth of Time Distinguished Career Award winner).Howe’s full-length plays include: The Nest, Birth and After Birth, Museum, The Art of Dining, Painting Churches, Coastal Disturbances, Approaching Zanzibar,One Shoe Off, Pride’s Crossing, Rembrandt’s Gift, Chasing Manet, and Singing Beach.  These works premiered at the Public Theater, Second Stage, The Old Globe, Lincoln Center, The Actors Theater of Louisville, the Atlantic Theater Company, Primary Stages, and others. Among her many awards are an Obie for Distinguished playwriting, a Tony nomination for Best Play, an Outer Critics Circle Award, a Rockefeller grant, two N.EA fellowships, a Guggenheim, an American Academy of Arts and Letters Award in Literature, the Sidney Kingsley Award, the New York Drama Critics’ Circle Award, a Lucille Lortel Award, the William Inge Award for Distinguished Achievement in the American Theatre, a Lilly Award for Lifetime Achievement, a  PEN Master American Playwright award, an Alfred Sloan Science Foundation award, two honorary degrees, and induction into the 2017 Theater Hall of Fame. She is a two-time finalist for the Pulitzer Prize in Drama and taught playwriting for close to forty years — first in the Department of Dramatic Writing at NYU, then as Visiting Professor at Hunter College since 1990, going on to launch the Rita and Burton Goldberg MFA in Playwriting in 2010, as Playwright-Residence.

Adrienne Kennedy (2019 Tooth of Time Distinguished Career Award winner) continues to influence the world through her art. She was the recipient of the 2003 Lifetime Achievement Award from the Anisfield-Wolf Book Awards, an Obie Award for Lifetime Achievement Award, the Lila Wallace—Reader’s Digest Writers’ Award, the American Academy of Arts and Letters in Literature Award, and was inducted into the Theatre Hall of Fame in 2018. She was also granted a Guggenheim Fellowship for Creative Writing, awarded the Pierre Lecomte du Novy Award, and ended her academic career teaching at Harvard. Kennedy was playwright-in-residence at the Signature Theatre in New York City during their 1996-1997 season. Her plays include Funnyhouse of a Negro, A Movie Star Has to Star in Black and White, He Brought Her Heart Back in a Box, A Rat’s Mass, Mom How Did You Meet the Beatles, adaptations of ElectraandOrestes, and Cities in Bezique, commissioned by Joe Papp for the second season of the Public Theater. Her career has made it possible for her to meet astounding people, which she dreamed of doing as a kid in Cleveland.

Dave Harris (2019 Ollie New Play Award winner)is a poet and playwright from West Philly. He is the Tow Playwright in Residence at Roundabout Theatre Company, a Cave Canem Poetry Fellow, and a Venturous Fellow at The Lark. His plays have been produced or developed at Actors Theatre of Louisville, Roundabout Underground, Manhattan Theater Club, Victory Gardens, The Kennedy Center, Oregon Shakespeare Festival, SPACE on Ryder Farm, The Ground Floor at Berkeley Rep, and Ojai Playwrights Conference amongst others. His play Everybody Blackwon the Kennedy Center’s Lorraine Hansberry Award and Mark Twain Award, and his play White Historywas a semi-finalist for The Relentless Award. His first full-length collection of poetry, Patricide, was published in May 2019 from Button Poetry. Dave received his B.A. from Yale and is a third year MFA playwright at UC San Diego.

Kit Yan (2019 Vivace Musical Theatre Award winner)is a Yellow American New York based artist, born in Enping, China, and raised in the Kingdom of Hawaii. Kit is a Dramatists Guild Foundation Fellow, 2019 Lincoln Center Writer in residence, 2019 MacDowell Fellow, 2019-2020 Musical Theater Factory Makers Fellow, 2019-2020 Playwright’s Center Many Voices Fellow, and a 2019 NAMT selection for Interstate. Kit’s forthcoming works along with collaborator Melissa Li include a production of Interstateat Mixed Blood Theater in March 2020, as well as commissions from 5thAvenue Theater and Keen Company. Interstatewon 5 awards at the 2018 New York Musical Festival including Best Lyrics. Kit’s show Queer Heartachehas won 5 awards at the Chicago and SF Fringe Festivals. Their work has been produced by the American Repertory Theater, the Smithsonian, Musical Theater Factory, the New York Musical Festival, Diversionary Theater, and Dixon Place. They have been a resident with the Civilians, Mitten Lab, 5th Avenue Theater, and the Village Theater. In 2018 Kit founded Translab, an incubator for Transgender and Non-binary voices in the American Theater along with MJ Kaufman and supported by WP Theater and the Public Theater.