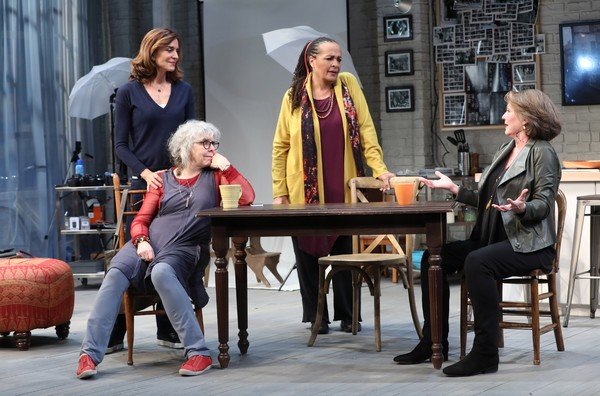 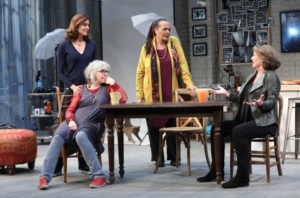 As we get older do we become invisible? That is the question Susan Miller’s 20th Century Blues is asking. The show reminded me of American photographer Nicholas Nixon, who in 1975 took a photo of his wife Bebe and her three sisters. They came up with an idea to make it an annual tradition. The Brown sisters took a photo every year till 2010. The series resulted as a time lapse of 36 years. In 20th Century Blues four women who meet in jail 40 years ago due to a protest,  have gather yearly as Danny (Polly Draper, thirtysomething, The Good Wife) has captured the moment. Now a honored photographer, Danny is being honored at MoMA and wants this series of photographs to represent her work. 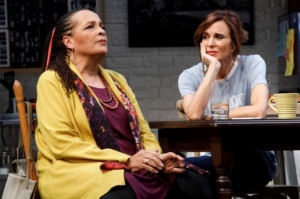 We first meet Danny at the TED Talk where she is explaining her decision as her “brand” has been a different retrospective. Flashing back 3 months earlier, we meet Mac (Franchelle Stewart Dorn) a hard-drinking reporter, lesbian who has been forced to retire. She and Danny had a brief affair in the day. Gabby (Kathryn Grody), a Boston veterinarian is a pot-smoking peacekeeper, who survived breast cancer and is guilt ridden over surviving the death of her healthy husband. Sil (Ellen Parker), a real estate broker has just survived a broken marriage and a face-lift. She fears growing older, because she can’t keep up with the younger competition, due to societies expectations. 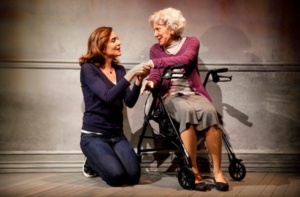 These women have survived life and along the way protest marches, women’s liberation, sexual dalliances, freedoms, restrictions, marriage, childbirth, divorce, cancer, menopause, lost causes and tragedy, now they are trying to hurdle the road map of getting older. When Danny’s asks for her friends’ consent to show the pictures, all hell breaks loose. Sil not only does not want to sign the release, but feels violated. 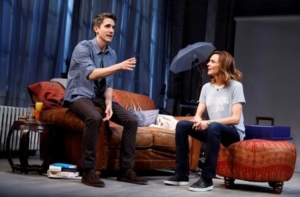 Fear of Alzheimer’s is brought into play with Danny’s mother (Beth Dixon) and youth passing us by as Danny’s adopted son Simon (Charles Socarides) searches for his birth mother.

The direction by Emily Mann and the acting of these five fierce females, allows this discussion to take place. It has long been a fact that once you hit 50 as a women, you are dismissed by society and by the male population. In many cases women are starting over at this point and at times it seems as if the world is against them. It is one thing to be dismissed, another to be ignored.
Miller dialogue is authentic and piercing, if not a little too talkie and with the addition of Danny’s mother and son, it seems as if there are too many subjects being discussed at once.

Where do women go from here? It is though female bonding and friendships that the 20th Century Blues has a chance to sing a different tune.