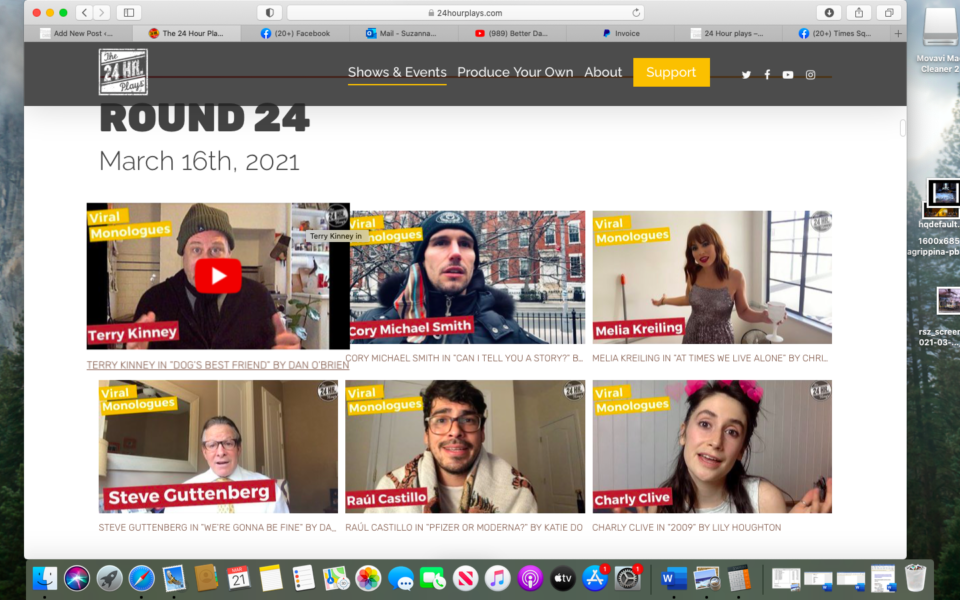 The 24 Hour Plays: Viral Monologues marked their one-year anniversary with a series of unforgettable monologues on IGTV @24hourplays at https://24hourplays.com/viral-monologues/.  Twenty-four actors were paired with twenty-four writers, who have crafted unique pieces especially for their actors.

“In a year of incredible hardship, it’s been an honor to have so many artists gather with us to make new things. Artists have always sustained The 24 Hour Plays, but never more than this year. They held us up, week after week, coming together to explore and celebrate the lives we lead together,” said artistic director Mark Armstrong.  “The 24 Hour Plays: Viral Monologues may have been born out of necessity during this socially-distanced time, but now they’ve become a flagship event, connecting our mission to thousands of new audience members every round. The most meaningful part for me has been all the notes from artists saying that we helped keep their creativity alive. As long as artists continue to find our unique way of working meaningful, we’ll be here to bring them together.”

The 24 Hour Plays has always made work about the most difficult moments in our lives, from 9/11 to Hurricane Sandy to the 2016 election, and the coronavirus pandemic is no different. In 2020, when stay-at-home orders were first issued and theatres shut down across the country, The 24 Hour Plays team was determined to find a way to continue their tradition of making time-limited theatre without physically bringing people together – and thus, The 24 Hour Plays: Viral Monologues were born.

The finest actors and writers from the American arts and entertainment industry have come together to create over 350 original pieces for the weekly Viral Monologues series since its debut on March 17, 2020. Each week, pairs of writers and actors collaborate to write, rehearse, perform and produce new works in just 24 hours. In addition to using their mission-based theatermaking approach in a new way, The 24 Hour Plays have used the Viral Monologues to celebrate and support a host of deserving nonprofit organizations, including their own efforts to develop the young artists who will shape the future of the theater.

New editions of The 24 Hour Plays: Viral Monologues stream on select Tuesday nights on IGTV @24hourplays, on The 24 Hour Plays’ Facebook and YouTube channels, and at https://24hourplays.com/viral-monologues/. The monologues are available to view on IGTV and online for four days after their initial airing courtesy of an agreement with Theatre Authority, a nonprofit organization managed by Actors’ Equity.