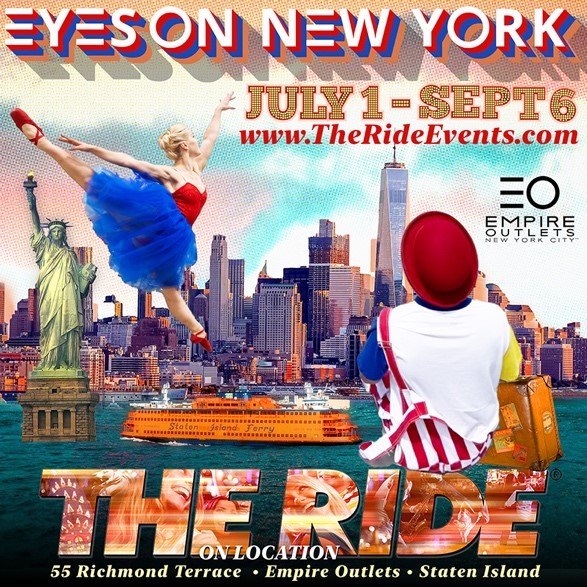 It is with great pride that The Ride’s World premiere of Eyes On New York, opens. An interactive theatrical journey drenched in music, uplifted by dance and driven by renewal, in a new performance space dedicated, created and built to further push the theatrical boundaries of The Ride’s proprietary experiential technology.

On location and in summer residency, Eyes On New York is being produced by The Ride’s Chief Creative Officer Richard Humphrey in association with Director Richard Hankes and Choreographer/Artistic Director Ashlee Rose Montague.

The newly designed theatre space is a collaboration amongst Humphrey, Hankes and Montague.

Presented in theatrical dance, variety acts, acrobatic agility and circus derring-do, the show is guided by a troupe of internationally acclaimed performers who dance New York City’s journey through the last 12 months.

This exclusive engagement plays two to four times a day through Monday, September 6.

1.         The MEDIA and the Press Corps are already “buzzing” about this spectacular celebration.

2.         This interactively dazzling show is the most exciting Experiential Event in the Staten Island Ferry neighborhood.

3.         Empire Outlets is building a theatre specifically for “Eyes On New York.”

5.         The magic is guided by a troupe of internationally acclaimed performers who tell New York’s rollercoaster odyssey through the last 12 months.

6.         The show is being produced Pulitzer Prize winner Richard Humphrey whose work on THE RIDE has attracted over one million RIDERS.

7.         The Director and Choreographer are two of the best dancers in America.

8.         The show is performed overlooking one of the world’s largest and most beautiful natural harbors.

10.       More and more New York productions will soon be hosting their World Premieres at the Empire Outlets’ new theatre.

11.       “Eyes On New York” is welcoming Staten Island to the Broadway community.

12.       Everyone is bracing themselves for the forthcoming avalanche of awards.

14.       The Staten Island Ferry also delivers you right to the new performance space and the show.

19.       THE CAST tells mesmerizing stories on stage through their physical genius.

20.       Their incredibly balanced bodies are prepared to deliver the impossible.

23.       You can get something to eat at the Empire Outlets before or after the show.

24.       You can go shopping at the Empire Outlets before or after the show.

25.       You can relax and enjoy the world-famous view of Manhattan at the Empire Outlets before or after the show.