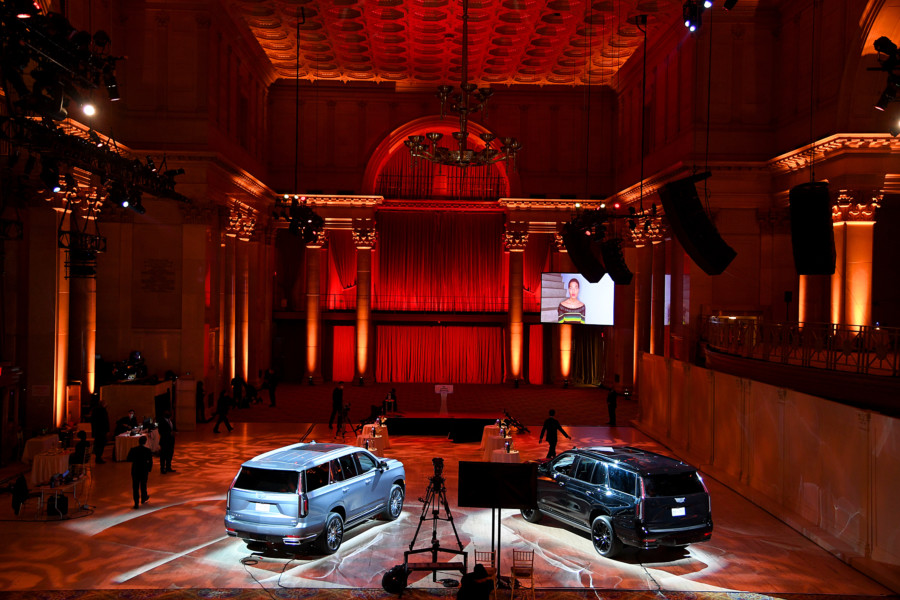 The beloved ceremony made a glorious comeback despite the on-going battles of the pandemic as the production made its way home to the landmark venue. Here in the historical ballroom Gotham IFP Awards made its own legacy and paid tribute to the entertainment industry with a toast by Robert Hall Winery.

Winning Best Feature and the Gotham Audience Award was “Nomadland” by director Chloe Zhao. The award for Best Documentary was presented to two films: “A Thousand Cuts” directed by Ramona S. Diaz, which powerfully follows Maria Ressa, a renowned journalist who has become a top target of President Rodrigo Duterte’s crackdown on the news media in the Philippines, and Garrett Bradley’s “Time,” which charts the 20-year journey of Sibil Fox Richardson, as she fought for the release of her husband serving an excessive 60-year prison sentence, kaleidoscopically interweaving years of home movie diaries that movingly reveal the love and loss in this family’s separation.

Winning the award for Best International Feature, given for the first time this year, was “Identifying Features,” directed by Fernanda Valadez, which tells the story of an increasing dangerous journey for a Mexican mother searching for the truth about her missing son who disappeared after leaving to cross the U.S.

Riz Ahmed was voted Best Actor for his masterful and riveting performance as Ruben, a heavy-metal drummer and recovering addict confronted with a sudden loss of hearing and the prospect of a radically altered life in Sound of Metal.

Winning the award for Best Actress was Nicole Beharie for her delicate, emotionally honest, and translucent performance as a financially struggling, hardworking mother who, regretful of her own missed opportunities in life, desperately wants more for her teenage daughter in Miss Juneteenth.

The award for Best Screenplay went to the writer-directors of two films: Radha Blank for “The Forty-Year-Old Version,“ her loosely personal, comedic satire about a once-promising playwright still pushing for visibility in New York’s art world firmament as she hits 40, and Dan Sallitt for “Fourteen,” his remarkably subtle and devastating dissection of the ebb and flow of an intense female friendship over 10 years.

In the Gothams’ “breakthrough” categories, Kingsley Ben-Adir won the Breakthrough Actoraward for his dynamic and layered performance as Malcolm X in One Night in Miami…, adding charisma, strength, and a touch of vulnerability to this man with demanding expectations of his friends (Cassius Clay, Sam Cooke, Jim Brown) and of himself. Andrew Patterson was voted the Bingham Ray Breakthrough Director award for “The Vast of Night” for achievement in a first fiction feature, displaying dazzling directorial virtuosity in this retro sci-fi story covering one night in a 1950s-set New Mexico town in which two young people encounter a mysterious radio signal that could be of extraterrestrial origin.

Career Tributes were also given during the ceremony to actors Viola Davis (presented by George C. Wolfe) and Chadwick Boseman (presented by André Holland), director Steve McQueen (presented by Lupita Nyong’o), and the Industry Tribute to producer Ryan Murphy (presented by Nicole Kidman).

The Independent Filmmaker Project (IFP) champions the future of storytelling by connecting artists with essential resources at all stages of development and distribution. The organization, under the leadership of Executive Director and award-winning producer Jeffrey Sharp, fosters a vibrant and sustainable independent storytelling community through its year-round programs, which include IFP Week, Filmmaker Magazine, and the IFP Gotham Awards.

Suzanna BowlingJune 26, 2022
Read More
Scroll for more
Tap
The Glorious Corner
What to Watch in The New Year: Jan 13