Heading out to the Drury Lane, I thought we were in for a night of neatly pressed nostalgia to help wind down the year. Instead, director Michael Heitzman has struck pay dirt with his remarkably bold and innovative reinterpretation of the Broadway classic, 42nd Street. Featuring an impressively diverse cast, influenced more by the recent revolution known as Hamilton than the traditionally #OscarsSoWhite casting normally associated with this 1980 Tony Award-winner for Best Musical, this Street’s production is definitely “In The Money”.  The music by Harry Warren with lyrics by Al Dubin has been reinterpreted as well, this time with a heavily jazz-infused funky orchestration, lead by musical director, Roberta Duchak . Think The Color Purple meets Smokey Joe’s Cafe. Taking nothing away from the original book by Michael Stewart and Mark Bramble, and based on the Novel by Bradford Ropes, we still get the story of a young Broadway ingenue who is in the right place at the right time, saving the show and becoming a star. However, this contemporary retelling of 42nd Street, is more Stomp! and Bring in ‘Da Noise, Bring in ‘Da Funk influenced as seen through a BET filter. More Savion Glover than soft shoe. All of these changes makes this the most brazenly dazzling romp ever seen mounted at the Drury Lane. 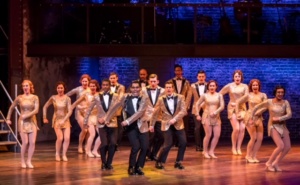 The cast assembled here is a dream. Starting with Kimberly Immanuel as Peggy Sawyer, the NYC newbie with roots that stretched all the way back to Allentown, PA. Her solid dance moves and lovely voice make her a definite star on the rise and an ideal choice for this part. Phillip Attmore, last seen dancing on the Great White Way in the company of Bette Midler in Broadway’s Hello, Dolly!, Audra McDonald in Shuffle Along and Kristin Chenoweth in On the 20th Century, now journeys to Illinois to play Billy Lawler, his remarkable tap dancing skills rivaling the late, great Gregory Hines. As the aging demanding diva, Dorothy Brock, Suzzanne Douglas has most of the vocal heavy lifting and proved herself more than up to the task. The sun is certainly not setting on her anytime soon. Perennial Drury Favorite, Gene Weygandt, is a more huggable “Daddy Warbucks” type than cynical and power-hungry producing giant, Julian Marsh. Rounding out the leads, Donica Lynn also returns to her familiar Drury stomping grounds, this time as Maggie Jones, a motherly playwright with punch and panache in spades. The remaining dozen members of the troupe are a team of skilled and powerful hoofers pushed to their limits by unending, athletic dance moves. The tapping on top of a slew of coins poured into pedestals, act one finale of “We’re In The Money” is worth the price of admission alone and must be seen live to be truly appreciated. 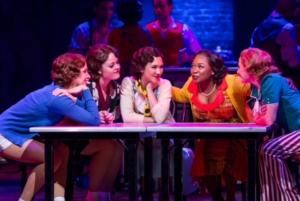 Speaking of dance, choreographer Jared Grimes electrifying work simply dazzled. The casts’ moves during “Gypsy Tea Kettle” was something straight out of Stomp!  Again, an approach you would never expect to see on display from a suburban remount of a Broadway classic. The train car themed “Shuffle Off to Buffalo” is a dizzying and dazzling smorgasbord of tap, jazz, comedy and talent. Emilio Sosa’s costumes astonish, as does Claire Moores’ wig and hair designs. Collette Pollard’s stage within a stage scenic design is a cleaver take, perfectly punctuated by Mike Baldassari’s lighting. 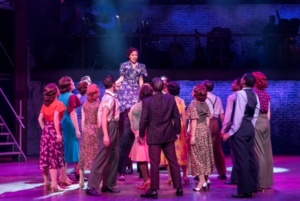 A remarkable retelling of the show business dream come true, effortlessly enveloped by a remarkably talented and diverse cast, Drury Lane’s 42nd Street is a hit. This revolutionary re-visioning is the must see event in a crowded theatrical season. Daring dance numbers, valiant and pronounced choreography and vocal skills that could fill a couple football stadiums are just a few of the razzle-dazzle highlights of this visionary production. To borrow from the titular song’s lyric “where the underworld can meet the elite” get yourself to 42nd Street! 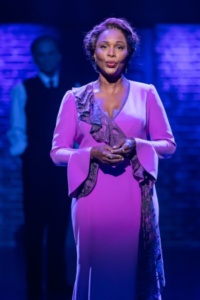 42nd Street is now playing at the Drury Lane Theater through January 7, 2018 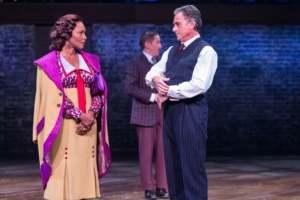 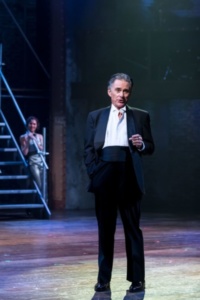 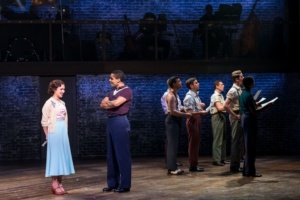 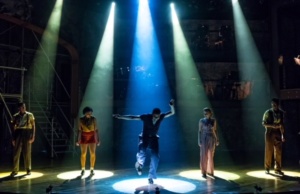