$450,000 Per Person to Families Who Illegally Crossed Into The US and Were Separated. What is Wrong With that Picture? And It Gets Worse. 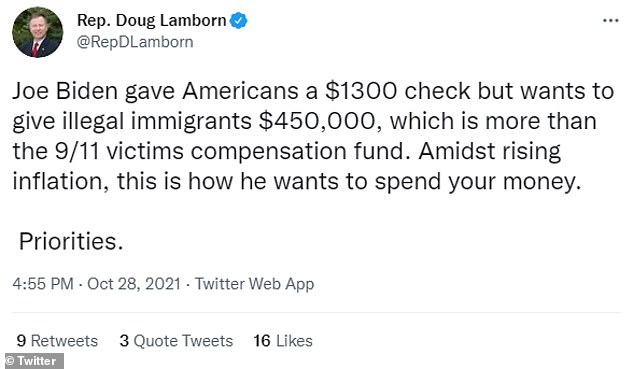 $450,000 Per Person to Families Who Illegally Crossed Into The US and Were Separated. What is Wrong With that Picture? And It Gets Worse.

Rep. Dan Crenshaw tore into the Biden administration’s as they plan to pay migrant families separated at the border after crossing illegally $450,000 per person. This is higher than service members who die in combat. The US government only offers $100,000 for those who die in combat. Their next of kin get an insurance payment of $400,000. As for drone strike deaths the US government pays almost nothing to those abroad. In 2020 alone, US drone strikes killed, injured and obliterated the homes of dozens in the Middle East and no compensation was awarded. The 2020 National Defense Authorization Act allocated $3 million for condolence payments, but the Pentagon failed to dole it out, according to its annual report to Congress.

Americans got a measly $1300 check during COVID but illegal immigrants $450,000, more than the 9/11 victims compensation fund.

As migrants continually break our laws many families are being released into the interior with no vaccines, sick and

Lawsuits allege that the separated children were housed in poor conditions, and sometimes suffered from malnutrition or heat exhaustion but they came here with no money and illegally. They seek a range of payouts, averaging $3.4 million per family, but the fact is we should be charging them.

Michelle Brane, head of the Family Reunification Task Force, said that the Biden team has only been able to reunite 52 of the over 1,000 families separated under the policy who have not yet found each other. Whose fault is that? Who is paying the salaries of those who take care of them and try to reunite them? Many are drug mules, but God forbid we talk about that.

A record 1.7 million families entered the US illegally in 2021. Over 479,000 unaccompanied children were what we have had to account for.

In the meantime an organized caravan of 5,000 migrants are about to reach the United States-Mexico border. Doctors have so far treated at least 15 children and 12 adults for pneumonia. The group consisting of Africans, Haitians, Central Americans and South Americans

U.S. Customs and Border Protection (CBP) has increased since Biden stepped into the White House.

In Texas, about 1,000 state police officers and Texas Rangers have been assigned to monitor the border, readying to guard against the surge. And who will pay this cost taxpayers.

And where is. a Biden, our Congress and our Senate? They want to reward this behavior with money. As we are forced to get vaccinated they are freely let in and bussed to a town near you. Don’t believe me New Yorkers? Read Here!

Maybe this is how Biden plans on funding his his $1.75 Trillion spending package, since the nobody will put it through.

Stephen SorokoffNovember 15, 2021
Read More
Scroll for more
Tap
Vaccine Mandate For NYC Workers Is Pushed Back Until Monday Could This Have Something To Do With The Election
26 Firehouses Are Forced To Close As Firefighters Defend Their Rights To Not Be Vaccinated