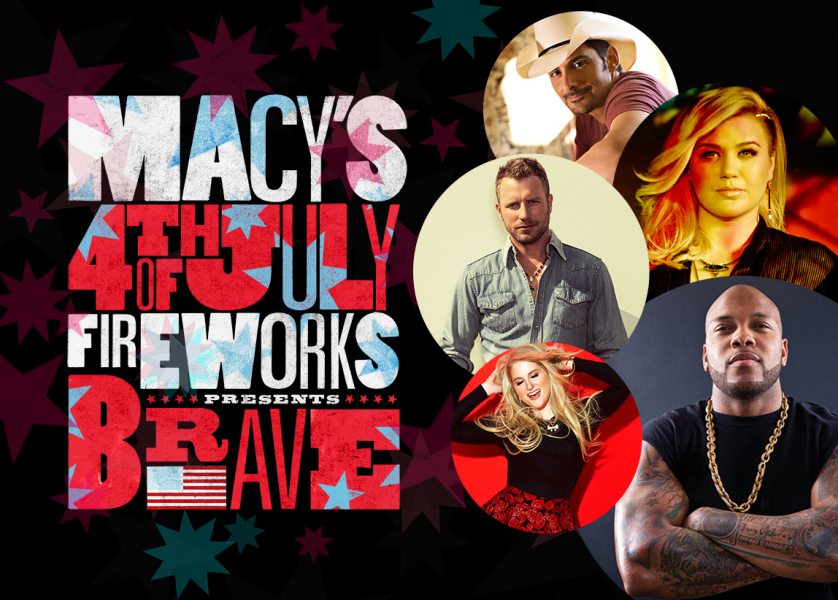 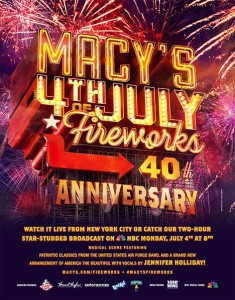 Hundreds of thousands of people are expected to crowd the East River shoreline to experience the annual Macy’s 4th of July Fireworks celebration. This year the fireworks show is taking place in New York’s East River. Macy’s will be shooting off fireworks from five different barges. One barge will be just below the Brooklyn Bridge and the four other barges will be situated in between the Williamsburg Bridge and the Midtown Tunnel. With more than 56,000 shells set to launch from five barges, the 25-minute display kicking off at approximately 9:25 p.m. will be Macy’s largest since its celebration of the new millennium in 2000

There are two ways to take in the fireworks display. You can watch on the NBC broadcast which starts at 8 p.m. or you can watch in person.

Macy’s sets up viewing areas around the city for people who want to see the fireworks up close. But make sure to get there early as these spots get crowded very quickly.

The entire spectacle includesperformances from a number of special musical guests including Kenny Chesney, Meghan Trainor, 5 Seconds of Summer, Pitbull and DNCE. The pyrotechnics are choreographed to mirror the crests and troughs of the score, which this year includes songs like “Simple Gifts,” “This Land is Your Land,” and, at its climax, Jennifer Holliday’s rendition of “America the Beautiful.” During the special, as an added bonus Waitress composer and Tony Award nominee Sara Bareilles will perform a solo version of Broadway for Orlando’s “What the World Needs Now.” You can tune in to the music on radio station 1010 WINS to hear this billboard topping number.

New this year the smiley faces will blink and witht he help of pyrotechnics: the letters U.S.A. will be displayed in the sky this year.

The Macy’s 4th of July TV broadcast will be hosted by TV hosts Willie Geist and Tamron Hall. You have probably seen both co-hosting the third hour of “Today.” In addition to hosting “Today” Giest is the host of NBC’s Sunday Today and a co-host on MSNBC’s political program “Morning Joe.” Hall pulls double duty as the anchor of MSNBC’s “Live with Tamron Hall.”

If you are looking for a one of a kind night the South Street Seaport is once again hosting their Festival of Independence. This two day event, has plenty of with enough music, food and drink to satisfy anyone. Perfect for the 20 something crowd who loves loud and boisterious. Cost is $60.00 per person and starts at 5pm.

Right next to the Seaport is Pier 15, home to a bi-level waterfront park that serves as a green space for those looking to find a little peace. The esplanade is only two piers down from Pier 17 — exactly where the barges are parked. With unparalleled views of the fireworks as it’s hard to get any closer than than this, but it comes with a price as it is  not open to the public on July 4th, and prices are pretty steep. A ticket can run you $109 to $1,596 and you need to be a VIP.

An open bar and all-you-can-eat buffet will be on hand at Industry Kitchen, which is capitalizing on its South Street address and promising unbeatable views of the East River fireworks. The party gets started at 5 p.m., giving you plenty of time to dine and imbibe before the gunpowder goes off. 70 South Street at Maiden Lane  $94-238 per person

At 1,776 feet above, One World Trade Observatory will be open for business for anyone who wants a sky-level view of the festivities. Expect a 360-degree view means your pick of any fireworks display from New Jersey to Midtown to the Brooklyn Bridge. Ticket holders enjoy an open bar and snacks during the two-hour event, starting from 8 p.m. General admission is $250 per ticket for the privilege, while VIPs are expected to pay $325.

Get your red, white and cruise on aboard several of the local boats. Again pricey with costs starting at $175.00. Remember T2C has a special for you for only $149.

Do not forget to tune in with the Makelight app.This free app synchronizesphones by playing a specially designed lightshow that matches the color, tempo and dynamic explosions of the fireworks. Makelight has built live-event software that takes triggers from pyrotechnics specialist Souza, which is running the countdown that launches the fireworks. Once the countdown starts, a Makelight software controller becomes aligned and starts to sync up the phones.

Lawrence HarbisonMay 23, 2022
Read More
Scroll for more
Tap
See the Fireworks With a Spectacular View on The River: 4th of July Special For T2C Readers
Happy 4th of July From T2C