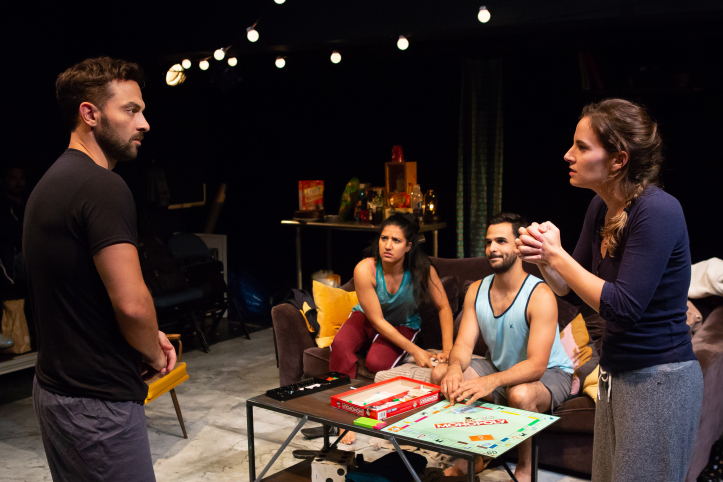 The storms are all coming this week. Making landfall in force in off-Broadway houses all over town with mixed levels of successful destruction and representation. As I wrote yesterday in my review of both Hurricane Party and Meaningful Conversation,the gathering together of friends and loved ones when a storm or disaster is fast upon us is as natural as familial bonding and alcohol (that’s a joke, mom), and Lesser America‘s production of Catya McMullen’s fascinating new play Agnes is no exception.  It arrives on our shore the very night that Hurricane Florence started battering the coast line of North Carolina with heavy flooding, power outages, and strong winds. It’s a strange confluence, these three plays and one Florence, all arriving in the same week, and all revolving around the same eye of a storm. But Agnes, as directed with a clear eye on the barometric pressure by a playful Jenna Worsham (Broadway’s The Parisian Woman), rises above the winds and waters. In reality, this play has very little to do with the approaching hurricane discussed in the dialogue, other than a construct to bring these five souls together in one confined apartment. It’s really about the storm inside Charlie’s brain that is chemically just as powerful as the force of nature that swirls with a vengeance outside that apartment. In the written text, Agnes tries hard to deliver a neurological atypical experiential education in sensory overload (that is, if we are neurotypical) with fairly positive results, but for atypical others, like the lead character, Charlie, played with a dynamic attention to detail by the talented and appealing John Edgar Barker, it may be a difficult and challenging reality.

In the director’s note, we are told that autism effects 1 in 59 children in the United States with over 50,000 autistic teens becoming adults each year.  Many outside of the field still refer to this developmental disorder as “Asperger’s“, but this term that has been outdated since 2013, has been replaced and redefined by the CDC as ASD, or Autism Spectrum Disorder.  As it is with so many neurological and psychological disorders, ASD is much more useful of a tool when seen and explored through the construct of the spectrum, much like degrees of refraction that vary according to wavelengths in nature and mathematics, rather than a black and white dynamic. “Wherever one is on this spectrum, there is a common misconception that those affected by ASD lack empathy“.  In that notion, Agnes, much like Charlie, is on a research mission, to enlighten and enrich.  He goes off unannounced in search of the concept of empathy, through some wonderfully written and performed monologued interactions, hoping that these poignant experiences from strangers will help him dissect human emotional responses typical of those around him. He is desperate to learn how to be more empathetic so he may engage mentally and physically in more mature and evolved relationships, but he might have it all wrong. He, as he is told by an old childhood crush, might actually be someone that feels far too much inside; and therefore he has a complicated sensitivity to emotional stimuli that results in the overwhelming of his circuits and a feeling that ricochets beyond his control. “There are powerful forces at work in the ASD brain, a result of chemistry and environmental factors that can, at times, fuse into a perfect storm“.

In the well laid out apartment, courtesy of the talented scenic designer, Angelica Borrero (EST’s Dido of Idaho), Charlie has finally returned home from his spontaneous adventure. His younger sister, June, played with a neurotic edge by the clear minded Laura Ramadei (EST/Youngblood’s The Year of the Rooster), her engaged girlfriend, and their manic roommate are naturally quite relieved by his reappearance, especially since his disappearance has kept them all, especially June, frantic with worry. With too many rolls of paper towels piling up and crashing down on June, she acknowledges that she feels a huge responsibility for her brother who is neurologically atypical and difficult for her to connect with. In her mind, he is still a little boy in need of care, but to us, it is apparent that he is indeed quite the handsome virile young man looking into the future and wanting more. He definitely has some difficulties navigating the world that swirls around him, like an intense low pressure system, but he also seems to want some independence from his dutiful sister and her constant barrage of questions and concern. And he will have them, whether she likes it, allows it, or not.

The hurricane is coming, most definitely, both outside and in, and it seems that inside this small thin-walled apartment each of the inhabitants lookin for shelter has brought their own storm along with them. June’s girlfriend, Elle, the future medical school student, played robustly and intelligently by Mykal Monroe (webseries ‘Ariel + Miranda + Fate‘) is overly stressed out and desperate, trying to understand both anatomy and her girlfriend’s over-anxious psychology.  The hyper and child-like roommate, Ronan, played with an ADD-edged energy by the well cast Hiriam Delgado (recent graduate of the NYU Graduate Acting Program) has a few, to say the least, issues floating around with him in his inflatable prop that perfectly accessorizes his mentality. To be honest, as written, Ronan doesn’t really add much to the overall structure and metaphor beyond being the impulsive child who invites the tornado named Anna, played by the detailed Claire Siebers (Austin Pendleton’s The Workshop) into their home. Anna has deep twisted roots inside the brother and sister’s family history. She’s complicated and uneasy, spiraling in her own brand of traumatic tension, and Siebers plays her solidly with a deep and concentrated understanding of the wild-child firecracker that she is.

Trapped together against a storm, they all float around bumping and jumping into one another, discovering just how difficult it is to understand the people you love and are connected with. Tenderly longing for connection on all points on that spectrum, they all portray the vulnerability of engagement, forcing June to see her brother as the adult person he truly has become. The actors are beautifully focused and on target with the complications presented, flaying around as if caught in the erratic waves of a typhoon but surviving the onslaught triumphantly.  It’s solid and a much more thoughtful approach to the confrontations of colliding systems, with a more structurally sound theme than the other fortresses built in Meaningful Conversationand Hurricane Party. You’ll be moved and enlightened, forgetting about the storm brewing outside, as the hurricane indoors is far more compelling than any other possible constructs stirring on the theatrical horizons. Take shelter in the vulnerability of Agnes, and feel the full spectrum of humanity, both typical and neurologically atypical, surround and engulf you.