60th Anniversary and Reunion of the Cast of West Side Story

60th Anniversary and Reunion of the Cast of West Side Story 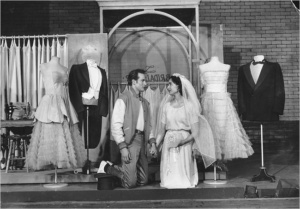 West Side Story opened on September 26, 1957 with starry credentials. The groundbreaking musical went on to spectacular success. A truly once in a lifetime event that may never occur again as Chita Rivera and Carol Lawrence, who originated the roles of Anita and Maria, lead the 60th anniversary reunion of the cast September 27th. Also announced to take part in a public panel of original cast members are Grover Dale (Snowboy), Martin Charnin (Big Deal), and Tony Mordente (A-Rab). The event is being organized as a benefit for the organization Dancers Over 40, on whose board both Rivera and Lawrence serve. The 8 PM panel will take place at St. Luke’s Theater, 308 West 46th Street. 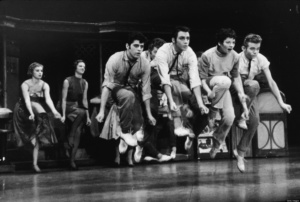 Charnin will moderate the panel, which will feature stories about what it was like backstage during the final weeks before the opening. Also scheduled to take part: Marilyn D’Honau (Clarice), Ronnie Lee (Nibbles), George Marcy (Pepe), Liane Plane (Marguerita), Jaime Sanchez (Chino), and David Winters (Baby John). The panel is scheduled to be videotaped and donated to the Jerome Robbins Dance Collection of the New York Public Library for the Performing Arts at Lincoln Center. 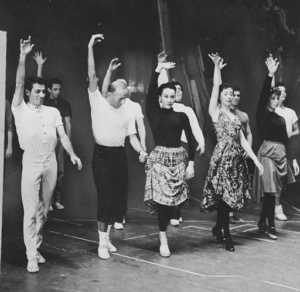 Matt Rodin will host the event, which will  feature live performances by Drama Desk Award winner Jay Armstrong Johnson (On the Town), along with surprise guests.  On hand will be displays of video and photographs chronicling the creation of the show based on Shakespeare’s Romeo and Juliet. Special music arrangements by Ross Baum with music direction by Curtis Reynolds complete the event.