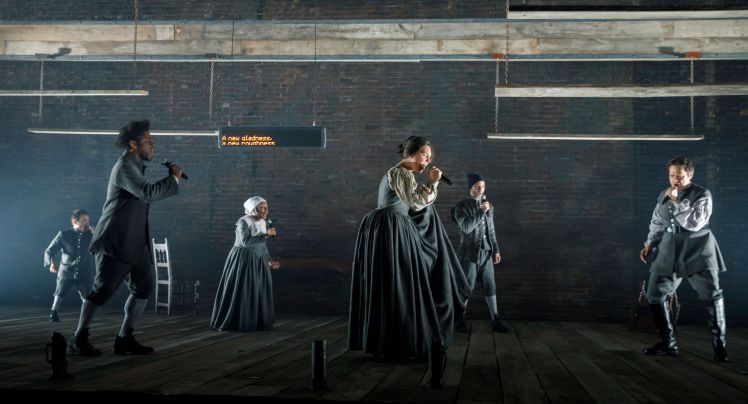 Back in 1991, Light Shining in Buckinghamshire, a play written by Caryl Churchill (Escaped Alone, Cloud 9) had its American premiere at the New York Theatre Workshop directed by Lisa Peterson with the incredible Cherry Jones, Bill Camp, and others. I must admit that the previous cast gave me am envious chill. That earlier production was the beginning of a multi-decade collaboration between Churchill and the NYTW, culminating with Usual Suspect and director Rachel Chavkin (Three Pianos, Hadestown) bringing this revival to the light shining once again.  It’s a tough piece, I’ll tell you that. Not an easy chair english tale, but a complicated piece of historical story-telling, drastically unique, wrapped around a particularly turbulent time within the movement that brought forth the English Civil War of the 17th Century.  Workshopped by Churchill and the Joint Stock Theatre Company back in the mid-1970’s, the piece evolved through numerous rewrites with a communal rehearsal process to become this dense and intense look at the religious earth that surrounds this piece of history; a period, I must admit, I knew little to nothing about.  At its political center is the fascinating yet divergent 1647 Putney Debates, a series of actual discussions that took place after the seizing of the City of London from Presbyterian opponents by the New Model Army. The participants, mostly made up of mostly Levellers, concerned themselves with the makeup of a new constitution for Britain.  It is miraculously recreated by Churchill using surviving historical texts, including the writings of Laurence Clarkson and Abiezer Coppe, two prominent Ranters, augmented by fictional characters and circumstances. And in this production, with microphone stands and swivel seats, the players argued as if they were at a university panel having a debate on human rights, which in some ridiculously brilliant way, that is exactly what is happening.

It sounds a bit dry, I must say, when reading an outline before hand, but the actual creation from Chavkin is captivating, for the most part.  Playing with historical semi-realness, mixed heavily with modernisms, the play glides forward slowly, sometimes too slowly, filled with about a hundred times more references to God then I tend to want to tolerate in a lifetime. Leading up to those infamous debates about the power dynamics within Britain, Churchill starts us off by guiding us through the countryside of England and introducing us slowly and surely to the disenfranchised poor, grappling with the concept that they are shackled to a system of government that gives them no say or representation. The scenarios are sometimes intense and sometimes overblown, filled with references to God and power.  The poor are thrown aside inhumanely by the people in power, cast to the side of the road to fend for themselves against the cool night air. The trial of a beggar woman (Spahr) is intense and sad, like the loud scream of a silent woman lost in the woods. Tragic but routine, giving rise to a questioning that we can understand all to well.

The 16th century Protestant Reformation is said to have disrupted centuries of religious hierarchy by changing the way people feel connected to God.  The Parliamentarians, led by Oliver Cromwell believe that the current King Charles I is unfairly taxing the people of the land, and preach to the masses convincing them to rise up against the Royalists, those loyal to the crown. These preachings, magnificently orchestrated to parallel the T.V. evangelists of our time, scream mightily into microphones pressuring and convincing the struggling to join into a religious-based Civil War, presenting a belief that the King is corrupt. It’s uncomfortable to sit through, as the orators are intense, but there story is political, taking apart the bible for political means, using its words as they see fit.  Once again, we understand the relevance to the here and now.

Personified by a nimble and talented cast of six; the invincible Vinie Burrows (Soho Rep’s Samara), Rob Campbell (NYTW’s Mad Forest), Matthew Jeffers (Flea’s The Mysteries), Mikéah Ernest Jennings (Signature’s Drowning), Gregg Mozgala (MTC’s Cost of Living), and Evelyn Spahr (“The Post“), step forward as the multitude of characters stating their position while inhabiting roles not based on gender, age, or any such device. They hand off the same roles to different actors like a relay race, following the specified notes of Churchill, suggesting that parts should be swapped with the same character being played by different actors. The device gives us a very intense, albeit sometimes confusing, attachment to these souls, keeping us on our toes trying to stay attuned to the growing conflict and its resolution. If it wasn’t for the subtitles in the back, I might not have been able to follow this tale as well as I did, and even with that crutch, I wouldn’t say I was able to completely.

Without the contextualizing notes in the program and the projected dialogue in the back, the escalation of the Civil War and the aftermath might have left me lost and detached.  As is, this play is a very talkative treatment of a time when everything, including the earth, feels utterly broken down, a slice of history that seeks freedom without ever knowing where it could be found. From the moment this play breaks out in a unified dynamic structure of song, with original music & music direction by Orion Stephanie Johnstone, draped in the emotional vexing grey and white costumes, by the inventive Toni-Leslie James (Broadway’s Jitney) that both embrace and fly against the ticking of the 17th Century clock with brilliance and ease, and shrouded by a stark and intense hazy white back-light designed impeccably by Isabella Byrd (Juilliard’s Everybody), the debate flies forward.  It centers on the Kingdom of Christ and Jerusalem in England cutting through the mesh and railing against one another in a never-ending diatribe of religious furiousity.  It’s overwhelming at times, like being trapped on a Sunday morning in the living room of some religious Aunt or Uncle, forced to watch the television evangelists speak endlessly about a God you want nothing to do with. It’s oppressive at times, in a way that makes one want to turn away and not look into the light for fear of what we might see.  And it seems at times to go on and on, far longer than what is tolerable.

That infamous debate also seems to rattle on and on, with the base of the argument revolving around power and tyranny. The underlying concepts are fascinating, especially when layered on top of the structural interaction designed by Chavkin, and the astounding sound design work by Mikaal Sulaiman (PR’s Rape of…), presented and discussed impressively on the raw plank floorboards of the perfect staging designed by Riccardo Hernández (Public’s Mlima’s Tale). But as the Putney Debate flails forward gathering steam and heading towards no where, the out of control process and discussion start to melt into one loud, endless, and repetitive battle, with the outcome sadly predetermined. Politics and religion, debated by passionate speakers yelling into microphones at opposing ends of a political spectrum tends to bring us nowhere, and in the Light Shining in Buckinghamshire, the battle is not fast or decisive, but long, wordy, and drawn out.

The second half slips into an even more free-floating discussion of God, much like the recent revival of Saint Joan over at the MTC. Fortunately, this production is saved by the director’s very focused point of view.  Chavkin, through Churchill, has a lot to say about the disenfranchised using modern cues and parallels, giving us a thoroughly eclectic oratory of God and the earthbound in the past and future tenses.  The actors deliver their long-winded monologues beautifully and meaningfully, reaching and finding the humanity within the food of life and the stink of death in the screams of the sick mother.  God is seen as a big bully to some of these IPA drinking souls, and the new world order is just the same squires enforcing rules with a different title on their lapel.  Act two swims into a territory that drags us forward into a landscape that wore me out some. They stampede on and on about where God is and what God says, as if they know. God moves so fast, says one, but sadly, in Light Shining in Buckinghamshire, it doesn’t move fast enough to keep me as thoroughly engaged as I wanted to be. The craftsmanship is outstanding and impressive, the cast perfect, the history fascinating, but the never ending preaching becomes agitating, as if I’m being attacked by an army of tyrants while trapped in a church pew. I never had to go to Sunday school as a child, and this play made me glad for that mercy.