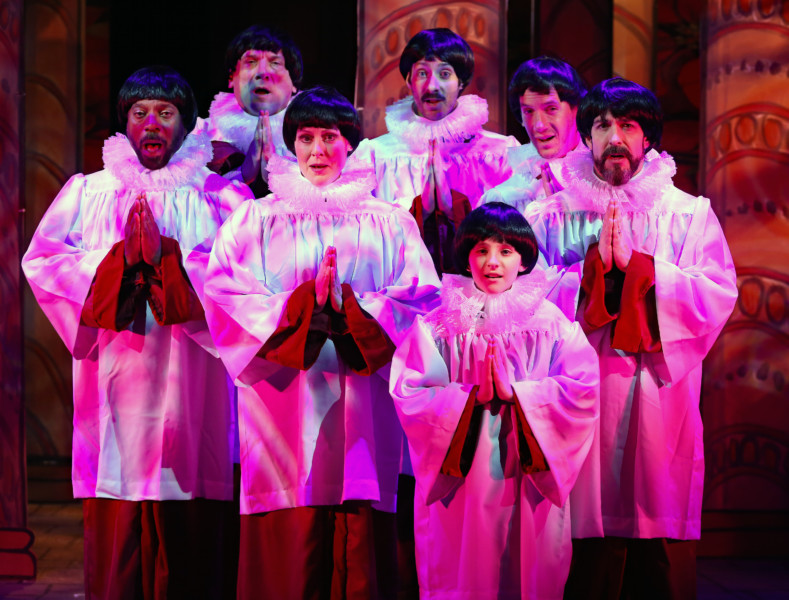 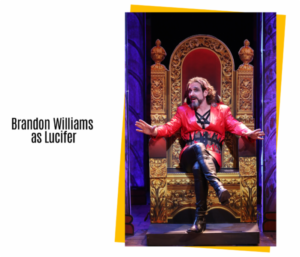 The set by James Morgan sparkles. The direction and choreography by Bill Castellino, enhances the script and musical numbers and the cast gives their all to the satirical material of Christmas in Hell, Book, music, and lyrics writer Gary Apple (writer for The Simpsons and other TV sitcoms and variety shows) gives it a college try, the problem is everything doesn’t gel. 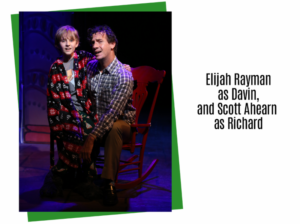 In 1964 a tainted fruitcake from Hell was passed down. In present time eight-year-old Davin (the adorable Elijah Rayman) decides to eat a bite and ends up in hell for Christmas. When his school calls him “f-u-c-k-e-d u-p”, the detective (Dathan B. Williams) questions his father Richard (Mel Gibson look alike, Scott Ahearn). We learn that Davin was taken to hell instead of mass murderer Charles Manson, who was a patient in the same hospital, because he was busy signing autographs and taking selfies with the staff. The boogyman (Zak Risinger) Carl, has left a banjo in the closet, Galiana (the scene stealing Lori Hammel) has the key to hell and Satan ( a rock Brandon Williams) wants Davin as his son. When the priest (wonderful bass, Ron Wisniski) saves Manson’s soul, God (Donna English) refuses to help. In the end the power of a father’s love saves all, as there is a room in hell where Christmas is 365 days a year. 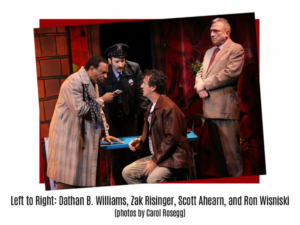 This show which seems more like sketch comedy, is highly irreverent, sardonic and cynical. It seems written for the juvenile side, but I felt sorry for the man in front of me who brought his young child, because I certainly wouldn’t want mine there at that age. It is inappropriate for children. It does however have a redeeming ending. It just seems unpolished and not ready for prime time.

The band led by conductor Logan Medland on keyboard, Tomoko Akaboshi on violin, Darren Lucas on guitar and Mark Papazian on drums was well done.

Tyler M. Holland’s fun costumes and the hellish lighting by Yael Lubetzky’s added to the piece.

Mr. Apple draws characters that are caricature that are overblown, but lack comedic timing. Even his songs which have decent lyric structure fall flat because musically they just aren’t mature enough.

This show won show scores “Best of The Fest” Readings Award in 2017 at The New York Musical Festival. I have to wonder who was voting, because I saw every show that year and this was definitely not the best. There were some great shows that year.

For those who hate Christmas and think that a big f**k you is the way to go, this show might be right up your alley. Me, I’ll take the heartwarming and musically brilliant All is Calm at the Sheen Center.

Suzanna BowlingJanuary 24, 2023
Read More
Scroll for more
Tap
All Is Calm at the Sheen Center: One of the Best Shows of the Year
Countdown To Christmas: CD’s For Your Stockings