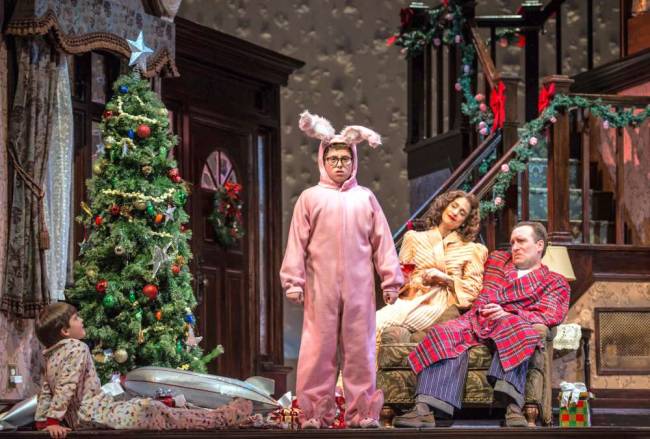 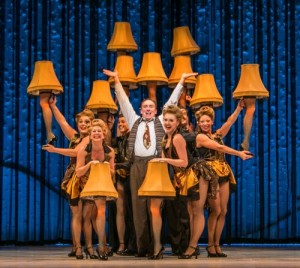 I have seen 4 different productions of A Christmas Story The Musical. I adore the music by the brilliant team of Pasek and Paul and I cry every time the father gives Ralphie the much wanted Red Ryder. If you noticed that the spirit of Christmas is missing this year? If you are looking for heart, soul and that seemingly illusive Christmas Spirit, look no farther than A Christmas Story, the Musical  at Paper Mill Playhouse. This show, whose strengths include family values, a terrific score and a book that not only has humor, but warmth, making even the most unsentimental wish for a family musical come alive, in astounding ways. 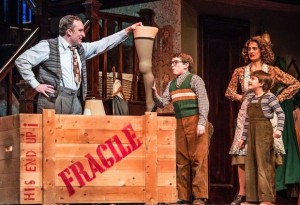 The story is simple. Jean Shepherd is reliving those moments you tuck away like a gift and remember all your life. Flash-back to a small-town in Indiana, circa 1940’s. 9-year-old Ralphie (Colton Maurer,  Judah Immanuel at some matinees) wants one thing and one thing only for Christmas: a Red Ryder carbine-action BB gun. He dreams about it, fantasizes about it and comes up with a variety of ways to make his parents see his need.  His Old Man (Chris Hoch) is victimized by his next-door neighbor’s dogs, as everything he owns falls apart and as he’s left to deal with it, cursing up a storm. All he wants is respect and to be thought of as smart. When he wins a leg lamp in a contest, his wife (Elena Shaddow) is mortified. Her job is to keep the family together and care, which she does in spades. His little brother Randy (Hudson Loverro) can only eat when he is pretending to be a piggy. In Ralphie’s world, his teacher Miss Shields (Danette Holden) has the power to make his dreams succeed or fail. The kids of the town are bullied as they long for Christmas to arrive.

As the narrator, Jean Shepherd (Ted Koch), offers insight into his younger self with ease and wisdom, but Mr. Koch seems miscast. Jake Lucas as Ralphie, is adorable playing every boy and girl with a childhood wish. Chris Hoch as the Old Man, makes this role his own and deserves “A Major Award.”  Elena Shaddow as the mother, has some of the most touching songs in the whole show and brings that thing to life, that every child wants…unconditional love. Danette Holden steals the show with her the tap dancing  “You’ll Shoot Your Eye Out.“ However despite all that Hudson Loverro as Randy has the it factor in spades. I can not wait to see what he does next!

Benj Pasek and Justin Paul, who brought us the impressive Dogfight, have brought a score to the stage that I haven’t stopped singing since I first heard it. This music is infectious, joyous with that old fashioned flair that made me love musicals in the first place. Kudos must go to orchestrator Larry Blank and dance arranger Glen Kelly for the rousing show-stopping numbers that fill A Christmas Story with glee.

Now I have to admit I wasn’t a big fan of the movie, but Joseph Robinette’s book is funny, poignant and loving. Director Brandon Ivie keeps this show on its toes. This show bring me to tears like no other show I’ve seen. This family hears, listens and connects, and so does the show. Choreographer Mara Newberry Greer recreates a lot of the Broadway version with Busby Berkley, Bugsy Malone, tap-dancing, can-can’s and spirit to the stage.

If you do not like this show, it is because you have turned into Scrooge and cannot see that these are the values that made families great and keep them together, something that we have lost in this country. These were the days when  mothers stayed home not because they had to, but because they wanted to. This is an era gone by, or maybe your heart is just two sizes to small.

Be it Christmas, Valentine’s Day or Easter, this is not just a holiday show, but an everyday feel-good show that makes you remember the joys of the season. 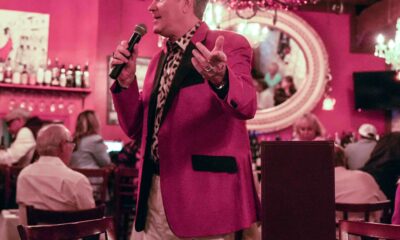