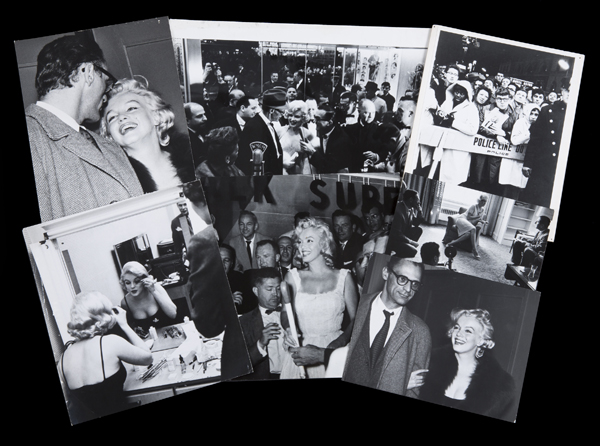 Julien’s Auctions, the world-record breaking auction house, announced today the addition of an exceptional collection of photographs and material from the estate of famed photojournalist, Manfred Kreiner featuring his most famous subject–Marilyn Monroe–to their two day auction extravaganza LEGENDS taking place Thursday, June 13 and Friday, June 14, 2019 at The Standard Oil Building in Beverly Hills and live online at juliensauctions.com.

Born in Speyer-am-Rhine, Germany in 1929, the late photojournalist who worked as the bureau chief in New York for the Bauer Publishing House in Hamburg, Germany, captured some of the most famous and iconic images of Hollywood’s greatest screen legend and sex symbol during some of her career defining appearances as well as her most candid and incandescent moments.

A wide variety of photographs and contact sheets, as well as some of the only known existing, original negatives of Kreiner’s images of Marilyn Monroe, will be offered for the first time at auction, some with copyright usage included. Several lots related to one of her biggest films, Some Like It Hot (UA, 1959), are heading to the auction block including a series of black and white negatives of Monroe with her husband, playwright Arthur Miller, at the 1959 premiere of the film (estimate: $4,000-$6,000); a group of ten black and white contact sheets of images of Marilyn Monroe taken by Kreiner while Monroe was in Chicago promoting the film (estimate: $1,500-$3,000); a group of six black and white photographs of Monroe signed or stamped by Kreiner that capture the pop culture icon being interviewed, photographed and smiling during her press trip to Chicago to promote Some Like It Hot(estimate: $1,000-$2,000) (above center photo); a group of six black and white photographs signed or stamped by Kreiner, three of which capture Monroe looking adoringly at her husband Arthur Miller, being interviewed with Miller and holding his arm at the premiere of Some Like It Hot (estimate: $1,000-$2,000) and an image of Monroe at a Time Life building construction celebration, as well photographs, contact sheets and negatives from other sessions, including candids and original portraits.

Other highlights from this collection include original photographs, contact sheets, slides and negatives (many including copyright) taken by Kreiner in the 1950s-1960s of John F. Kennedy and Jacqueline Kennedy Onassis in Venezuela and New York (photo below), Muhammad Ali, Frank Sinatra, Kirk Douglas, Grace Kelly, Angie Dickinson, Henry Fonda, Sophia Loren, Henry Miller, Charles Manson, Richard Nixon, Ursula Andress, and other celebrities, politicians, luminaries and public figures, as well as the funerals of JKF and RFK, and other events.

The Property from the Estate of Manfred Kreiner joins a marquee lineup of over 700 lots to be auctioned featuring items by Marlon Brando, John Belushi, Steve McQueen, Daniel Craig, Hugh Jackman, Stan Lee, Quentin Tarantino, the Duke and Duchess of Windsor, HRH Princess Diana, Jerry Lewis, Al Pacino, Johnny Depp, Danny DeVito, Laurel Hardy, Buster Keaton, never before seen photographs and negatives from Gone with the Wind (MGM, 1939) and The Wizard of Oz (MGM, 1939), as well as a grand collection of material commemorating the 50th anniversary of the historic Apollo 11 moon landing, Property from the Collection of Slash and Perla Hudson and more.