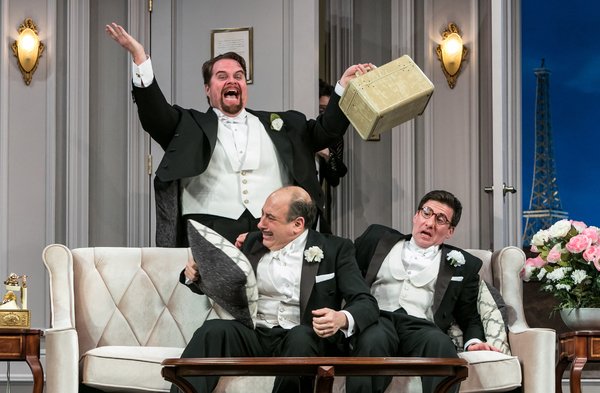 A Comedy of Tenors Not A Good As The Original

A Comedy of Tenors Not A Good As The Original 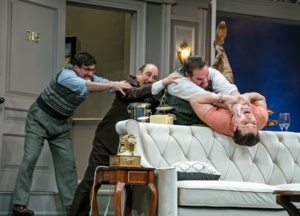 Ken Ludwig’s A Comedy of Tenors, now playing at the Paper Mill Playhouse, has a lovely set design by Michael Schweikrdt, but nether the set nor the costumes by Mariah Hale gave you the feeling, you were in 1930’s Paris, in a ritzy hotel. 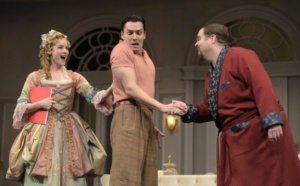 Everything about this show is like a watered down version of its original play Lend Me A Tenor. Not to say that it isn’t amusing, but it lacks that fizz. 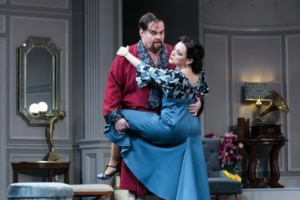 I also like my farce done much more seriously, so that the comedy naturally breaks through, allowing a much more layered play. A prime example of this is The Liar playing at Classic Stage Company, here in New York. Wonderful writing and because the actors don’t ham their way through, it’s hilarious.

The plot and many of the characters will seem familiar, if you know and saw Lend Me A Tenor. Back again is opera star Tito (John Treacy Egan), with his hot blooded wife (Judy Blazer), to participate in a historic operatic concert of three tenors in a stadium. The gig is the brainchild of Henry Saunders (Michael Kostroff), the former mayor of Cleveland, and the impresario who put this gig together. Tito who is ageing, is no longer the singer, women flock to the stage door to see, that has now been taken over by an American named Carlo Nucci (Ryan Silverman), who is Mimi’s (Jill Paice) boyfriend, unbeknownst to Tito. Through a comedy of misunderstandings Tito thinks his wife is having an affaire with the younger singer. When another tenor quits, as luck would have it he is replaced by Carlo, which sends Tito into a rage. By the end of Act One, divorce is being shouted and the two tenors quit leaving Max (David Josefsberg) the third tenor and Henry’s son-in- law on their own.

Act Two, has Henry suicidal, until the bellhop Beppo (John Treacy Egan), a dead ringer for Tito appears. Mistaken identities, a sultry ex-lover of Tito’s, opera singer Tatiana Racon (Donna English), who wants to continue what once was, his wife who wants to reconcile, pregnancies, birth and of course a concert end the show.

The main prop is a rather large tongue on a plate that is used in a mired of repulsive and vile ways. It is just one of several  lowbrow attempts at mirth. There are moments of delight, but they are too few and take too long to get to.

Kostroff and Josefsberg just seem as if they are repeating their roles in The Producers. Blazer, English and Paice all are well matched. Silverman, though talented just doesn’t seem like that 30’s male heartthrob. It is amazing how John Treacy Egan does what he does. He’s like an energizer bunny, switching roles and going from side to side. The men all sing well together and that is a highlight of the show.

Directed by Don Stephenson, the show just seems miscast, even though Stephenson and his cast are reuniting after doing Lend Me A Tenor five years ago. Sometimes it’s hard to go back and capture that magic. Stephenson, does have an arsenal of prat falls, swan dives and tricks up his sleeve. I especially loved the curtain call mega mix. Clever!

I am not a sports fan and only knew who was playing because one of our writers was covering the Super Bowl and since politics has my head spinning, it was nice to be entertained and laugh. I just wish there were more moments in which to do so.