A Day in Hollywood, A Night in the Ukraine Split Personalities 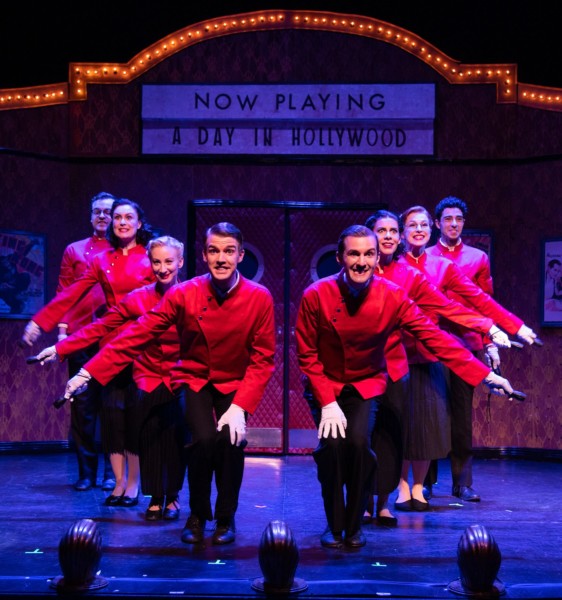 A Day in Hollywood, A Night in the Ukraine Split Personalities

Robert Massimi
A Day in Hollywood, A Night in the Ukraine played back on Broadway in 1980. The musical was nominated for 9 Tony Awards in which the show won two and played over 500 performances before bowing. The show is unique as it presents essentially two independent one act musicals. The first act is a revue of classic Hollywood songs in the 1930’s set in Graumanns Chinese Theater. The second act is based on Anton Chekov’s one act play, The Bear, as if done by the Marx Brothers in a film. 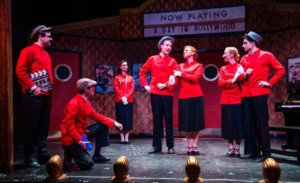 The company of J2 Spotlight Musical Theater Company’s revival of “A Day in Hollywood / A Night in the Ukraine” at Theatre Row photo by Russ Rowland.

The show’s book and lyrics are by Dick Vosburgh and the music was written by Frank Lazarus with additional music and lyrics by Jerry Herman, Richard A. Whiting and Johnny Mercer to name a few. 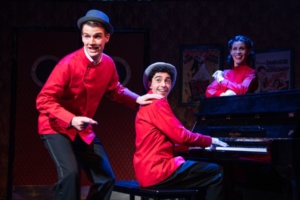 At Theater Two on Theater Row, J2 Spotlight under the Artistic Direction of Robert W. Schneider put forth a wonderful, heartfelt production of this current revival. The show is humorous, upbeat and well choreographed by Diedre Goodwin. In the show’s first two numbers “Just Go to the Movies and “Famous Feet”, the audience is treated to a frenetic opening number followed by a wonderful tap number under deft direction by Schneider. All eight characters make easy use of a small stage. The first act works best when all the characters are in the numbers. Songs like “Where Else but on the Silver Screen, the “Richard Whiting Medley” and “Doin’ the Production Code” are better than most of the individual numbers. “Nelson”, “A Day in Hollywood” and “Best in the World” don’t work as well. Fortunately, we get enough of the full cast to make this act a winner. 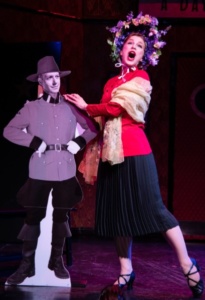 The opulent set design (the theater lobby) is well appointed by Joshua Warner and so are the costumes by Matthew Solomon. 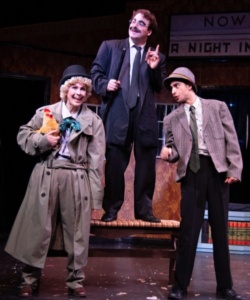 The second act runs on higher octane than  Chekov, who was a great comedic writer. The show gives his writing an amped up version when played by to the Marx Brothers. David B. Friedman  is witty and quick in this act playing the Groucho Marx character Samovar, a lawyer. Suzanne Slade is a fantastic Gino as is Lauren Lukacek as Pavlenko.

In this zany farce, Samovar needs to collect money owed to him by Pavlenko’s husband who has recently died. Samovar is as crude as he is insulting when he is forbidden to see her and that is when the fun begins. In this act, the direction is on the mark in how the characters banter about.
The romantic lighting by Ethan Steimel and Burkett Horrigan work well in both acts, bringing the warmness toward the audience. This sets the pace for easy watching as well as listening… almost like having the effect that you were watching the action from your living room.
J2 Spotlight has a knack for putting on warm, feel-good musicals. Up next is The Bakers Wife.
Today was the  last performance and it had a real Broadway quality to it.
Related ItemsA Day In Hollywood / A Night In The UkraineDavid B. FriedmanGraumanns Chinese TheaterJ2 SpotlightLauren LukacekMarx BrothersNewRobert MassimiRobert W. SchneiderSuzanne Slade
Off Broadway

Suzanna BowlingJanuary 18, 2023
Read More
Scroll for more
Tap
The Long and Intensely Satisfying Prayer for the French Republic
Off Broadway News: The Pipeline Festival, Meet and Greet Penelope or How the Odyssey Was Really Written, Red Bull Theater, Vineyard Theatre  and The RattleStick Theatre Gala