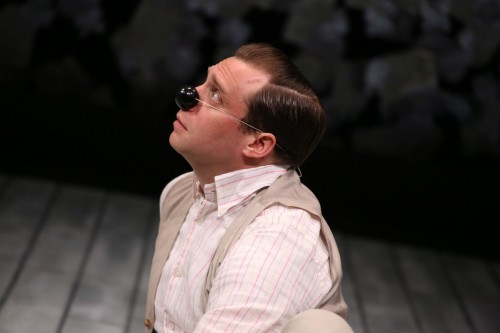 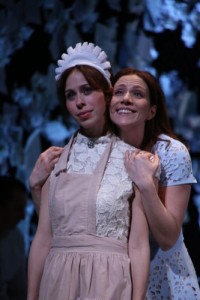 Zachary Fine, with a goofy puppy dog look and a shiny black ball over his nose, says more with a look in the Fiasco’s newest production Two Gentlemen of Verona at Polonsky Shakespeare Center. The puppy’s name is Crab and his owner Launce (Andy Grotelueschen), bring the doggie scenes to an uproarious laugh and almost steals the show. Launce also wins the audience over with his list of the pros and cons of his girlfriend. These are just a minor moments in this wonderful production by the extremely talented acting troupe. The award-winning Fiasco Theater troupe, was formed by graduates of Brown University/Trinity Rep’s M.F.A. acting program. Where this show has players playing multiple roles, Grotelueschen also plays Proteus’ father and Sylvia’s father, the Duke. The ensemble’s enchanting production is highlighted with a magical creative set by Broadway’s Derek McLane.

Two Gentlemen of Verona deals with the themes of friendship and infidelity, the conflict between friendship and love, and the foolish behaviour of people in love. For those who don’t know the show Valentine (again the wonderful Fine), is preparing to leave Verona for Milan to broaden his horizons. He begs his best friend, Proteus (Noah Brody), to come with him, but Proteus is in love with Julia (Jessie Austrian) and refuses to leave. Proteus’ father decides that Proteus should travel to Milan and join Valentine. He orders Proteus to leave. Proteus swears eternal love to Julia and the two exchange rings. In Milan, Valentine has fallen in love with the Duke’s daughter, Silvia (Emily Young, who also plays Lucetta, a waiting-woman to Julia). Proteus falls instantly in love with Silvia and vows to win her. He double-crosses Valentine and stalks Sylvia despite her sprung his affections and declaring her love for Valentine.

One of the things Fiasco does so well, is they make the characters relatable. Paul L. Coffey entertains as a rich rival for Sylvia’s hand, an addle-brained servant and a cross-dressing traveler. Noah Brody, is reminiscent of a young Jim Carrey. Fiasco Theater’s rendition of Two Gents is a show that should be traveling through out high schools and even elementary schools allowing audiences to see how easy it is to get Shakespeare and how much fun the bard can be.