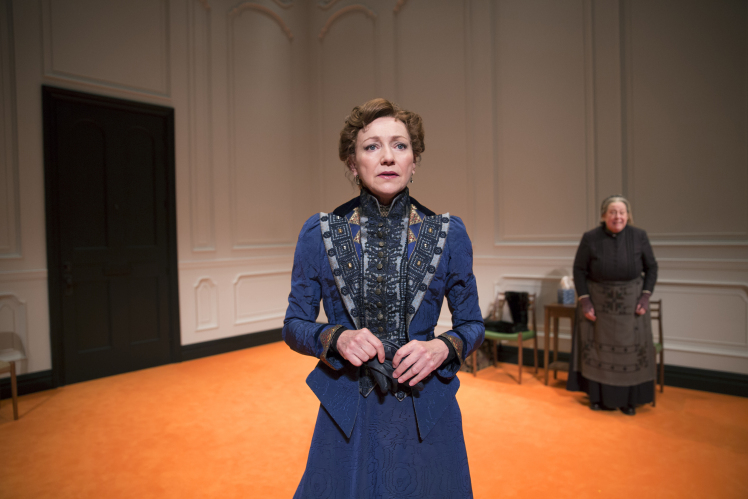 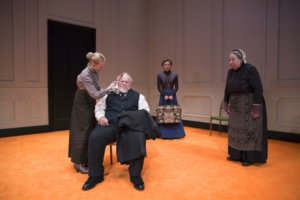 The last time I saw Nora, was a few months ago, when I went to see this production starring Laurie Metcalf (The Other Place) shake this theatre apart with her stunning and powerful portrayal of Nora, earning her the Tony Award.  The Doll’s House, Part 2, the astounding new play by Lucas Hnath, an exciting new playwright (The Christians, Red Speedo) has lasted through the summer but sadly has posted a closing notice. I’m truly sad that this show will be shutting its doors.  I would guess that the loss of the star power of Laurie Metcalf and Chris Cooper has done this play in, but make no mistake, their replacements, Julie White and Stephen McKinley Henderson are equally as astounding in their respective parts, with Henderson creating a much stronger and defined Torvald than Cooper ever did.

In Ibsen’s 1879 masterwork play, Nora walks out the door, leaving behind her shocked husband and unknowing children behind. Her action is seen as a brave and monumental decision for a woman to make, especially back in the day when it was written. That classic was a powerful raising of the fist for feminism and a woman finding her place in the world. Nora didn’t want to be Torvald’s pretty little doll. She didn’t want to be played with by a man who looks down from a high. In this clever sequel to that ground-breaking Ibsen play, it all starts with some impatient knocking. When that door is finally opened, by the incredible Tony Award nominee, Jayne Houdyshell (The Humans, Follies) as Aunt Marie, Julie White (Tony Award winner for the incredible The Little Dog Laughed) is standing there, strong and well dressed.  A new and equally magnificent Nora has come home again. White as Nora stands there erect and proud, but nervous and in need, and we know we are in for a wild ride courtesy of this modern young playwright and his new delicious star.

Hnath getting his Broadway debut writes A Doll’s House, Part 2 with a very modern slant on language and demeanor, while following the story line plots from the original with precision. This is a ‘what if’ story line, that examines the inequalities and social arrangements of the past with a nod to responsibility, love, attachment, and a diatribe on marriage. It’s a powerful four person production, directed by the big named Broadway director, Sam Gold (The Glass Menagerie, Fun Home) creating with this new crew of actors an equal and just as powerful (maybe even more so) production then the one I saw a week before the 2017 Tony deadline.  Gold doesn’t hold back on the punches, giving his cast numerous opportunity to use this play to score big on many different levels, while also being funny and thoroughly engaging.

Houdyshell (The Humans, Follies) playing Aunt Marie, the woman who stepped in when Nora left to help Torvald with the home and the children, ushers the former lady of the house into the bare living room.  It’s a bit shocking to Nora that the room is so empty and void of all frills (a thrilling set design by Miriam Buether; lighting by Jennifer Tipton; sound by Leon Rothenberg).  Marie was expecting Nora, and finds herself in quite the conflicted situation. She has a lot to say to Nora, and the flood gates open wide for the both of them. These two, just as it was with Metcalf, give us a master class in arguing, playing off each other in a well-written dance about motherhood, marriage, and so much more.

Without a doubt, White is as incredible as Metcalf was. She equals the previous performance so well that comparisons don’t take place in our thoughts or mind until much later, as we watch her inhabit the part with a strong stance that is both modern and old fashioned all at the same time. Once again she is impeccably dressed by costume designer, David Zinn (Present Laughter, The Humans) giving her a command that radiates beyond the stitching.  She delivers every line with a strength and solidness of the woman she has finally become. She’s funny and sure footed, while also struggling with insecurity and shame, especially when the conversation circles around to her children.  Erin Wilhelmi (Ivo van Hove’s revival of The Crucible) as the daughter, Emmy, one of three that Nora abandoned so many years ago, is equal to the solid portrayal by the previous Emmy, Condola Rashad (MTC’s Ruined). She matches the strength and conviction of White’s Nora, while playing and engaging in sublimely unique and fascinating rhythms that surprise.  It’s steadfast and true, while challenging the woman that is her mother, but not her caregiver. There is a simple lovely innocence in Wilhelmi’s Emmy that Rashad didn’t radiate, but it just makes the connection to one another different, not better or worse.