This is the kind of wonderful excitement we need in the world today.

From the mind of Israeli playwright Eden Atias comes an innovative and immersive musical the audience will be talking about long  after the final curtain call.

The fantastic kingdom of Pintiyoga is a colorful land of flowering forests, lush valleys, and rolling mountains. Between this land and the dwelling place of humans stands an amusement park called Dell’arte.

Dell’arte park is a magical realm where halflings from the kingdom of Pentioga and humans can work and play side by side daily. This special place is managed by a butterclown named Erliko. When Mr. Fire steals Erliko’s Eyosha wings, he takes control of the park. All the bright colors dim as he charges admission to the creatures. The once delicious foods turn bland, and the once exciting rides grow dull. Somehow, the audience will have to find a way to revive the park’s fading color, innocence, and joy.

Theatergoers can expect fun, fantasy, and fresh perspectives from this musical, but they should not expect to sit back and relax. On entering an amusement-park-themed theater, they are instantly transported to a whole new world and transformed into integral participants in the play.

“You and your children are about to enter an immersive show that has yet to begin and will never end,” states Atias. “The play requires everyone to be part of the experience. Action happens all around the theater and gives everyone the chance to join the play.”

Playwright Atias was born in Israel and has been involved in acting since the age of five. At 14 years old, she discovered her love of clowning by performing at children’s birthday parties. The young producer recently transferred to New York. Though her career is rooted in Israeli TV and theater, she now writes, directs, and coordinates performances in both Israel and the United States. 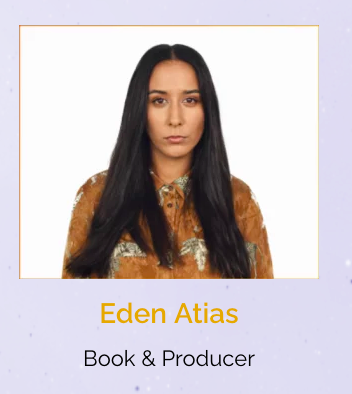 In revisiting commedia dell’arte, Atias hopes to bring this traditional art form to an entirely new audience. “We are excited to invite you to our very first show here in New York,” she says. “Part of our goal with this beautiful project is to bring elements of past culture into our current lifetime. You will be immersed in the world of the classic art form of commedia dell’arte, complete with masks and the clown humor of yesteryear. It is the first time a musical of this magnitude has appeared in this style.”

Abrons Series presents The Magical Journey of Arlekina by E A Productions at the Abrons Arts Center. The musical opens on June 28th at 7:00 PM with a red-carpet entrance, press-party interviews, and a meet & greet. Other showings include:June 29th at 6:30 pm; June 30th at 4:00 pm and June 30th at 7:00 pm.  Tickets are on sale for $30, which makes for a wonderful day for the whole family all while supporting local theater. It is the kind of amazing thing you can only find in a great town like New York City.