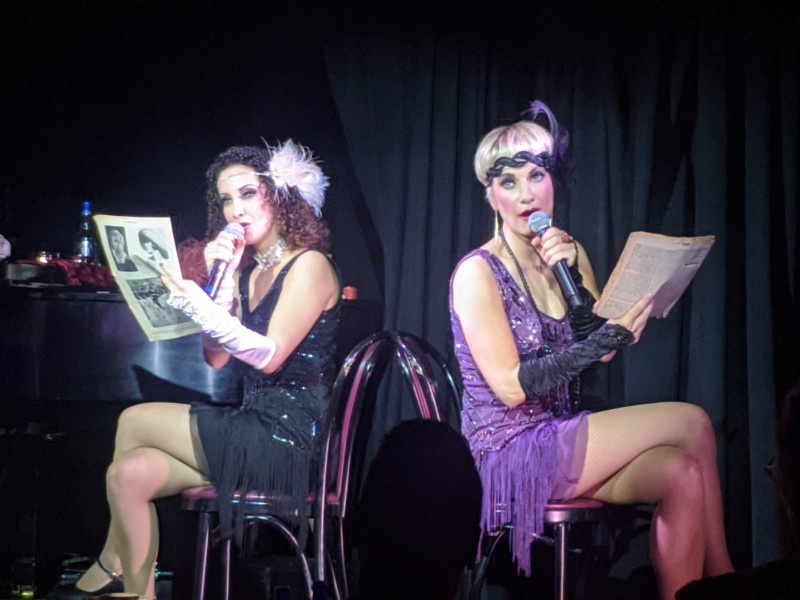 Currently in the heart of Broadway there are a number of shows that they say have been written to empower women, to discuss homosexuality and other sexual preferences and a third that takes a historical look at a nation divided. But uptown on 72nd Street just off Broadway in a small cabaret venue one show covers all three of these topics with passion, class and not one of those four-letter words that have become too prevalent in our current Broadway season. Margo & Juliette (A Dance on the Volcano in Weimar Berlin) at The Triad stars writer, director and choreographer of the show Adrienne Haan and co choreographer, Magali Dahan. 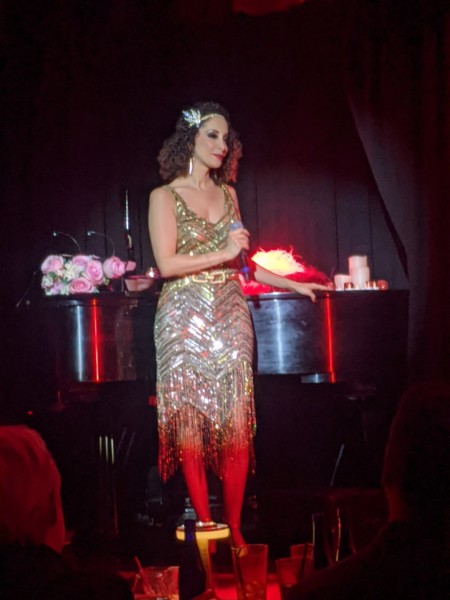 When you first sit down at your table at the Triad you realize you are not there for a traditional style cabaret show with 75 minutes of songs and banter; you a greeted with a program listing over 20 songs with an intermission – this will be a real show so sit back and enjoy. These songs are written over 100 years ago but are still fresh and new today sung by these two actress/singers. They tell a story of post World War 1 Germany, suffering from inflation so high deutschmarks are carried in wheelbarrows to pay for weekly groceries ($6 gas doesn’t sound so bad). It was a time when social mores and views on sex were becoming more liberal and the songs of the time showed that, with titles such as Naughty Lola, Blonde Women and I Am a Vamp – some of these sung by the duo as seductive ballads; others as witty dance tunes. 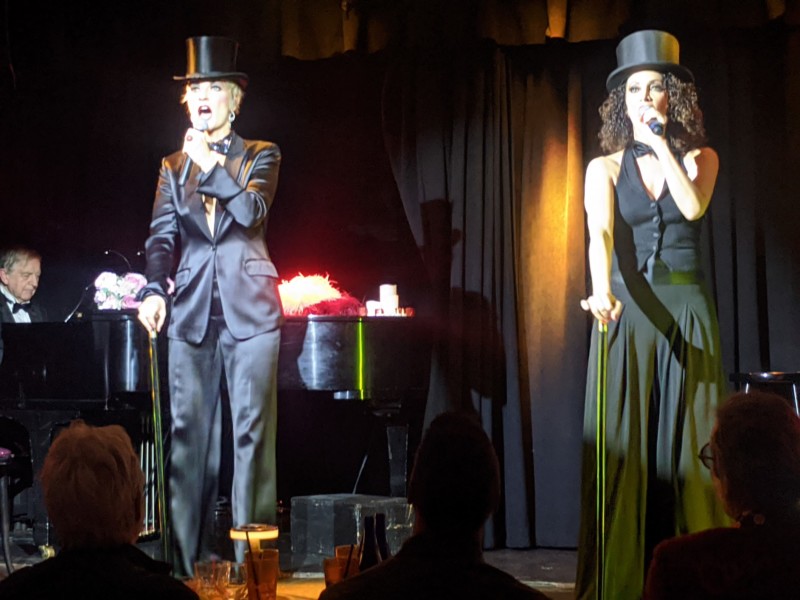 I won’t go into song by song I will just whet your appetite with what to expect. Each of the singers, Ms Haan and Dahan are given solos which truly show off their vocal ranges. They also have some numbers where their comic timing is revealed when they alternate verses, complimenting each other’s voices while telling an entertaining story. Additionally, they give us some wonderful harmonies throughout the evening so that each song is a surprise in its delivery and arrangement. 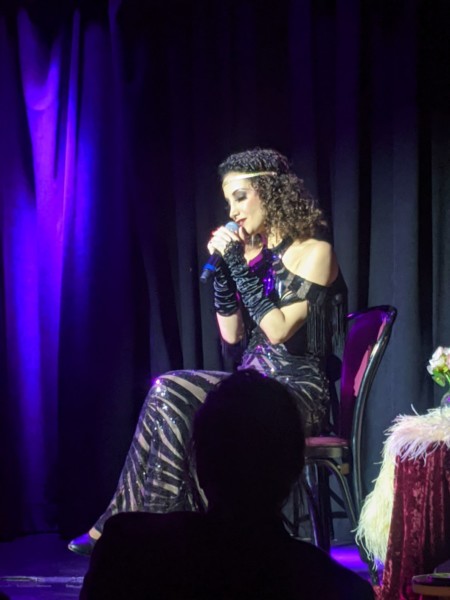 The two women, Adrienne Haan and Magali Dahan are true performers with voices and personality that can bring an audience to laughter or tears by the delivery of their songs. In addition, I must give raves to their musical director and pianist, Richard Danley who not only keeps up with the duo but also directs them nonstop through the two dozen songs. 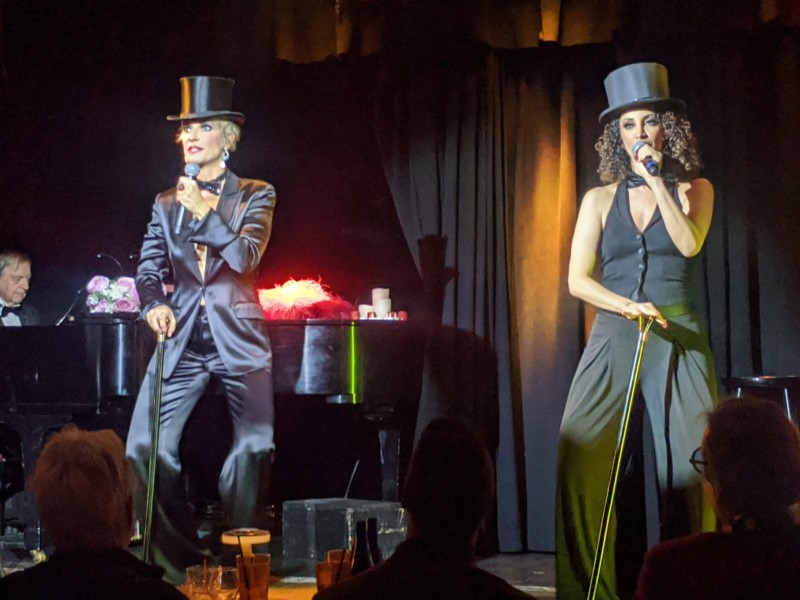 As I said this is not just a cabaret; it is a show with all the aspects of A SHOW: a storyline, costume changes (7 different wardrobes between the two, ranging from seductress in fishnet stockings to equally alluring tailored tuxedoes); choreography – jaunty kicks to elegant waltz; lighting and definitely acting. I first saw Ms. Haan in her one woman show at the Triad a month ago and I remarked on her expressive face. Big eyed surprised look, cross eyed confused; open mouthed shock or pursed lips annoyance and a comical new one this show that reminded me of one of Lucy Riccardo’s rubber faced Ewwws. Both women control the stage and they use every bit of it; sitting on the piano, chairs, floor; leaning on the walls and coming into the audience to have fun with their guests. The show is supposedly set in a nightclub called Chaos Cabaret; but the 2 hours spent there are so polished that the name sounds ironic. 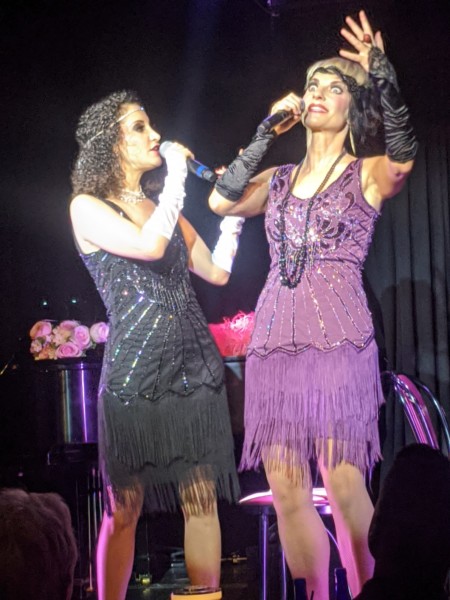 This show is entertaining; but, as I said, addresses specific meaningful topics that were relevant in the 1920-30 era of Germany and are still discussed in today’s United States: women’s rights on equality and abortion; sexual preferences; discrimination based on religion or race. The show is not written to preach as some Broadway shows have recently been revived and revised; but, you do get some things to think about after leaving the Triad. 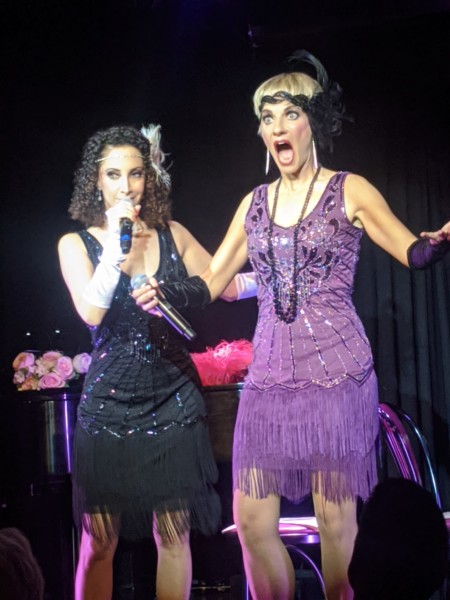 One of my favorite moments of the evening was when the two women embraced in a very passionate kiss; a voice from the audience exclaimed, “Oh no!” which was quickly followed by another audience voice encouraging, “More, more!” It shows that there are many opinions of life today and Margo and Juliette accept them all. 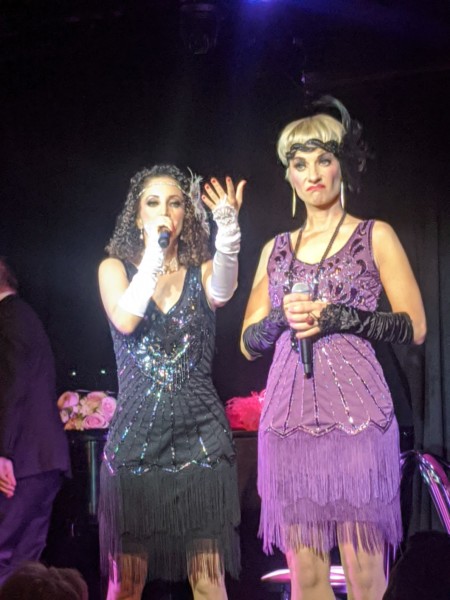