The late singer Dolores Mary Eileen O’Riordan was the kind of rock ’n roll babe that we all were inspired by: one who was sensitive and yet powerful, compelling and compassionate, sexy but not frail. In her song “Zombie,” her performance embodied so much of the virtues that made her group the Cranberries the stars that they became. 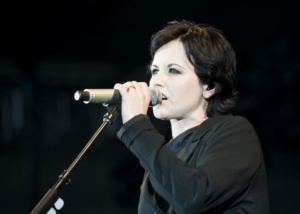 Yet on Monday, January 15th, 2018, the Ballybricken, County Limerick, Ireland-born singer was found dead on the bathroom floor in her Mayfair, London, Park Lane Hotel room the day before she was about the record a new version of her signature song with the hard rock group Bad Wolves. At one time, the 46-year-old was proclaimed one of the richest individuals in Ireland.

The Irish singer-songwriter led her rock band the Cranberries for 13 years before it took a break in 2003 and reunited in 2009. Throughout their career The Cranberries sold over 40 millions records worldwide and for years they toured furiously as their star rose as the other Irish rock bad known as a global phenomenon.

Their other hits included “Linger” and “Dreams” among others.

She launched a solo career with the album, “Are You Listening?” — released in May 2007 — which was followed up by “No Baggage” in 2009. In April 2014, she teamed up with Smiths bassist Andy Rourke and Ole Koretsky to provide the vocals for the trio D.A.R.K.

Known as a lilting mezzo-soprano, O’Riordan could yodel her way above a furious pulsing sound and the guitars’ churn. With her strong Limerick accent, O’Riordan’s work could be incredibly celebratory but it also had a melancholic tinge that presaged her untimely death. She has admitted to bouts of depression and had questions about her own survival and mortality — even wondering in one interview whether she’d make it to 50.

Born September 6th, 1971, she grew up with the Irish Troubles. And in that her hit tune “Zombie” addressed terrorism head on, it was so inherently Irish with powerful lyrics that tell of a child killed in a bombing.  As quoted in Rolling Stone, the President of Ireland Michael Higgins said in a statement, “It is with great sadness that I have learned of the death of Dolores O’Riordan, musician, singer and song writer. Dolores O’Riordan and The Cranberries had an immense influence on rock and pop music in Ireland and internationally. I recall with fondness the late Limerick TD Jim Kemmy’s introduction of her and The Cranberries to me, and the pride he and so many others took in their successes. To all those who follow and support Irish music, Irish musicians and the performing arts her death will be a big loss.”