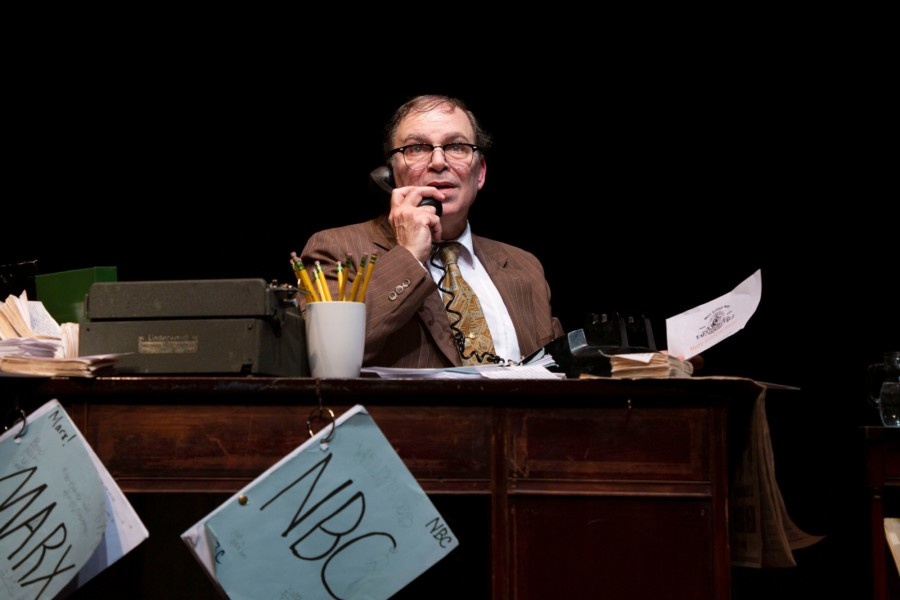 ‘What’s a Jewish mother say to her kids when she finds out there’s gonna be a horrible flood, the whole world’s gonna be covered, gonna destroy the whole earth? ‘So, you’ll learn to breathe underwater!’

The government has always kept tabs on us. During the McCarthy era, hundreds of Americans were accused of being Communists or Communist sympathizers simply by the clubs they joined as kids. Many of the people whom McCarthy suspected of having communist ties were the Hollywood elite, including actors, screenwriters, directors and producers. Many in the entertainment industry were blacklisted and were refused employment based on their political ties. They tried to fight back, but were were sentenced to prison for contempt of Congress and lost their livelihood.

Tonight A Jewish Joke, opened on Theatre Row and tackles this blight on humanity. Written by its star Phil Johnson and Marni Freedman this one-man show about fictional Bernie Lutz, a Jewish screenwriter, seems to follow what is happening in America today. Lutz, seems to be based on Abraham Polonsky, an Academy Award-nominated screenwriter who was blacklisted by Hollywood for refusing to testify before the House Un-American Activities Committee.

Back in the late 40’s, early50’s money was God and ethics fell by the wayside. Friends turned against friends and sold them out. Lutz is forced to choose between defending his friend and writing partner or saving his career that is finally on the rise. In attempts to keep the FBI and the wolves at bay, he tells jokes. The F.B.I. keeps pressuring him to name names especially his partner and best friend.

The entire action takes place on the eve of their red-carpet premiere of their newest screenplay The Big Casbah. As phone call after phone call comes in, Bernie discovers he is targeted. It doesn’t help that he tore up the government letter that wanted him to testify before the committee.

His entire life flashes before his eyes, as he tries to ask Louis B. Mayer to intercede, but the mogul will not take his calls. His dad’s union-organizing days come into play as Bernie tries to do the right thing.

A Jewish Joke was an award-winning show that started at the United Solo Festival in 2017. From there… San Diego and tours that landed them in Chicago, St. Louis, Louisville and New Haven.

Director David Ellenstein keeps the show moving, but this is Mr. Johnson’s piece. He embodies those men who were up against the wall and used a much humor as they could to survive this hellish attack on humanity based not on facts, but trumped up lies and fear.