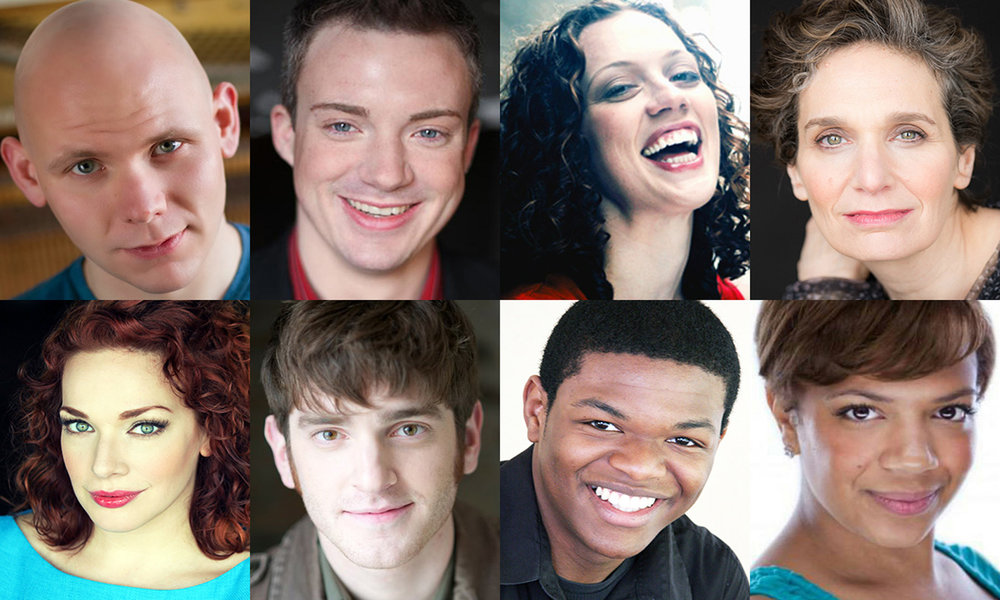 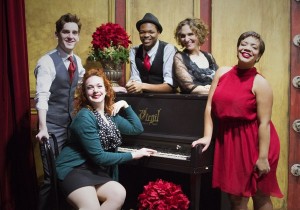 A delightful blend of contemporary Christmas songs and classic holiday melodies, Kokandy Productions is dipping their toe, err, stocking into the holiday entertainment market with their first ever holiday revue, A Kokandy Christmas. An ambitionstreat featuring the singing voices of a quintet of rising Windy City talent; Emily Grayson, Christina Hall, Garrett Lutz, Sasha Smith and Jaymes Osbourne. Although it must be noted, Jaymes Osborurne was out the night I attended, his vocals replaced by musical director Aaron Benham. Created and directed by Michael Potsic with Allison Hendrix, this holiday cabaret featured new arrangements of seasonal favorites, crafted by musical director Aaron Benham and Michael Potsic. A delightful composite of personal stories, powerful vocals, a gorgeous classics, A Kokandy Christmas was the most delightful blend since the Starbucks Peppermint White Chocolate Mocha Frappuccino. 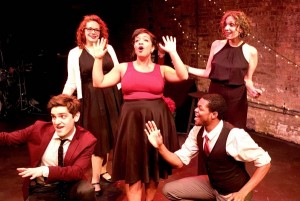 The 80 minute cabaret began with the energetic cast singing about their love for the holiday and promising “we are laying the Christmas smack down.”The first soloist of the evening, Sasha Smith, recollected her favorite childhood memory, receiving both the Spotlight Barbie complete with form fitted, shimmering black gown and matching cocktail gloves and NSYNC’s holiday cd, featuring “the love of my life” Lance Bass. It didn’t work out” she jested as Mr. Bass is now out and proud, married to a man. After the audience’s giggles subsided, she entertained with a lovely, silky smooth version of It’s Beginning to Look A Lot Like Christmas. Christina Hall was up next recalling her 90* Houston, Texas childhood holidays. Her chosen memory to share, when her family bought a real tree and had it  “flocked” for all to see.  Flocking a tree is having it sprayed to look as though snow had just fallen on each branch. The neighborhood regaled the Hall family spruce. Christina electrified with a mash-up of Lee Greenwood’s Tender Tennessee Christmas  & Irving Berlin’s I’m Dreaming of A White Christmas. Emily Grayson brought the laughs, both intentional and unintentional. Describing herself as “ the Jewish girl in a Christmas show” Grayson detailed her wedding proposal gone horribly wrong. Down “on one knee, the man of my grandmother’s dreams.”Shortly after the comedy of errors engagement story, her mic pack fell down her back, into her pants and landed down by her knees. Ever the pro, she wasn’t diverted but a moment while performing an exquisite rendition of Joni Mitchell’s The River. Rounding out the ensemble, Garrett Lutz told his beloved family tradition,  watching the Christmas classics Santa Claus is Coming to Town, Charlie Brown Christmas and Rudolph the Red Nosed Reindeer with his sister and parents. As a performer, he recalled the year he was featured in a show and unable to return home for the holidays. The pratfalls of the life of the working actor. It is here he embraced the learned lesson of the value and importance of chosen family. Charlie Brown should be so prolific. He rounded out his set with a fetching version of Have Yourself a Merry Little Christmas, perched on a stool, strumming the ukulele. 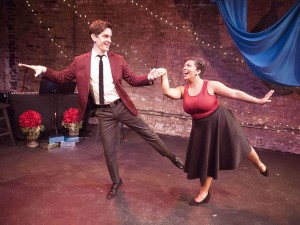 The band was also allowed to share in the festivities. Percussionist Scott Simon was stunned that, at 33, he had never been asked to perform a solo of The Little Drummer Boy.  With tongue firmly planted in cheek, he was given the opportunity to live out his rock star drummer fantasy with a dramatic solo to make Tommy Lee jealous. A man of few words, Bass player Ben Dillinger simply announced he just “wants to play more music for Christmas.”Pianist Aaron Benham, the musical director, proclaimed“I am the fingers of the show.”He joked about being forced into piano lessons as a child so his mother would have an accompanist for her voluntary church holiday programs. His divine mash up of Peace, Peace and Silent Night would have made his mother extremely proud. Rejoined by the entire cast in song, the moment culminated in a charming audience sing-a-long.   On top of soaring solos, the show was also peppered with duets and group numbers. Highlights included Christina Hall and birthday girl Emily Grayson in an explosive, ever increasing tempo mash-up of Jingle Bells and Sleigh Ride, a doo-wop mix of Paul McCartney’s (Simply having a) Wonderful Christmastime, and a jazz influenced,  deconstructed duet of Mariah Carey’s All I Want for Christmas is You by Garrett Lutz and Sasha Smith. The ending of the show, coming full circle, the entire company committed to NSYNC’s 1998 holiday dance-pop contemporary classic Merry Christmas, Happy Holidays. 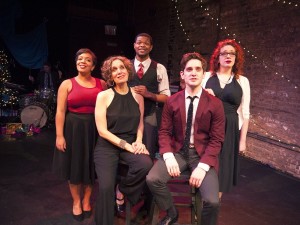 The set by John Buranosky was simple, two decorated trees with background twinkle lights and curtains to set the mood and not to overpower any of the performances.   Michael J. Patrick’s lighting design works well for this Christmastime cabaret too. The addition of a choreographer to next years’ rendition (I am being anticipative) would tighten up very loose marks and unpolished dance steps, my only real complaint of the evening. Adorable, amusing, and bright, I trust this Kokandy Production will become an annual tradition to the lexicon of Windy City holiday showcases. As delicious as egg nog and freshly made gingerbread cookies, but without those pesky calories, the musical “ornaments” on display here will light up the Christmas tree of any soul. Holiday Grinch’s will be left with nothing but giggles and grins on their faces. I cannot think of a more delightful way to greet the season. A harmless night full of nostalgia and yuletide fun, A Kokandy Christmas fits the bill perfectly. 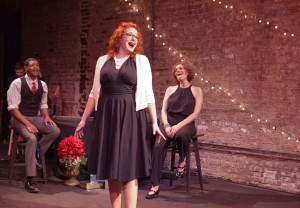 Kokandy Productions A Kokandy Christmas is now playing through December 23, 2015.