A Letter to Harvey Milk Is a Long Time Coming, But Worth The Wait 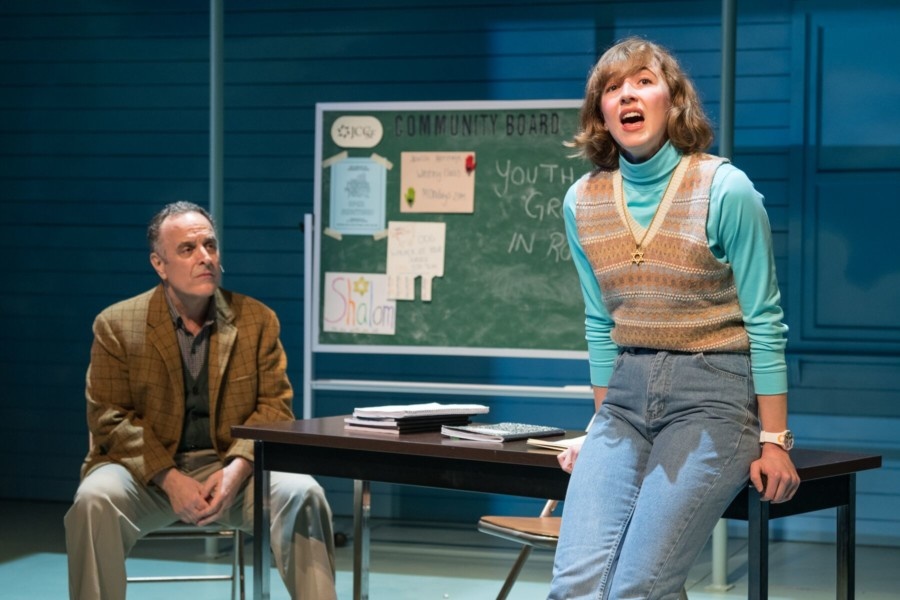 A Letter to Harvey Milk Is a Long Time Coming, But Worth The Wait

This wasn’t at all what I expected when I arrived at the Acorn Theatre at Theatre Row. I’m not sure what I expected to be honest, but a musical about an older straight gentleman dealing with a submerged past brought up from the depths by a writing assignment was definitely not it.  But with a book by Ellen M. Schartz, Cheryl Stern, Laura I. Kramer and Jerry James, based on a short story of the same name by Lesléa Newman, A Letter to Harvey Milk turns out to be a charming sweet musical that does manage to splice a lot of power and punch out of a sometimes silly setup and structure.  The music by Kramer is lovely, while the lyrics by Schwartz and Stern sometimes border on the simplistic or stereotypical, the story in the end is emotionally worthy of its telling.

Harry, an older retired kosher butcher and widower, played with charm and sincerity by Adam Heller (Broadway’s It Shoulda Been You) wakes up one day from a nightmare, and discovers he must confess some ‘sins’ to his dead wife, Frannie, played with a tremendous balance of jewish exaggerations and an engaging warmth by Cheryl Stern (Broadway’s La Cage aux Folles). And up she pops, in the most beautiful and fun way, giving up all the Yiddish chutzpah you could ever hope for from an older Jewish woman and wife. Harry feels he needs to tell Fannie a few things about his life that sit heavy on his heart, with the first confessional being that his simple life is been disrupted by a writing class which is pushing him to “remember too much”, all very well explained in a pretty and thoughtful song, “Thanks To Her“. The class, you see, is taught by a young female writer named Barbara, played with an earnest sweetness by Julia Knitel (Broadway’s Beautiful). All things change when he is pushed by his teacher to craft a letter to someone from his past who’s dead, and instead of writing about his late wife, Frannie, much to her ghost’s surprise, he writes a compassionate and emotional letter to the first openly gay political leader in California, the late Harvey Milk (Michael Bartoli) who had been assassinated eight years prior.

The letter resonates with a power that surprises Barbara, and spurns a confession or two from her as well.  Milk, you see, is one of her heroes, and as orchestrated under the watchful eye of director Evan Pappas (What Will People Think?) and musical director Jeffrey Lodin (Liberty: A Monumental Musical), Harry’s connection to that powerful figure in Gay History unleashes a bond between the two that becomes the cornerstone to this engaging new musical and the weight in its words. Inspired by Milk and the struggles and triumphs to those of the gay community, Barbara shares her experiences of love with Harry in a moment of trust and connection in the beautiful duet, “Love is A Woman” sung with passion and grace by Kniter and Aury Krebs (Regeneration’s As Is) as the lover who leaves. It’s arresting, graceful, and vulnerable, sharing with Harry her pain only to find herself being jolted once again by unexpected judgement by a man that at one time called Harvey Milk a good friend. Milk’s presence and murder, not surprisingly, hangs on the outskirts, framing the story with dread and concern, but we also see that there is something else, an unsaid story that needs to be told and heard by all.  The shadow makes himself seen, standing on the sidelines, haunting Harry with his stare, but the connection to the two figures is kept a secret, at least until the moment Harry is ready to tell.

All the actors’ voices, especially in the beautiful  “Write What You See” sung by Knitel, Heller, and Stern, “Frannie’s Hands” performed lovingly by Heller and Stern, and “Since Then”  gorgeously sung by Knitel, feel like they belong attached to the the songs, perfectly melting into the lyrics and each other emotionally and vocally.  They all have great chemistry and tell their stories with compassion and sensitivity. There are only a few moments that feel too light-hearted for my taste, filled with humoristic Jewish colloquialisms, such as “Turning the Tables” (waiters: Bartoli, Jeremy Greenbaum, CJ Pawlikowski, but sadly, not my friend, the male swing, Ravi Roth) and “What a Shanda” (Stern’s Frannie), keeping us at arms length from the core, and although they are both quite funny, especially Frannie’s number, the main issues that haunt seem to be set aside at those moments for the sake of just pure and simple entertainment.  For some, that might not be a negative, as my companion that night at the theatre was teary-eyed for the majority of the musical, and he was probably grateful for these moments of joy and mirth, but I was less in that place of need, and maybe a bit more impatient to get to the kosher meat of this story.

Harry’s letter does ignite an exportation within, challenging issues of friendship and grief, trust and loss, self-acceptance and fear, that evokes one very big life-changing revelation from Harry that no one, including myself, could have foreseen when walking in. At times, the big conflict between Barbara and Harry feels dated, artificial, and overly dramatic but this is San Francisco, 1986, years before acceptance and visibility of the LGBTQ community was so actively embraced, even in that liberal wonderland. And when the shift in temperature comes late in this one-act musical, ignited by a pink triangle, set designer David L. Arsenault (CSC’s Peer Gynt), lighting designer Christopher Akerlind (Broadway’s Indecent), costume designer Debbi Hobson (Anne Frank in the Gaza Strip), and sound designer David M. Lawson (Urban Stage’s Angry Young Man) smack us to attention with a miraculous alteration that comes out of nowhere like a slap.  It’s a shock to the system, and gives this musical about A Letter to Harvey Milk the power and the punch that it needs and deserves. Barbara’s “A Letter To Harvey Milk” pulls the heart of this simple story, that took so many years in the making, all together. This is a letter worth reading and seeing, and well worth the wait.