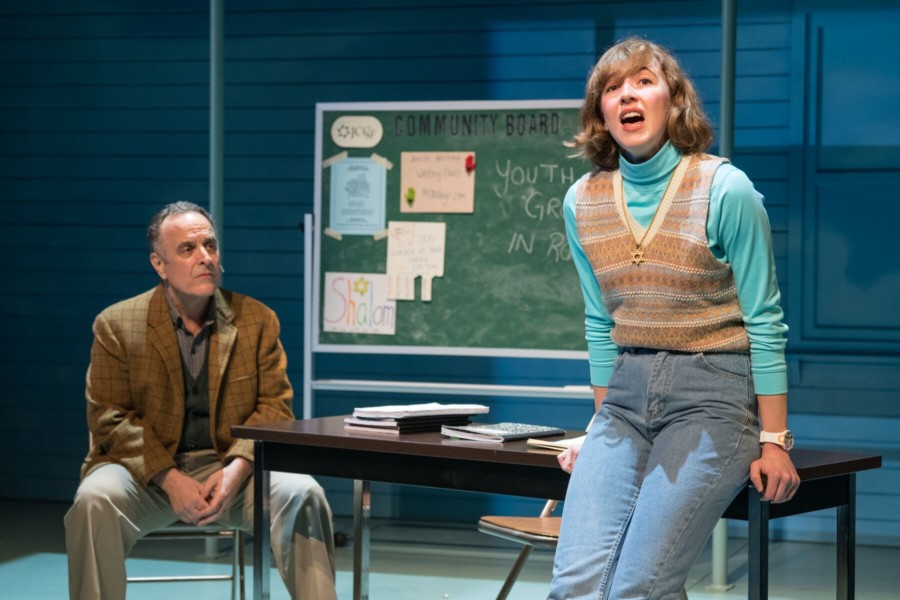 A Letter to Harvey Milk: The Musical – Signed, Sealed, But Undeliverable

A Letter to Harvey Milk: The Musical – Signed, Sealed, But Undeliverable 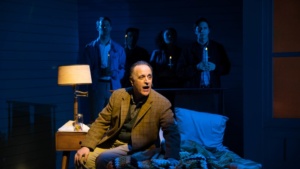 Adam Heller and the cast Photo by Russ Rowland

With a title like A Letter to Harvey Milk: The Musical, a play immediately tells you it’s subject is heavy, poignant, and in this current cultural climate, relevant. If you’re seeing this play, it is safe to say you know who Harvey Milk is, but for those who don’t, he was the first openly gay politician in California during the 70’s who was murdered by Dan White. He was often heralded by the gay community for his outspoken, loud-and-proud campaigns. This new musical does a very nice job of taking such a topic and making it fun and entertaining, while not overloading the audience with historical facts and political jargon. But ultimately with its final scene, it makes a person question: would Harvey want to read this letter? 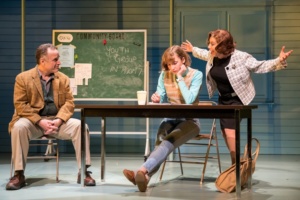 Written by a team consisting of Ellen M. Schwartz, Cheryl Stern, Laura I. Kramer, and Jerry James, A Letter to Harvey Milk starts with Harry Weinberg (Adam Heller) being jolted awake by his recurring nightmares only to find his deceased wife, Franny (Cheryl Stern), has come back to visit. When asked why he is so upset, Harry catches his wife up on his recent endeavors, including the writing class he has been taking and the assignment he feels is the cause of his nightmares. Barbara Katsef (Julia Knitel), his twenty-something teacher, has asked him to write a letter to someone from his past, someone who is no longer alive. Franny assumes this letter would be to her but finds out that Harry wrote to his old friend, Harvey Milk. The letter itself is a beautifully written declaration of how Harvey meant something to the people then and now; how “the day you died, the people cried”. Barbara is touched by the letter; feels it’s power is so strong it deserves to be published so people like her can see that there are people like Harry out there. But what follows feels like a 90-minute musical about putting gays back into the closet. 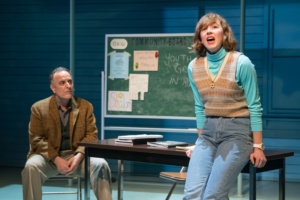 Harry sings and jokes about how he enjoys this new writing class, and Franny is ecstatic to see he is doing something – as long as he doesn’t share details with his teacher he never shared with her. But when he recounts how he learned his teacher was a Lesbianca – a word he creates for her in Yiddish as there is none – not only does Franny take offense to such a “shanda”, but we get the sense there is more to Harry’s past than he is willing to let on. He seems to accept Barbara’s sexuality with no question, but when she uses the word Lesbianca in public, Harry is furious and questions why she has to tell everyone. To Harry, it’s ok to be gay, as long as you don’t let anyone know. This idea is directly opposite of what someone who had read his letter to Harvey Milk would think. Barbara, of course, is insulted and rushes off. After some time to cool off, the two meet again at the park, and while both apologize for their reactions, there is no real change. When Barbara brings up getting Harry’s letter published again in a gay magazine, revealing a shirt branded with a pink triangle, Harry’s true motives are revealed. 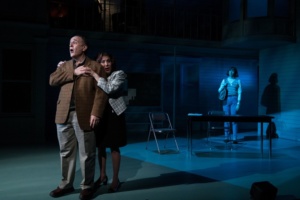 It turns out Harry was held captive in a concentration camp in his youth. There, he and his best friend, Yussl – who was a known “faygeleh” – were almost separated. Harry saved his life, and the two shared one night in each other’s arms. As Harry puts it, he was going to die any day, why not? Yussl returns the favor and saves Harry’s life by keeping their tryst a secret, at the cost of his own life. This recounting sheds light on Harry’s motives and certainly starts to explain his actions, but sadly, that is where the play ends. 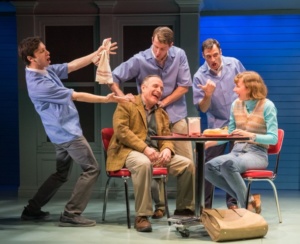 Watching this play, I struggled with determining what the writers were trying to say (an issue in itself). It can’t really be a musical about one of the most influential gay rights activists being used as evidence that the gay community should go back to hiding in the closet, sneaking dirty glances at each other across the room. Keep the gay away to stay safe. But that’s the only conclusion I can come up with. Harry experiences three relationships with homosexuals, and in each, he tells them to be less of who they are, no one needs to know the truth. While it is true he does this out of love and fear for them, ultimately, it only lends to the demoralization of the gay community. Not to mention insinuating homosexuality is something one might enjoy for a night, or as a deathbed whim.

That’s not to say the show was not entertaining in other ways. The lyrics by Ellen M. Schwartz and additionally Cheryl Stern paired with music by Laura I. Kramer held their own. “What a Shanda” sung by Stern as well is fun and laughable, in the good way. “Love is a Woman” tells a beautiful lesbian love story, even if it doesn’t have the happy ending one wants. And “Weren’t We” is reminiscent of “You’re Timeless to Me” from Hairspray. 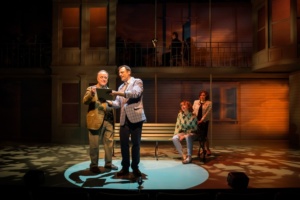 Performances from Adam Heller and Cheryl Stern give Harry and Franny that enduring love feel, showing this couple has been through it all and loves each other deeply, even after they have been separated by death. Michael Bartoli as Harvey Milk is playful and charming. Jeremy Greenbaum, Aury Krebs, and CJ Pawlikowski all play various roles and sell each one. Julia Knitel has a beautiful voice and brings a tenderness to the character of Barbara, but she doesn’t quite grasp the fire and urgency of a lesbian fighting for her rights in the 70’s. She is a lesbian of today, who’s used to being out and proud, still fighting, but with some wins under her belt.

Sound by David M. Lawson and lighting by Christopher Akerlind were sharp and intelligent, lending to the scenes of pain that littered each character. Scenic design by David L. Arsenault worked well on the small, from scene to scene, but the overall set design felt unnecessarily overwhelming. Costumes by Debbi Hobson where time appropriate and fun.

In today’s fight for equality, A Letter to Harvey Milk could have such power and influence on those who don’t understand the gay agenda and rights movement. Or more importantly, what it’s like to have to go through something like fight for your rights as a person. Unfortunately, it seems to have been written by those people. Then again, they could always site the Twinkie Defense.