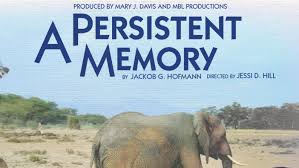 A Persistent Memory May Never Of Had One To Begin With

A Persistent Memory May Never Of Had One To Begin With 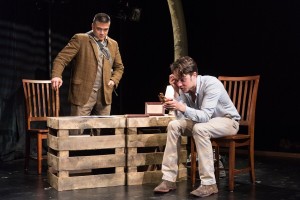 You wonder how a show gets produced and more importantly cast when the first thing you see is an actress miming playing a violin and it looks like she has never played before. Jackob G. Hofmann’s A Persistent Memory, which opened tonight at the Beckett Theatre at Theatre Row doesn’t have a whole lot going for it. 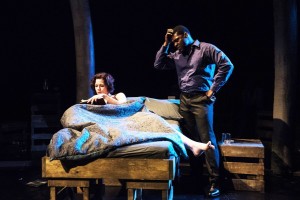 David Huntingon (Drew Ledbetter) is rich, spoiled, womanizer, who is damaged. On a trip to Uganda, while interviewing Olivia (Victoria Vance), a Belgian UNICEF worker, who’s worried about a change in elephant behavior, he is hit on and later on sleeps with the cougar worker. Olivia explains several months earlier a Brazilian poet was trampled to death and the elephant mourned so she died over the incident.

Elephant expert Karem (Ariel Estrada), explains to David that humans “David,” are like elephants, they remember more than they should.

David is dealing with the deaths of his mother and brother, as his stepmother Marie (Lisa Bostnar), his friend Elijah (Richard Prioleau) or his girlfriend Carly (Claire Warden) try to send his demons packing.

It is hard to tell where exactly this play fails, as the acting is so inconsistent and the cast speaks in sing song that it lulls you to sleep. The plot is so convoluted, that you just don’t care enough to pay attention. Ledbetter is not charismatic enough to make us care and his role, which is thinly written and confusing.

I honestly don’t understand how this got produced. For a 90 minute show, it felt like an eternity.