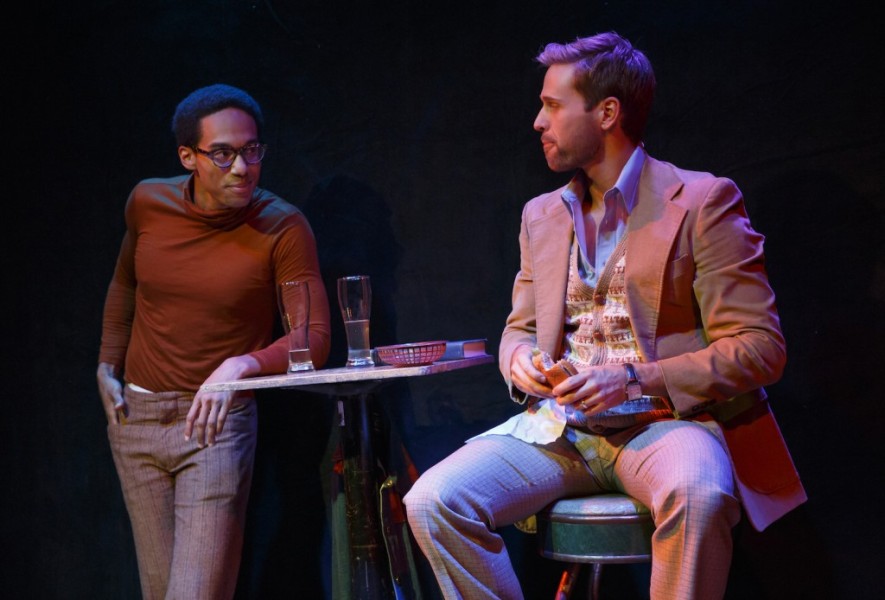 It is fitting that A. R. Gurney’s world premiere of a pair of one-acts Two Class Acts which consists of  Ajax and  Squash are the final shows at the Flea. The two have had had a long standing relationship. In both plays  professors and students are put to the test, however they do not always seem practical.

I saw Squash, first. Here Dan Proctor (Dan Amboyer, who plays the twin brothers Thad and Chad in the TV Land series “Younger”) plays a teacher obsessed with squash. We first meet him as he is shirtless and looking God like. His student Gerald Caskey (Rodney Richardson), is gay, African-American and clearly has an agenda. He comes onto the teacher who is not interested. He is hoping to turn in a term paper early for extra credit and to see Dan naked. Dan’s wife Becky (Nicole Lowrance), the mother of three young children, is obsessed with her husband getting ten-year. When she hears her husband was hit on she assumes it was a female. Dan can not bring himself to tell her it was a male. When Gerald recieves a C minus, because his paper because did not follow the assignment a discussion on Eros and Agape commence. As Gerald stalks him Dan’s marriage becomes less perfect and this leads to Dan doubting his sexuality. For no reason ever explained Dan agrees to explore with Gerald, however Gerald has taken up Squash and is now living with a female squash player. He tells his wife who leaves him and then suddenly Dan goes back to his life, reconciles with his wife, who makes sure that he receives tenure and now she is going to school.

The cast are all seasoned actors who do well, the problem is the material comes off saying everybody is a repressed homosexual and I don’t think that’s the case. 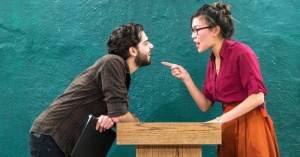 Ajax, involves the sexual tryst and connection between Meg (Rachel Lin), an adjunct instructor of classics and Adam (Chris Tabet), a obnoxious Jewish student who shows up when he wants. He refuses to do the assignment opting to create a modern take on the Sophocles play Ajax. Adam believes this play is a study of Ancient Greek PTSD. Adam hits on Meg, who seems oblivious until he offers her the leading role of Ajax’s concubine Tecmessa. Meg is a failed actress. The play ends up getting put on at the school and the faculty wants to use it to promote the school. For some reason Adam decides to rewrite the play adding more scenes for him and Meg. He adds in the uneven power struggle between the Palestinians and the Israelis making them the big bad wolf. Another teacher catches the two making out and brings the new play to the facility who  fear that the anti-Israeli slant will lose them funding.

Here the acting was done by the Bats, but it came off amateurish. Again the piece is offensive and not well written with holes in it wider than the rift between the Palestinians and the Israelis.

Stafford Arima direction was interesting and moved this plays in unique ways. Jason Sherwood’s sets were quite clever.

Hopefully when the Bats move to their new space the material will match the talent.

Suzanna BowlingMay 12, 2022
Read More
Scroll for more
Tap
Marin Maize Is Nothing Like a Dame She Is More
Sunday in the Park with George at the NY CityCenter Gala