A.R.T.’s Behind the Scenes Gives a Sneak Peak Into The New Musicals Being Groomed For Broadway 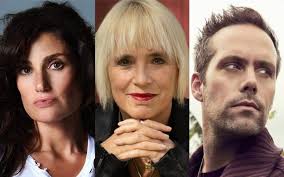 A.R.T.’s Behind the Scenes Gives a Sneak Peak Into The New Musicals Being Groomed For Broadway

I attended American Repertory Theater (A.R.T.) at Harvard University, theater’s new Behind the Scenes series with the writers, directors, and composers who are making work at the A.R.T. The multimedia events will feature songs and scenes from the shows in development; conversation about process, research, and collaboration; and interactive Q&As with the audience.

The reason I attended was Tony and Obie Award-winning playwright V (formerly Eve Ensler, That Kindness, O.P.C., In the Body of the World), Grammy and Golden Globe-nominated songwriter Justin Tranter (Selena Gomez, Ariana Grande, Demi Lovato, Imagine Dragons), and Tony Award-winning actor, performer, and songwriter Idina Menzel (Rent, Wicked, Frozen) share music and stories about the development of The Circle of Becoming, a wild new musical fairy tale about a teenage girl and her posse whose determination to save the planet endows them with powers they never knew they had, directed by Diane Paulus.

Idina Menzel (songwriter) started the collaboration. Her mission is to surround herself with creative, smarter and more talented people. She wants to challenging herself. Turns out Eve and Idina are friends and she wanted to work with Justin.

Their advice for young songwriters is to listen to people who aren’t listen to.

Next up on April 6th at 7:30 Co-creators Katie Pearl and Lisa D’Amour, composer Sxip Shirey, and performer Jennifer Kidwell share scenes, songs, and video from Ocean Filibuster, a new music theater experience that draws from myth, stand-up, and science to imagine a showdown between Senate leader Mr. Majority and the Ocean itself, commissioned by A.R.T. through a collaboration with the Harvard University Center for the Environment.

On Wednesday, May 19 at 7:30PM Daniel Lazour and Patrick Lazour (We Live in Cairo) talk with director Taibi Magar (We Live in Cairo, Macbeth In Stride upcoming), sharing songs and visual research from their new music-theater piece that explores cancer and relationships across time between patients and caregivers.

American Repertory Theater (A.R.T.) at Harvard University is a leading force in the American theater, producing groundbreaking work that is driven by risk-taking and passionate inquiry. A.R.T. was founded in 1980 by Robert Brustein, who served as Artistic Director until 2002, when he was succeeded by Robert Woodruff. Diane Paulus began her tenure as Artistic Director in 2008. Under the leadership of Paulus as the Terrie and Bradley Bloom Artistic Director and Executive Producer Diane Borger, A.R.T. seeks to expand the boundaries of theater by programming transformative theatrical experiences, always including the audience as a central partner. A.R.T. is committed to a long-term process of centering anti-racism in its practice, policies, culture, pedagogy, governance and organizational structure.

Throughout its history, A.R.T. has been honored with many distinguished awards including the Tony Award for Best New Play for All the Way (2014); consecutive Tony Awards for Best Revival of a Musical for Pippin (2013) and The Gershwins’ Porgy and Bess (2012), both of which Paulus directed, and sixteen other Tony Awards since 2012; a Pulitzer Prize; a Jujamcyn Prize for outstanding contribution to the development of creative talent; the Regional Theater Tony Award; and more than 100 Elliot Norton and IRNE Awards. Additional Broadway productions include Jagged Little Pill; Waitress (also US National Tour and in London’s West End); Natasha, Pierre & The Great Comet of 1812; and Finding Neverland. Under Paulus’s leadership, A.R.T.’s club theater, OBERON, has been recognized annually as a top performance venue in the Boston area, and has attracted national attention for its innovative programming and business models.

To see the rest of the series AmericanRepertoryTheater.org/Behind-the-Scenes. Single tickets are $20 with a pay-what-you-can option

Suzanna BowlingSeptember 23, 2022
Read More
Scroll for more
Tap
What to Watch in The New Year: March 18
Head Over To ARTECHOUSE For a Fractal Sensation