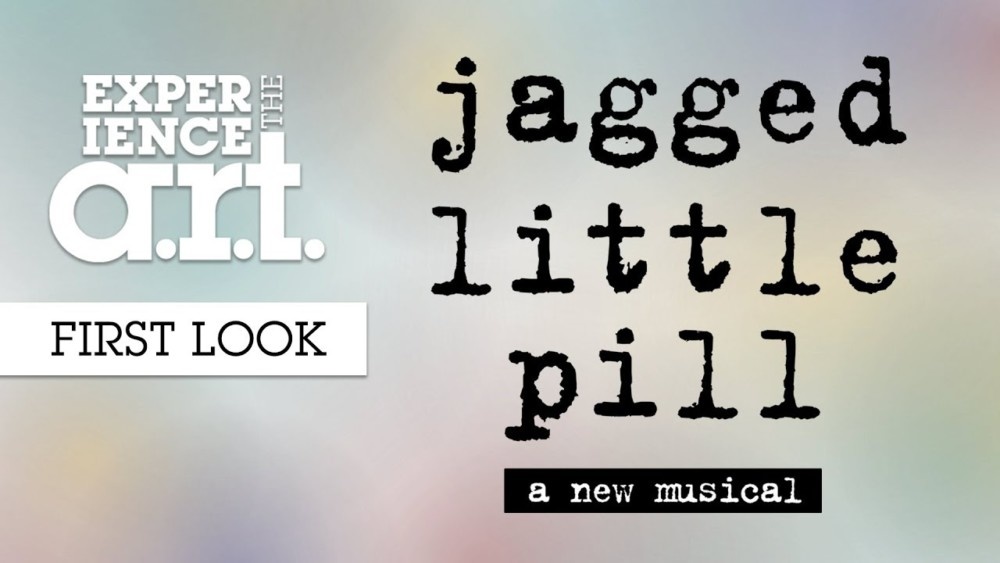 I can’t tell you how much Alanis Morrissette’s 1995 Jagged Little Pill (the album) sits strongly in my conscious mind as one of my all time favorites from one of my all time favorite musicians.  It’s a powerful collection of songs that was basically my gateway drug into the rich and dense world of Morrissette’s artistic and creative mind. Her songs still float through my blood stream with such staying power that when I went to see the new show at the American Repertory Theater in Boston, I was a bit worried that I wouldn’t be able to separate my memories of each and every song she has sung on her numerous albums from the ones that I was about to hear. It’s a juke box musical, basically, and sadly, that brings to mind such mind-numbing shows like Mamma Mia!, Summer: The Donna Summer Musical, and Rock of Ages. Luckily, this rock musical doesn’t feel as inauthentic as one might have dreaded.  In fact, it’s a theatrical gift to those Morrissette fans who are sitting on the edge of their anticipatory seats, holding their collective breath hoping to be blown away.

It has all the songs you could imagine, “You Learn“, “Right Through You”, “Hand in My Pocket“, “Mary Jane“, to name just a few (music by Morrissette and Glen Ballard; lyrics by Morrissette; additional music by Michael Farrell & Guy Sigsworth) weaving their way through a tale centered on a pseudo-perfect American family in suburban Connecticut at Christmastime. With a well-crafted scenic design by Riccardo Hernandez (NYTW’s Red Speedo, Public’s Grounded), rock star lighting by Justin Townsend (Broadway’s The Humans), costumes that try a bit too hard to be super cool by Emily Rebholz (Broadway’s Dear Evan Hansen, Indecent), loud and strong sound design by Jonathan Deans (Broadway’s Finding Neverland), and a creative rock concert video design by the wonderfully overworked Finn Ross (Broadway’s Mean Girls, Frozen), the theatrical cards are definitely stacked in this production’s favor.

But it is really in the powerful “You Oughta Know” sung to power-house perfection by the incredible Lauren Patten (Broadway’s Fun Home, Off-Broadway’s The Wolves) that tears the roof off the theatre and causing the audience to leap to its feet in a dazzling state of wonder.  It’s truly worth the wait as it comes in the middle of Act 2, breaking every preconceived notion possible and sending shivers of excitement through our systems.  It is oddly enough sung by the secondary character, Jo, but it carries more emotional weight and baggage than anything else. Sounding amazing with a rock star anthem magistery, and thanks to the musical direction by Bryan Perri (Broadway’s Wicked) and the music supervision, orchestrations, and arrangements by Tom Kitt (Broadway’s SpongeBob Squarepants, Everyday Rapture), the piece flies upward to the rafters. Not to say the rest of the cast or performances are any less worthy of our adoration, but there is nothing quite like that moment.  It will stay with you far beyond anything else this tightly wound musical  serves up.

It’s all pretty compelling stuff in Jagged Little Pill, although the plot is muddled with too many different directions and important political statements.  The #MeToo and #YouAreNotAlone movements get their placard waving moments, thanks in part to the strongly formulated story line revolving around Bella. She is intensely portrayed by Kathryn Gallagher (Broadway/Deaf West’s Spring Awakening) highlighting a slice of darkness by her intense rendition of the song, “Predator“. Entwined in that tragedy, is the fascinating and surprisingly well thought out connection to the perfect boy wonder and prodigal son, Nick Healy, played with a deep and earnest passion by the very good Derek Klena (Broadway’s Anastasia). Naturally, his song, “Perfect” fits him and his predicament well.  Almost too well, as it encompasses the scenario too easy in its custom design. Here lies one of the more complex issues I have with the musical.  To make some of these songs work, and they do most defiantly, some of the plot twists and turns, especially the creation of Phoenix, played perfectly by Antonio Cipriano (BVP’s Brighton Beach Memoirs), feel far too convenient, without having much overall meaning to the main weight of the story presented.

That brings me to the more glaring problem within the story; its inability to really decide which of the two female leads this musical is really trying to inject into our nervous system.  Is it about the mother, Mary Jane? Who, because of a car accident and an addiction to being perfectly in control of herself and all else, finds herself falling hopeless over the edge. The scenario results in the most gorgeous twisted rendition of “Uninvited” sung achingly by Elizabeth Stanley (Broadway’s On The Town) and she feels like the natural theatrical choice, but she isn’t given full rein. This song is one of my favorites but I must admit that when someone casually suggested at intermission that Alice Ripley, of Next To Normal fame should play the tormented mother if and when it comes to Broadway, the fantasy casting became tightly implanted into my head that I had a hard time seeing beyond the brilliance of that idea. Stanley is good as the addicted mother, but she doesn’t find the darkly disturbed and angry ingredient that this part demands. Her husband, Steve, played beautifully by the strong voiced Sean Allan Krill (Broadway’s Honeymoon in Vegas) is functional at best, with their duet “So Sexy” feeling more like an excuse than a good reason. But their relationship works, especially when the brilliant “Thank U” rears its glorious head in just the nick of time.

But the musical also plays with the storyline about the complex struggle for identity, in all aspects of the word, for the teenage adopted “Unprodigal Daughter“, Frankie, played by the least effective member of the cast, Celia Gooding (FAME, Urinetown). Her singing feels the most strained of the group, failing to register in the comparative Alanis struggle inside our heads, but she does get a focus that feels like a battle for supremacy. Gooding sings well with the softer “That I Would Be Good” performed neatly with the sexy Phoenix (Cipriano) as well as the sensual “Head Over Feet“, but the iconic “Ironic” doesn’t feel as true or organic, and her storyline grabs at our hearts with less pull than the amount of energy it is given. There is an imbalance here, asking us to question who is really the organic center and heroine of the story. The choreography, by the slightly over-zealous Sidi Larbi Cherkaoui (Joe Wright’s film “Anna Karenina“) could also use a bit more of an organic tonic dashed over its design, as the movements feel far too stereotypical to the source material, trying so hard to give us a punk rock esthetic as if grown from the earth of one of Alanis’ concerts.

As directed by the wonderfully electric Diane Paulus (Broadway’s Waitress), one of the most difficult aspects of the new musical, Jagged Little Pill is for the ultimate Alanis fan to find a way to separate the analytical and memory-infused mind from the compelling and complex story that sits somewhere slightly uncomfortably inside the book by the wonderfully smart Diablo Cody (“Juno”, “Young Adult”).  Each moment my brain was thinking and wondering very loudly: what will the next famed song be? And how will it fit snugly into the story that is unfolding before us? But more importantly, or let me re-phrase that, more dangerously, how will each performance of each song compare to that magical voice that exudes from Alanis? Will I be able to disregard the impossible and hear it from the singer on the stage without minimizing it? Because, to be frank, nothing will sound as perfectly tuned-in to the song as Morrissette’s recorded performances of each. But, if structured and performed strongly with a deep emotional and intuitive integration, it might not matter, or at least it shouldn’t in the end. And it doesn’t, overall, basically. Because the music is sublime but it takes a process to get to a place of acceptance, and about two-thirds of the way through I was able to silence that other voice and swallow that Jagged Little Pill happily with an ease that surprised my senses. Its heart and soul are in the right place, and with a few tweaks here and there, and a look at the focal point and perspective, I’ll be looking forward to rocking out with Alanis on Broadway sometime soon. So Thank U Alanis, for being so decidedly awesome.

Suzanna BowlingMay 6, 2022
Read More
Scroll for more
Tap
To Kill a Mockingbird Stratford Style
Straight From NYMF: Interstate The Musical Leads Us To Our Best Selves