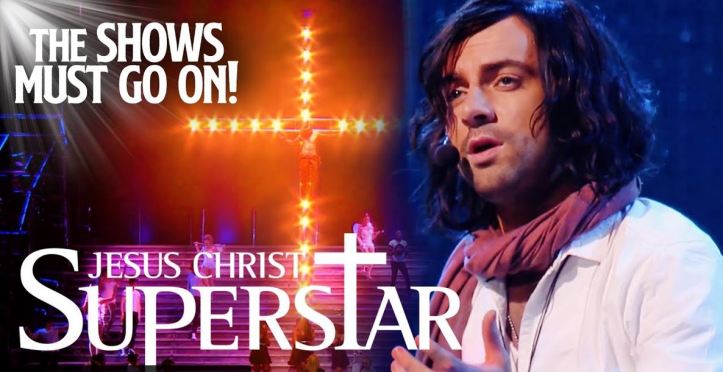 “It’s all fixed and you can’t stop it”

That is the most powerful line in the 2012 production of the touring company of  Jesus Christ Superstar directed by Laurence Connor. Now on view by The Shows Must Go On!

Andrew Lloyd Webber’s music and Tim Rices lyrics are well sung, the concept is rather brilliant, but the show is a mess. The standouts are not the leads who can not act, but Alexander Hanson as Pontius Pilate, Pete Gallagher as Caiaphas, Gerard Bentall as Annas, Michael Pickering as Peter and Giovanni Spano as Simon.

The leads are Ben Forster as Jesus who does not look the role, nor can he act. We never feel sympathy for him. At the most dramatic part of the piece when he is hanging on the cross it feels fake, for there is no tension in the arms. He can sing the role and his high notes are glorious though. Former Spice Girl – Melaine C is Mary Magdalene, of the three leads, she can neither act or really sing this role. She looks like an over the hill street kid, instead of a woman who has know the pleasure of men and manipulates them, but is now caught off guard. I don’t know why casting directors find it so hard to cast this role, as it is rare to find a good Magdalene. The role requires a voice whose timber is innocent, yet smokey. Faring the best is Tim Minchin as Judas who sings the role to perfection. The problem is he is inconsistent in his acting, but I blame that on Laurence Connor. The scenes when he is with Jesus are powerful, but then when he is with Caiaphas and Annas he is blank and this is a turning point. Also the “Superstar” number is odd. Judas seems more like the antichrist.

Connor has set his Superstar here and now and it is contemporary and bold. The apostles and Jesus followers are street kids, anarchists who are more like “Anonymous” East Village hippies. The Pharisees are like the CIA or FBI. In “What’s The Buzz” they tweet and the videography truly adds to the production. This was a great concept but lacked in focus.

Kevan Allen’s choreography is mostly gymnastics like cartwheels instead of exciting movement that shows his cast can dance. It comes off as if he cast singers not dancers. It is klutzy and unappealing. In the “Superstar” number where he had a chance to shine, it is more like bad Supreme movements done amateurishly. Even in the normally hysterically dry song by Herod played by Chris Moyles, this witty number has him as a droll game show host in red crushed velvet. Will the audience vote Jesus is a fraud or a lord? Great idea again poorly executed.

There is spectacle, but here music is king and the heavy rock score is played to perfection, sung mostly well and on Easter weekend it is just what the doctor ordered. It is also a step up from the 2018 NBC live TV musical treatment and the 2012 Broadway revival directed by Des McAnuff.

This show is filmed well and definitely is a must see if you are a musical theatre buff.

Suzanna BowlingMay 16, 2022
Read More
Scroll for more
Tap
The Glorious Corner
What to Watch in The New Year: April 5