A Romeo & Juliet for the Hamilton Age 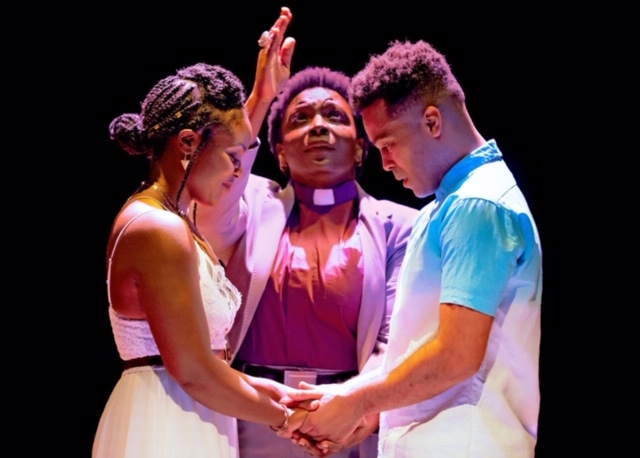 A Romeo & Juliet for the Hamilton Age

After the immense success of Six last summer, Chicago Shakespeare Theater’s follow up is a completely modern rebranding of the classic love story, Romeo & Juliet. It was clear from the first scene, set on a graffiti covered basketball court, director Barbara Gaines intended a new spin on this 400-year-old love story. Set in August 2020, the Capulets and Montagues are feuding families presented as rival gangs, first in a battle of words, wits and then fists. While these leading families were the two pillars in a community uprooted by their own generations old conflict, no one was above a nasty street fight. This cast of 25 still spoke in Shakespeare’s traditional verse, but when appearing in Mieka von der Ploeg’s modern costuming, a la Batman’s cowl and The Avenger’s Assembling masks at the family’s Fourth of July cookout, all of the traditional rules for presenting Shakespeare have been fervently tossed out the window.

As the titular characters, Romeo (Edger Miguel Sanchez) and Juliet (Brittany Bellizeare) are a handsome couple, full of palpable chemistry and cheeky zest. As for the remaining cast of characters who populate the City of Verona, it was a lush array of race, size and gender. Reflecting the real world, just like the colorblind casting of Hamilton, this is not your Grandfather’s Romeo & Juliet. The May/December romance of the Nurse (Betsy Aidem) and her much younger lover, Tynalt (Sam Pearson) played here strictly for laughs. As for the quarrelling parents, Chicago Shakes perennials Mr. Capulet (James Newcomb) and Mrs. Capulet (Lia D. Mortensen) and Mr. Montague (Dale Rivera) and Mrs. Montague (Brianna Buckly) rule. When the Chief of Police (Amir Abdullah) arrived on the scene, I half expected the familiar Law and Order “dun-dun” sound effect to play.

Pulling no punches, the murders and deaths are not romanticized. This Romeo left a body count in his wake. Trust me, this version amped up the harsh realities surrounding murder, a less than subtle nod to all of the gun violence and death that plagues life in modern day urban cities. This is a tale of love and tragedy with the emphasis squarely on tragedy. Fight director Rick Sordelet clearly worked overtime with this cast, every character’s flinch, punch and stab felt all the way up to the balconies.

Moments of levity were often mined from Step Paul’s light-hearted choreography. The Fourth of July family line-dancing party scene could exist in any public park around the city and inspired more than a few chuckles from the audience. Aaron Spivey’s lighting punctuated the softness of young love and the harshness of tragedy quite succinctly.

Hauntingly told, Chicago Shakespeare Theater’s Romeo & Juliet is an ambitious retelling of a classic love story. Over two dozen performers mining both laughs and tears from a generations old feud. Perhaps this modern reimagining may not be everyone’s taste, but if art is to hold a mirror up to society, I cannot imagine a more revolutionary telling of this tale. Love is not more powerful than a bullet, and I believe that is the takeaway. Those left behind do not sentimentalize their grief.