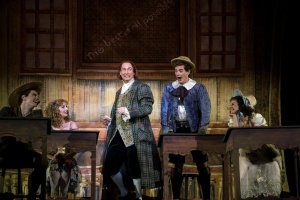 New York City Opera’s revival of Candide, opened tonight at the Jazz at Lincoln Center’s Frederick P. Rose Hall. Clarke Dunham, has created an opulent set in appealing colors, that spark the audience into a world of whimsy. Judith Dolan’s magical costumes are also a highlight, with lighting designer Ken Billington, serving up all the right hues. Under the direction of Harold Prince, this was one coveted ticket. Being a huge Hal Prince and Candide fan, nobody was more excited than me. From the moment the orchestra starting playing under the direction of Charles Prince (Hal Prince’s son), something was wrong. There was no thrill. The orchestrations, which I know by heart, sounded muffled and thin. Was this due to sound designer Abe Jacob’s? The answer is partly yes, but more on the sound design later. Then Gregg Edelman (Wonderful Town) began his multiple roles as Voltaire and though he was in wonderful voice, Edelman just does not have the comic chops to take over this role. He was good, but not great. He was hysterically funny as Dr. Pangloss, turned crazy philosopher towards the end. Jay A Johnson (On the Town) is a decent Candide, but he really needs miking, as he is not an opera singer. His songs “It Must Be So” and “It Must Be,” had beautiful tones, but his duets with Meghan Picerno as Cunegonde, made him seem out of his league. All of these would have sounded so much better, with a better sound design. Ms. Picerno could sing the role and added in some spectacular high notes making “Glitter and Be Gay,” even more stratospheric. Her portrayal, however brought out the worst in the personality of Cunegonde. Cunegonde, needs to be innocent, unaware of how greedy she is. She has to fight against her entire dialogue and lyrics that make her superficial and only after the finer things in life. But remember she still loves Candide, despite his background and status. She still chooses him with her own free will. Keith Phares as Maximilian was in good voice and had some inspiring moments. 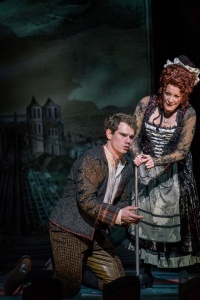 Linda Lavin (Our Mother’s Brief Affair) as The Old Lady was vocally not strong enough, but brought heart and some humor to the role. 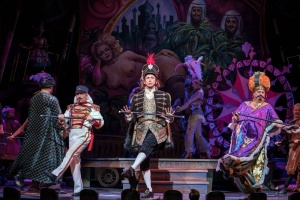 Chip Zien and Brooks Ashmanskas stood out in various roles. 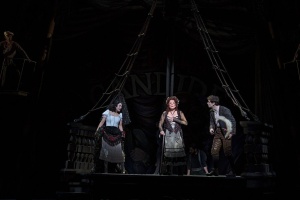 Even the dialogue has been changed and it does not help the show. Also cut were the fabulous “We Are Women” and “Quiet,” the duets between Cunegonde and The Old Lady. My guess is because Linda Lavin could never sing these. Hello, why not cast Mary Testa or Emily Skinner? Admittedly a lot of productions cut these two numbers, but they are spectacular and this was Hal Prince. 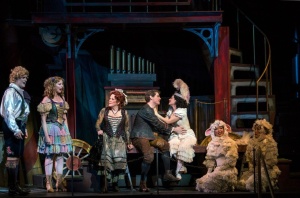 Prince’s and choreographer Patricia Birch, premiered Candide at the Broadway Theatre in 1974, where it won Mr. Prince and Hugh Wheeler (Book), Tony and Drama Desk Awards. Ms Birch also won a Drama Desk Award. The show was revived in 1997 at the Gershwin Theatre. 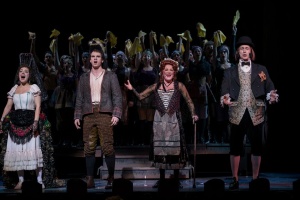 Kudos for this company’s finale of “Make Our Garden Grow,” which was luxuriously sung. They say if you at least end on a high note you win and this they did.

If you want to see a sublime production watch the video below where Lonny Price directs the 2004 semi-staged concert production with the New York Philharmonic under the brilliant conductor Marin Alsop. Without sounding mean, the student (Price was Hal Prince’s intern) surpassed the master, as you can see even under these hideous video conditions. 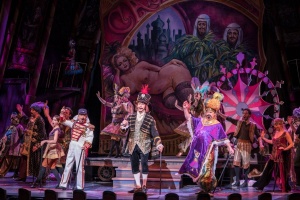