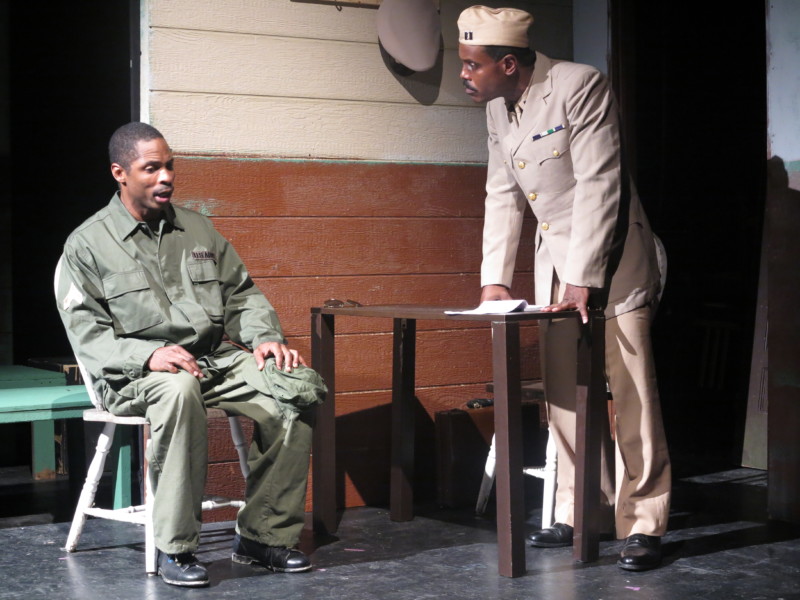 The culminating production of The Negro Ensemble Company’s 50th season is a remounting of the Pulitzer Prize winning A Soldier’s Play by Charles Fuller, directed by Charles Weldon. The production is done well, and the story is evocative with complex themes and characters.

In a segregated U.S. Army base during World War II, African American Sergeant Waters (Gil Tucker) is shot. The army sends Captain Davenport (Chaz Reuben) to investigate the murder. Through a series of flashbacks, the tyrannical and vindictive character of Sergeant Waters is revealed as the men are interviewed.  They tell particularly of how Sergeant Waters treated Private C.J. Memphis (Jimmy Gary Jr.), who hails from rural Mississippi – a fact that Sergeant Waters seems to despise. As he conducts the investigation, Captain Davenport finds Captain Taylor (Buck Hinkle) uncooperative. Captain Taylor, though he wants the investigation to be completed, is not impressed with the African American captain sent to investigate his company. Despite his obstacles, Davenport succeeds in discovering what really happened between Sergeant Waters and the men in his unit. 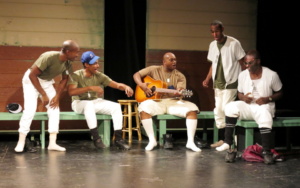 The design of this production is not overwhelming, indicating that the focus is intentionally on the characters and the story. Melody A. Beal’s lighting design cooperates with Chris Cumberbatch’s scenic design to portion off the stage into the few locations where this story takes place. The set is colorful but subdued, causing the drab colors of army uniforms to pop out. The costumes, designed by Ali Turns, are perfectly period and basic with the touch of character flair, namely Davenport’s MacArther sunglasses.

The actors are incredible. Their articulated “army” movement of the characters is theatrically compelling and creates high contrast when the men are not engaged in army activities. In addition, actors create very clear character traits within the decorum of army movement. This is most obvious in Arron Lloyd (playing Corporal Ellis). Since the characters are from various parts of the country, there are a few different accents on stage and each actor remains distinct throughout the performance. 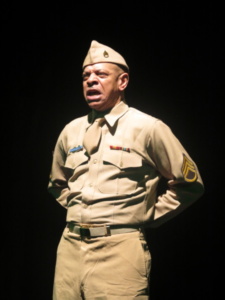 As Sergeant Waters, Gil Tucker demonstrates the arc and complexity of his character with intensity and ease. We fully understand Waters’ transformation because Tucker gives us every moment of it, in his pauses between sentences, in his smallest gesture. He has a captivating presence. Fulton C. Hodges, playing Private Wilkie, subtly displays the complex feelings of a man in his particular position. As Captain Davenport, Chaz Reuben creates a confident, empathetic, unyielding character with a smooth voice. Buck Hinkle plays Captain Taylor with vigor masking the character’s prejudices and sympathies with a sense of militant duty. Jimmy Gary Jr. plays Private C.J. Memphis with heart, and his jail scene is particularly heartbreaking.

Perhaps the most intriguing aspect of this play is its relevance to our current socio-political climate. While what occurs between the men in the play is not justice, it is realistic. At the end of the play, Captain Davenport describes how the events of his investigation are related in the newspapers, and the reports only perpetuate stereotypes of the era, of our era, suggesting that if we don’t search for and present the truth, then we will never change our perspective as a society.

This masterful and stimulating play is a must see.