A Star Studded Tommy Scores at the Kennedy Center 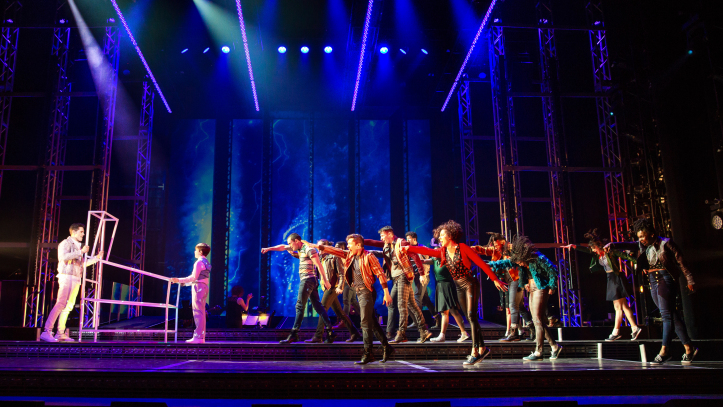 A Star Studded Tommy Scores at the Kennedy Center

Tommy, can you see me?

As directed and choreographed with a fevered energy and strong sense of style by Josh Rhodes (Encores’ Grand Hotel), the piece dives in deep with a highly ambitious retelling of the story about a “deaf, dumb and blind” kid, who rises up past his sensorial blocks to generate fervor and adoration as a cult pop hero. Played by three, Tommy is created out of trauma of a war he never sees, and the violence that swirls around him.  The set-up plays out within the lyric-free overture, in front of a cold blue metallic and geometric projection of love, war, destruction, and renewal, courtesy of the dynamically visceral scenic and projection design by Paul Tate dePoll III (Kennedy Center’s The Music Man), with hot and compelling lighting by Jake DeGroot (RTC’s The Robber Bridegroom), solid sound design by Kai Harada (Broadway’s Head Over Heels), and concise costuming by Andrea Hood (NYTW’s Love and Information). The look is profound and exhilarating, and even when the overly busy and structured moving rectangular boxes become too much, the ideas and creativity satisfy the senses never completely overwhelming us.  The boy, on the other hand, is feeling the tremors of his world and his complex surrounds, just as Townsend once stated in 1968, that “he’s seeing things basically as vibrations which we translate as music. That’s really what we want to do: create this feeling that when you listen to the music you can actually become aware of the boy, and aware of what he is all about, because we are creating him as we play“. So we watch on and join with the emotions and the ideas through our other fired up senses, taking it all in and experiencing his pain and frustration, even when the intellectualism of the framework gets convoluted and jammed up.

Tommy, can you feel me?

“It’s a boy” the mother is told happily in troubled times during the years of the war, but the young and optimistic Mrs. Walker, portrayed solidly by the strong and earthy-voiced Mandy Gonzalez (Broadway’s In the Heights), has difficulty seeing the complications that lie ahead for herself and her family, or even a way through the violent mistakes. Her war-torn returning husband, the brash and impulsive Captain Walker, deftly portrayed by the fantastic Christian Borle (Broadway’s Falsettos, Something Rotten!) is a surprise, you might say (on numerous levels), as troubled and disjointed from his wartime experiences as anyone in that contrary family dreaming of “Christmas“. After the shot that changes it all blazons forth, a four and then ten year old Tommy, portrayed by Declan Fennel (Signature’s Billy Elliot) at first, and then Hudson Loverro (Broadway’s School of Rock) soon after, finds himself trapped by trauma, lost inside his reflection without any obvious pathways for escape. The two young actors do a remarkable job finding the way to play “that deaf, dumb and blind kid” in an empathetic caring manner, even as the parents frantically attempt to cure his condition anyway they can try. And after attempt after flawed attempt, the adult Tommy finally flies in. Attempting to rise up to the cause by a very game Casey Cott (CW’s “Riverdale“), the handsome leading man delivers a well meaning Tommy, but one that doesn’t seem to carry the depth of voice and soul to elicit the heightened celebratory worship that his mother smashes in out of frustration. Her act creates a “Sensation” freeing him of his mental blocks and ushering in “Sally Simpson“, lovingly portrayed by Taylor Iman Jones (Broadway’s Head Over Heels) in an oddly throw away plot line and commentary on the worshipping of cultish religious leaders. Tommy retreats inward again, serenading the lot to “See Me, Feel Me” as he fades back into what really captivates the elusive hero. Cott fluctuates, just like the complicated Tommy, hitting the strides but never reaching the level of adoration that this show requires and seemingly demands.

Tommy, can you touch me?

But in this oddly constructed exploration of PTSD and celebrity worshipping, of disconnection and connected compassion, the creations that float in touching the young man in as many ways as you can imagine are where a lot of the juicy power-ball excitements exist in The Who’s Tommy. Brashly and brilliantly igniting the fire of sexuality and LSD fantasia is the illicit Gypsy, made famous (at least for me) by the legendary Tina Turner whose power could never be denied. Here in this softened down extravaganza, the “Acid Queen” of the Underground explodes forth with energy and excitement at just the right time by the uber-talented Kimberly Nichole (NBC’s ‘The Voice’, 8th season) finally torching up the momentum and energy of the show. She, and a few standout chorus members, Trina Mills and Khori Petinaud, fire up the energy and enthusiasm of the packed auditorium, lighting up a fire that up to this point seems to have been merely sitting back and taking it all in.

“Do you think it’s all right to leave the boy with Uncle Earnie” she asks, as the wicked relative sneaks in to “Fiddle About” behind closed doors. It’s one of the creepiest and most uncomfortable songs of the evening, pretty much of any musicals I can think of, but the number is perfectly presented by Manu Narayan (Broadway’s Gettin’ the Band…).  He brings comic timing to a part that is profoundly disturbing but always captivating, especially with his icky and fantastic Act 2 song and dance, “Tommy’s Holiday Camp”.

Behind other closed doors, beautifully created by the inventive Wesley Taylor (Broadway’s SpongeBob…), Tommy‘s wicked and sadistic thug-Cousin Kevin takes the creepy uncomfortable relations and heightens the discomfort with violent glee. He does a phenomenal job keeping us engaged and not tuned out. Taylor’s work impresses,  brilliantly hitting hard just the right amount of humorous sadism with his twisted facial expressions and pulling off his aerobic and athletic songs with ease, making us want to look away, but somehow he keeps us present and accounted for.

Tommy, can you heal me?

The pinballs fly, and the hypnotic vibrations and visualizations ratchet up the points, leading us towards that winning score. It’s a production to be celebrated, just like the born again Tommy, but all in all, I can’t say this feast of musicality completely invigorates nor captivates my soul. A more electric leading man might have helped, but I think, at least for this player, the overall game lacks the rhyme and the reason to play.  The larger than life themes ignite but rarely catch fire for very long, leaving us dangling and wondering what Townsend was trying to say. The big thematic bursts explode, but the overall left me a bit numb. It is as if I played one of those annoyingly loud and clangy pinball machines for a bit too long, and my eyes and ears can’t feel the vibrations any longer. It was fun while it lasted, but the lasting is short lived.