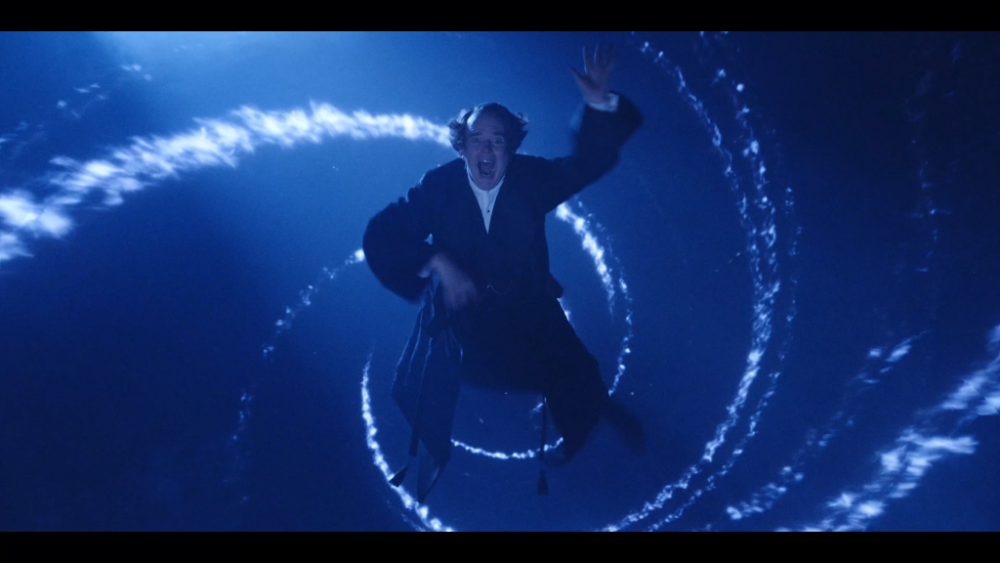 It’s only one day after Thanksgiving, and the Christmas spirits are already descending on us in force. Thank goodness, as I could use a bit of Christmas cheer these days. This is the first of many Christmas Carols that I am going to watch over the next four-ish weeks, including the one coming from The Old Vic that I’m watching December 12th. But I must say, if I’m going to start with one, this one, a joint project between Arnold’s TBD Pictures, La Jolla Playhouse, and On The Stage, is an exemplary telling to go down that snowy lanes of Dickens’ classic. It is A Christmas Carol unlike any other I’ve ever been witness to, filmed live on stage at New York’s United Palace, chosen by the crew in order to “preserve the power of the theatrical storytelling.” And indeed, it does just that.

The red velvet curtain pulls back, showcasing a delicately arranged panorama, meticulously drawing us into the unique and engaging telling of Charles Dickens’ A Christmas Carol. In Prose. Being a Ghost Story of Christmas, commonly known as A Christmas Carol. A novella, first published in 1843, it recounts the tale and transformation of a elderly miser, Mr. Ebenezer Scrooge. He is as well known a character to the masses as Jacob Marley’s ghost, the deceased former business partner, who comes a-knocking on Scrooge’s door late one Christmas Eve, dragging his chains and sad soul for a fireside chat. He’s has come, most dynamically in this production, thanks to lighting designer, Ben Stanton (Broadway’s Fun Home), with a purpose, to herald the arrival of three unique spirits, the ghosts of Christmas Past, Christmas Present, and Christmas Yet to Come. And with that grand flourish, courtesy of the director of photography, Maceo Bishop (Uncut Gems), the tale unfolds with a wise aplomb, delivering a well-needed outcome known to pretty much all of us. So it is in the telling of that tale where the intrigue lies, nowadays, and within this meticulous and dramatically fun staging, some true magic is doubly unlocked, and for that, I am “so full of gratitude“.

Starring in this one-man recreation, the magnificently clever Jefferson Mays, the man of a thousand faces and characterizations, finds the greatest success achieved. He flinches, angles, and deforms himself to create dynamic representations at every turn. For anyone who has had the pleasure of seeing him before on stage in the outstanding one-man play, I Am My Own Wife or the festive musical, A Gentleman’s Guide to Love and Murder, we know the detailed elastic brilliance of Mays, and together with one of broadway’s most imaginative directors, Michael Arden (Broadway’s revival, Spring Awakening), a new way of telling this well-known tale has been craftily created to perfection. Jefferson Mays (Oslo) floats in with a clear minded sense of purpose, playing over fifty roles in what can only be described as a master class of theatrical precision. He’s worthy to be Dickens’ partner in this telling in every way, delivering a thousand hopes and joys in every facial grimace that you have never seen the like of before.

Staged exclusively to be filmed and streamed for our holiday pleasure (and to raise funds for struggling theatres nationwide), the haunting spirited vision created is captured live and delivered intact with an intense sound and fury of a well orchestrated phantom’s arrival. The powerful imagery and spirit of Christmas shines as brightly as one could ever hope, thanks to the creative team that includes scenic and costume designer, Dane Laffrey (Broadway’s Fool for Love); lighting designer, Stanton (Broadway’s Fun Home); projection designer, Lucy Mackinnon (Broadway’s Jagged Little Pill); sound designer, Joshua D. Reid (Signature’s Jerry Springer: The Opera); hair and makeup designer, Cookie Jordan (PH’s A Strange Loop); and puppet designer, James Ortiz (Strangemen’s The Woodsman). The editing and tight fisted seamless storytelling is genius, as is the whole creation, delivering the classic Christmas tale in breathtaking and emotional clarity. The shapes and shadows that are orchestrated blaze with glory, finding a newnest to the story that will pull you in, even though we’ve heard it all before. This production of A Christmas Carol fills the theatrical space with a giant holiday spirit that will bring a (surprising) tear to your eye by the time Scrooge learns how to become better than his word, as the good old city in the good old world whirl around like a spirited dance on Christmas Day.

Aimed to be released worldwide on Saturday, November 28, this streaming video event will benefit partner theaters all around the United States that have been devastated by the pandemic. The partner theater program is a joint project between Arnold’s TBD Pictures, La Jolla Playhouse, and On The Stage. In addition to La Jolla Playhouse, other partner theaters currently include Actors’ Playhouse, Geffen Playhouse, George Street Playhouse, Iowa Stage Theatre Company, Sankofa Collective, South Coast Repertory, Shea’s Performing Arts Center, Springfield Contemporary Theatre, Theatre Tallahassee, and Vermont Stage with more to be announced in the coming weeks.

The filmed version of A Christmas Carol is based on the acclaimed 2018 production which made its world premiere at Los Angeles’ Geffen Playhouse. Tickets for A Christmas Carol are now available for purchase by clicking here, via www.achristmascarollive.com. Tickets purchased via the A Christmas Carol website will automatically benefit local community theaters based on ZIP code. Proceeds from tickets purchased outside of the U.S. or non-affiliated ZIP will be divided and shared with the partner theaters. Now that makes me a happy Scrooge, and is a good start to this holiday season.