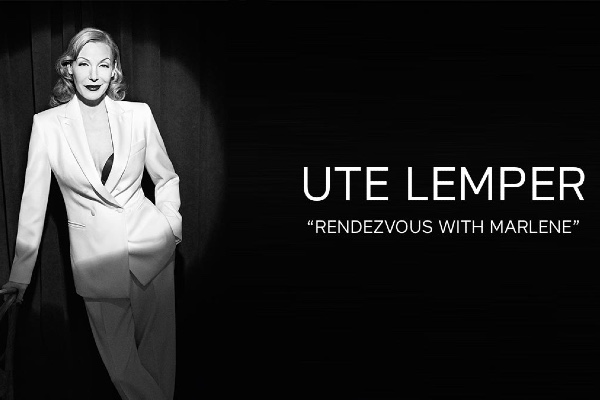 Touchingly filmed within the perfectly coiffed and orchestrated Club Cummings in the East Village of New York City, Ute Lemper finds her interactive connection, rhythm and pitch inside the very personal one-woman creation, Rendezvous with Marlene. It’s the perfect venue for the piece, filled with a red lit ambiance that pulls us deep into the smoky Euro club scene with an assured guiding hand. I found myself drawn to the cabaret edge, looking for a shot of something strong from that handsome bartender (a sexy Darren Dryden). That drink feels essential to the ingestion of this captivatingly interesting libation, to help keep us thirsty for more, as directed and edited with a bit too loose of a hand by Evan Quinn. Lemper, a Broadway and West End star whose black-clad image lounges most seductively over the Chicagomarquee on Broadway, beacons us inward, telling us about that time she received a phone call, out of the blue, some 30 years ago, from the legendary and iconic Marlene Dietrich. As a true fan, Lemper was surprised and awe-struck, she tells us; flabbergasted, but reveals quite confidently that there was an obvious reason for the call. The French press had just crowned her with this descriptive, “the new Marlene“. And Lemper, a powerfully strong presence on the stage, never seems to shy away from praise sent her way, layering it on as easily as those slinky gowns that adorn her seductive figure.

Marlene, then aged 89, was a reclusive legend, living out her days in an apartment in Paris. She used the phone as her only link to the world that was just outside her door. One day, she called Lemper, we are told, not from a desire to be interviewed, but for the opportunity to talk, and not be questioned. She wanted Lemper to listen faithfully to her tale, and take in all the dark shadows and bright highlights of the legendary Hollywood Icon’s history. Into the phone and the ears of Lemper, she described her long, exciting, tumultuous career, veering left and right through her involvement and collaborations with famous names (almost too many to count), from her work (and her bed) in the movie and music industries. She desperately wanted to share and reminisce about her love stories, her sexual liberations, and what it was like to be Marlene, a ‘woman of the future’. It’s a story we are all most interested in and fascinated by, as it is filled to the salted rim with everything we love in a Hollywood story; sex and fame, entangled and intertwined in the bedsheets of a gorgeous legend. With Lemper, the Moliére Award winning performer (for her performance as Sally Bowles in a Parisian production of Cabaret), standing center stage and directing us through the one-sided conversation she had that night, this homage to a star demands attention. Tellin gus that we must lean in with anticipation, for this magical fusion of theatre, cinema, and music story-telling called Ute Lemper: Rendezvous With Marlene. It mostly works, until it doesn’t, but whether that is because this is really a show best served by the live stage and not by a loosely constructed taping (Director of Photography: Scott Mason), I’m not in the position to say.

The two-plus hour stage show is Lemper’s homage to the legend, structured from a dialogue between the two that lasted, we are told, three hours. The stories, and there are numerous, are filled to the cocktail glass rim with starry names and deliciously decadent secrets, worthy of the club they are being told in (Club Cummings is a place rich in back room history, filling me with memories of days long past). The show overflows almost too self consciously with name dropping and indulgent scenarios that start to lose their intrigue as it enters the second hour. Lemper is dynamic, and finds meat and power in the squinty eyed frame of Marlene, gloriously bringing song after song to a full and brilliant life (Piano/Music Supervisor: Vana Gierig), but the piece needs a strong editing hand, both in the writing and the filming, to keep us fully tuned in. It becomes a bit too self congratulatory and unfocused, both for Dietrich and Lemper, as they take their time slithering their way through stories that get lost along the way to that much needed drink at the bar.

She slips into the role of Marlene with a breathtaking ease, finding clarity and authentic nuance in every step. Her embodiment of the legend is solid and surprisingly deep, making the distinction between the two clear and concise. But it is, most definitely, the singing that keeps us fully engaged, enticing us to pay full attention, even when we stop listening to the strung-out tales and the dirty delights that slowly weave the ribbon of life that exists in between songs. She starts to veer off track, much like a drunken self absorbed Norma Desmond, begging us to fall in love with her again, even as the melancholy and the pain in the heart that hurts the most loses focus and fade away like youth. There are moments of pure rapture and intrigue, mixed with dynamic musical numbers, like “Just a Gigolo” and “Lili Marleen” that coax us into the back of a Berlin nightclub, giving us a bit of Mae West delight, and Hedwig naughtiness. But once we go back, the haze of the backroom makes it difficult to see our way clearly. I just wish the drive and connective tissue was sharper and the chapters of her life more succinct. It’s clear that the three hour call has been pared down for this blurry-eyed, most likely authentic, execution, but meandering tales, even if true, start to lose their hook. Cut down to a more manageable one hour plus cabaret show, this “One For My Baby” would definitely sing stronger to the “Boys in the Backroom“. I just wish I was gifted with the opportunity to see this show performed live, with a cocktail in my hand, and the energy we all miss in the darkened room of a cabaret. It must have shined bright, as bright as this legend once did.

Ute Lemper: Rendezvous With Marlene will be streamed online on Wednesday, November 25th at 8pm EST and Saturday December 5th at 2pm EST. Tickets are $25 and may be purchased here.

Stephen SorokoffApril 11, 2021
Read More
Scroll for more
Tap
What To Watch November 28th To Take Away The Blues
Musicals That Said So Much: Anyone Can Whistle