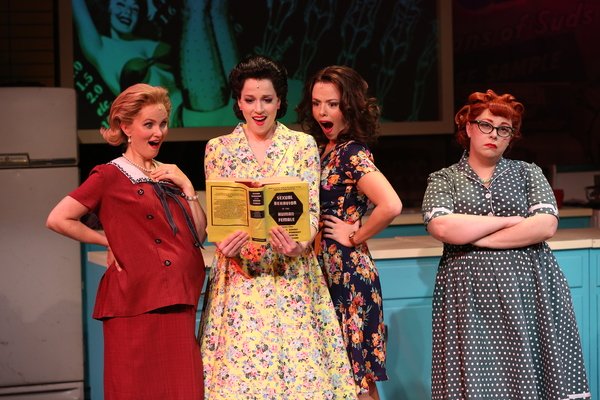 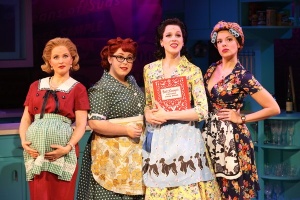 A Taste of Things To Come the new musical by Debra Barsha and Hollye Levin that opened tonight at The York Theatre will play for years. Much like The Marvelous Wonderettes, we follow the friendships of four very different women both in the 1950’s and the 1960’s. Meet the “Wednesday Winnetka Women,” four young Illinois housewives, who live each week for this gathering where they can be themselves. Run by Joan Smith (Paige Faure), a born leader who though childless, prizes her Betty Crocker cookbook and getting dinner on the table on time. Connie Olsen (Autumn Hurlbert) is expecting her first baby any day now and has something bothering her. Agnes Crookshank (Janet Dacal) is single and dreams of getting away from small town life to Manhattan. Last but not least is the baby machine Dottie O’Farrell (Allison Guinn) whose pride and joy is her multiple kids who drive her crazy. As we enter their world we learn they in 1957, the women are entering a Betty Crocker cooking contest. But change is in the air. Dottie is fine with the tried and true and as secrets get leaked and Connie goes into labor the four realize they have different dreams. 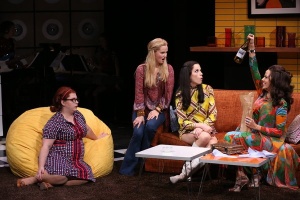 In act two ten years have passed and the women have all come into themselves. As a joint is passed we learned what is behind those confident demeanors. 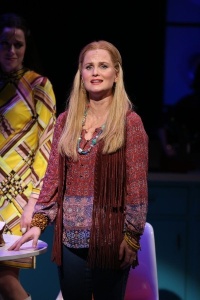 The music by Debra Barsha and Hollye Levin is catchy and fun. The tale simplistic, but gets it’s point across. Right now any shows about empowering women , especially now will hit the audience like a bullseye. The dig about becoming a women becoming a president will ring true here but not across the country and the audience who this is meant to appeal to. This is a piece of nostalgia and right now most everyone I know, is sick of still dealing with this election. 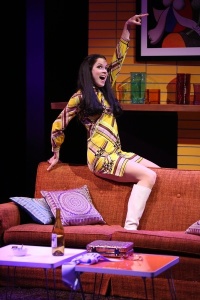 The cast is superb and they all make the most of their material. I just want to know  the vocal range of Allison Guinn because this girl seems to have no bottom or top. Along with her comedic chops she is seamless and impressive. Ms. Dacal oozes sexiness, Ms. Hurlbert has honed her craft and Ms. Faure shows she is “Something Burning.” These girls represent the best of New York. 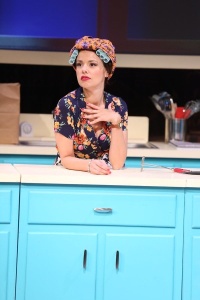 Broadway choreographer Lorin Latarro (Waitress), steps in as director to make this show flow with ease. I loved the four piece all when band.

Steven C. Kemp’s burnt orange, gold and teal 1950s kitchen reminds me of home, but the 1960 sset is pretty impressive. I also loved the 50’s styled house dresses and especially the 60’s garb by Dana Burkart. I would love to own the dress that Ms. Dacal wears in the second act. The projections by Justin West’s pull the audience back to a simpler time, a time where family values and dinner on the table set the course of the day. 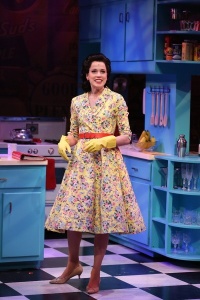 Suzanna BowlingMarch 4, 2021
Read More
Scroll for more
Tap
a dog story Will Have Cupid Pawing His Way Into Your Heart
Dead Poets Society: Walk Your Own Walk