A Times Square New Year’s Eve Celebration Like No Other Before And, Hopefully, After 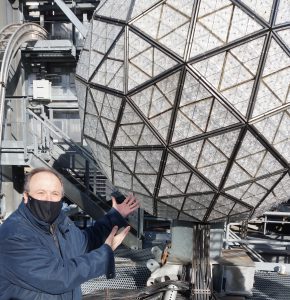 A Times Square New Year’s Eve Celebration Like No Other Before And, Hopefully, After

This year’s New Year’s eve celebration in Times Square was like no other and probably will never be like this one ever again.

There was no crowds. Ground zero for the Time’s Square area — and a dozen of blocks all around were cordoned off by NYC police. In fact, since Tuesday, they have been limiting access in order to prevent the massive gathering that had made this annual celebration one of the must-do events for global tourists.

Co-producers of the Times Square New Year’s Eve celebration –The Times Square Alliance and Countdown Entertainment –  outlined the details of the highly anticipated December 31 event, which was broadcast for television and internet audiences without public revelers in attendance.

Said Countdown Entertainment President and producer Jeffrey Straus, “This year, undoubtedly more than any other in recent memory, we recognize the need to celebrate our local heroes. As we join together to ring in the new year, the families celebrating in Times Square mirror families across the globe celebrating safely from their own homes.”

Times Square New Year’s Eve recognized the “Heroes of 2020” as the event’s official Special Guests – those that showed the courage and creativity to help us through this year – first responders, frontline and essential workers and their families who sacrificed in 2020 to provide care and support for their communities. The Heroes of 2020 were represented onsite by New York families of first responders, frontline and essential workers, whose personal stories from the past year inspire all of us and reflect the best of the human spirit. These New York stories of sacrifice and public service are representative of family stories in every community in every state across the country and around the world.

The Special Guest designation is an annual tradition for Times Square New Year’s Eve celebration that dates back to the mid-’90s. Each year since, by selecting a Special Guest, the producers honor inspiring individuals who “represent public service, resiliency, and the human spirit.”

“The Special Guest plays a pivotal role in the Times Square New Year’s Eve celebration, most notably by representing resounding resolve and a determined spirit, at a time when the world collectively awaits a renewed beginning,” said Tim Tompkins, President, Times Square Alliance. “This year, it feels most appropriate to shine a spotlight on the individuals who are tirelessly leading our nation through hard times with unshakable strength, determination and poise, as well as their families, who deal with their own set of sacrifices.”

Historically, the Special Guests joins the Mayor of New York City on the main stage just before midnight to lead the 60-second countdown to midnight and press the Waterford Crystal button that signals the Ball Drop. This year, due to onsite social distancing protocols, the Special Guests will not appear on stage. Instead, each Special Guest will watch the event from a private, physically distanced viewing area.

As to the stars who performed, no one seemed more appropriate than having global music legend Gloria Gaynor perform “I Will Survive,” her global anthem of encouragement, inspiration, and perseverance, along with “Joy Comes In The Morning” from her 2020 Grammy® Award winning roots gospel album, Testimony. She sang her hit song, “Never Can Say Goodbye” — another anthem perfect for this night.

Actor and TV personality Jonathan Bennett, star of the Hallmark Holiday film “The Christmas House,” and “Mean Girls,” — and host of the Food Network’s top-rated “Halloween Wars” and “Holiday Wars” — returned as the host of Times Square New Year’s Eve.

New Year’s Eve celebrations throughout the city and the world will no doubt be different this year, but one tradition will still be happening – the Waterford Crystal New Year’s Eve Ball drop in Times Square.

Part of Waterford’s yearly tradition includes replacing 192 of the 2,688 Waterford Crystal triangles on the Ball with a new design that embodies something for everyone to hope for in the New Year. This year, Waterford will be introducing a “Gift of Happiness” design to serve as an encouraging reminder to everyone to live each day in 2021 with joy and happiness.

But, he added, “What I am missing most is the in person interaction with team members, partners and reporters. The production and installation has all come together virtually which is unique to this year. Personally, not being physically present in New York this year is different, there’s no replacing the buzz and energy of New York especially on New Year’s Eve. But health and safety are our top priority, and I hope to be back again in the future.”

Safety of New Yorkers and participants is the priority of Times Square New Year’s Eve 2021. In addition to producing the event solely for television with no public audience allowing New Yorkers and the world to safely experience it from home, all New Year’s Eve broadcast activities will follow the State of New York’s Interim Guidance for Media Production during the CoVid-19 Public Health Emergency. Times Square New Year’s Eve 2021 has secured medical experts to consult on all health protocols and to ensure that every individual with access to the permitted areas follow the state established testing protocol, screenings, and safety guidelines.

All participants remained masked at all times except when preforming and will adhere to distancing regulations throughout the production site. Additionally, all Special Guest household groups, who are included in the capacity limits for the production, will be staged within an individual household sealed zones to proper distance from other guests, performers and crew.

Reflecting further Brennan concluded, “Even though we’ll all be celebrating differently this year, we feel that the new panel design “The Gift of Happiness” represents hope for a better 2021. I’ll be celebrating at home with my family and reflecting on living this year’s theme – happiness and generosity – throughout 2021.”