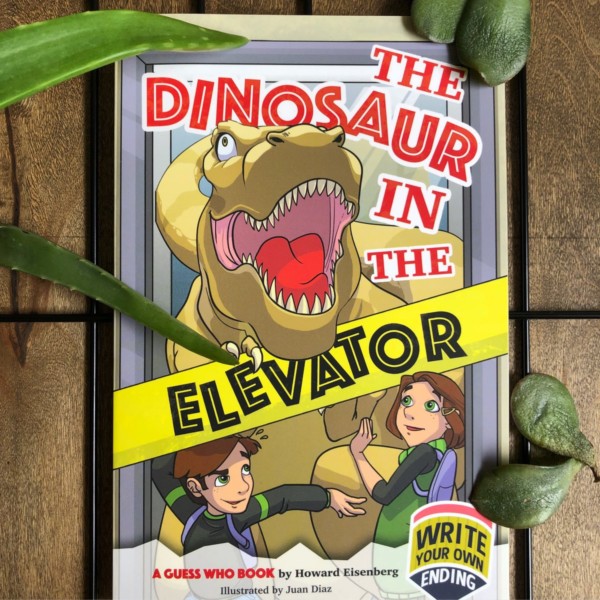 The Dinosaur In The Elevator is a suspenseful, witty, and fun “write your own ending” book for children ages 6-10. This book allows the reader to exercise their imaginations and writing skills in the first book of a new Write Your Own Ending series by veteran 93-year old author, poet, and dramatist, Howard Eisenberg.

Newly released from Mascot Books, they are offering 40% discount with the code dino40.

Twins Robbie and Abby get more than they bargained for when they imagine a museum T-Rex back to life. Soon they’re on an adventure through the Cretaceous Era with dinosaurs of every shape and size. Not all the dinosaurs they encounter are friendly, but they are surprisingly helpful. Can you guess their names from the clue-filled poems they sing?

I’m One Of The Smallest Dinosaurs, All The Big Guys Want To Snatch Me, But That Will Not Be Easy, ‘Cause First They’ve Gotta Catch Me – The Velociraptor

In this Write-Your-Own-Ending book, you get to be your own author.  Each book contains blank pages near the end, perfect to figure out how you’d get the main characters out of every desperate situation they’ve gotten into, or you can enjoy the ending provided. The authors ages 6-10 are invited to enter the contest! Author of the best ending will win $100, and two runners up will win a free autographed copy of the next book in the “Write Your Own Ending” series. Co-author endings can be e-mailed to sirhowardeisenberg@gmail.com.

The author, Howard Eisenberg, now 93, began is writing career at 18. It was in a US-occupied SS barracks at the end of WWII as editor of his unit’s mimeographed Company K Rifleman. Over the years, he has written six books, a musical and hundreds of major magazine articles, often with his late wife, Arlene, who later co-wrote What to Expect When You’re Expecting.  Inspired by the team’s Toddler Years book, he earned the title of “Toddler Poet Laureate” for writing 43 wry poems about toddlers in Adorable Scoundrels. Asked why he has turned to writing children’s books, he explains, “It keeps me young”.

Earlier children’s books by the author include the Guess Who series for pre-K and older children: Guess Who Zoo, Guess Who Farm, and Guess Who Neighborhood. They are “Fun that Educates” with clues in every line and the last word left blank for guessing. The Dinosaur In The Elevator, A Guess Who Zoo book that is reinventing children’s literature  and is available on Mascot Books, use discount code dino40 for 40% off!https://mascotbooks.com/mascot-marketplace/buy-books/childrens/early-chapter-books/without-excuses-big-gifts-for-little-gamecocks-2/ To see more about the author, please visit:  www.howardeisenbergauthor.comSocial media  Twitter, IG & Facebook @guesswhozoo