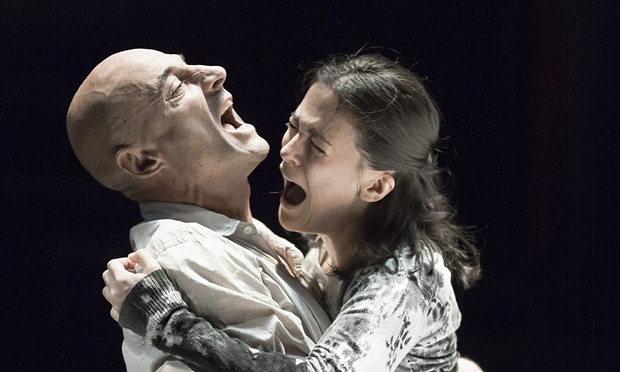 A View from the Bridge Obscured

A View from the Bridge Obscured 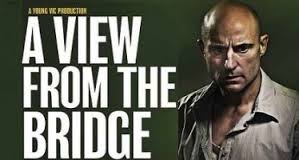 Forget about what you know about Arthur Miller’s A View from the Bridge, last seen on Broadway five years ago. This production, a transfer from the Young Vic, staged by director of the hour, Ivo van Hove is more esoteric and avant-garde than devastating. More Greek tragedy than a slice of Brooklyn lower class on a rollercoaster of doom. This is a re-conception of A View From the Bridge, yet there is no reference of this in the playbill. It obscures, the original by cutting out all props except for the chair and a pair of heels creating an air of minimalism. The actors walk around barefoot, in clothing that is not of the time frame and the Fauré Requiem plays as if we are in something holy that has gone array. The mostly British cast, speak in numerous accents, which in some cases come off as incredible and inaudible. Brooklyn is after all in New York, so where this might have come off plausible in the UK it is not the case here. 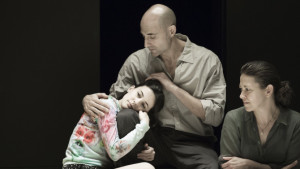 Miller’s 1956 drama was about jealously and incestuous love, but some how in this production it seems about other things. Mark Strong who is a marvelous Eddie Carbone, is a Brooklyn longshoreman whose lust for his 17-year-old niece Catherine (Phoebe Fox) leads to his demise when he rats out two illegal immigrant cousins. His reasoning is Catherine has fallen for one of them and wants to marry him. In the original the town turns on Eddie as one of the men stabs him to death. Here some of that is blurred.

In the original script Eddie is described as “husky, slightly overweight” longshoreman. Mark Strong is sexy and animalistic with a strong sexual chemistry. Miller does not start off his play in a steam bath stripping down to underwear.  Catherine doesn’t jump into his arms looking like she wants him as much as he wants her. She waves out the window and her outfit doesn’t look like it came from a thrift store. She also falls for the blonde Rodopho (Russell Tovey) almost instantaneously and the two begin dating. In this version we never really see their romance beginning. During the confrontation Eddie is without a knife, so we do not know in the end he brought this on in more ways than one.

The play is still narrated by Alfieri (Michael Gould), a lawyer who knew what was coming but cannot, stop the ending. In this production, he is more like the stage manager in Our Town. The set by Jan ­Versweyveld is like a bleak fish bowl boxing ring. We are made to be observers.

What makes this production so watchable is the primal force of Mark Strong. His Eddie is not the typical one. Here is a man who wants to be more than his class, so he fights for it for his niece. When she is content with her lot, his dismay reveals his inner longings that would have stayed quite if not provoked. In this production would he have those feelings if his wife tried more for his affections? If his niece didn’t throw herself at him in a way that seems so inappropriate and where clothes that show more that they should? When he kisses her and then Rodopho, that kiss seems more like punishment for him and possibly a tinge of his own sexuality on the line. Because he is not drunk and the kiss more passionate on the side of Rodopho, what are we really suppose to be seeing? Phoebe Fox just seems miscast as Catherine. She is not alluring at all and her accents and vocals are almost impossible to understand. Her Catherine is a belligerent child who wants what she wants. Nicola Walker, as Eddie’s wife, Beatrice’s becomes the voice of reason and we wonder why it has taken her so long to understand this problem. Ms Walker is tender and sympathetic. As Marco, Michael Zegen, the brother who strikes out until he speaks has a strong presence until his small monologue when he becomes squeaky and loses his power. Russell Tovey is a perfect Rodolpho and Michael Gould’s Alfieri lead us well through this madness.

Be warned Van Hove’s production drops the intermission and runs about two hours and if you leave you do not return.

The sound design by Tom Gibbons makes the actors at time impossible to understand. The costumes by An D’Huys are out of period and in a word ugly especially for Catherine. Was there no budget for shoes?

I am a purest when it comes to plays, especially when the playwright is dead and can not speak up. Van Hove’s direction is hit or miss and for me, this was a miss minus the compelling performance of Mark Strong.