A Visual, But Inconsistent Lear: That Old Man I Used To Know 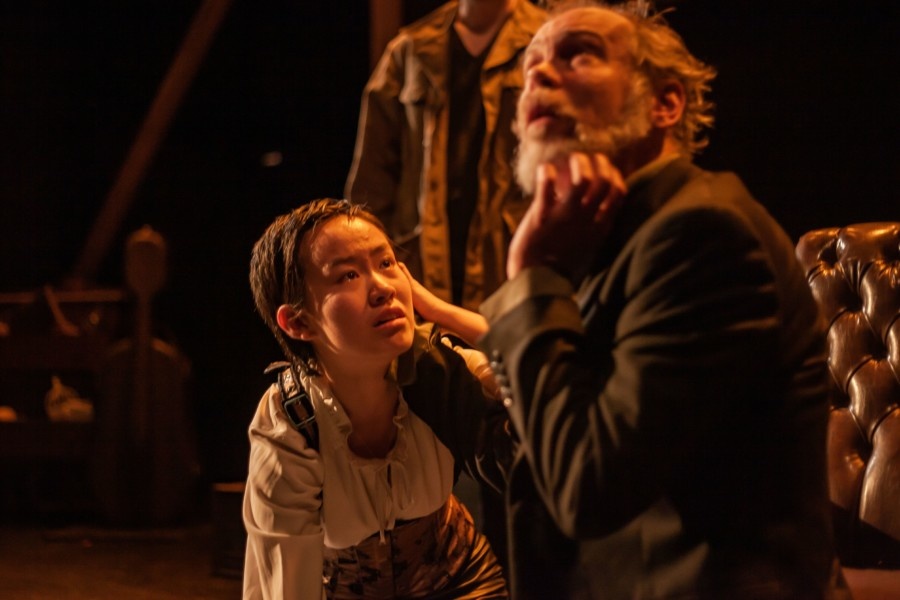 A Visual, But Inconsistent Lear: That Old Man I Used To Know

Lear: That Old Man I Used To Know, adapted and directed by Beth Ann Hopkins is a new play based on Shakespeare’s King Lear. After last years production on Broadway, it is a little too soon for this three hour epic. The Smith Street Stage, has brought this new version with musical direction and arrangements by Elliot Roth, which is visually stunning at times.

This classic story is retold through the eyes of a child, but I have to admit I never got that analogy, or the new essence of this show. The extra added funeral that happens in the attic is confusing, as is the rest of this conception. We start with a young girl (Aileen Wu) in an attic covered with a drop cloth and surrounded by books. As she begins to read a book, the characters of King Lear (a wonderful Louis Butelli) come to life and the girl becomes Lear’s youngest daughter Cordelia.

We follow the story of an elderly King approaching dementia, who has decided to divide his kingdom between his three daughters. Lear’s eldest daughter Regan (Ashley Scott) and her sister Gonerill, (Hannah Sloat) fawn with false adoration, but Cordelia refuses. Being the King’s favorite he is hurt and banishes her. Lear’s loyal advisor Kent (Pete McElligott) sides with Cordelia and is also banished. In the meantime Gloucester (Sarah Dacey Charles) the kings best friend, is dealing with the Cain and Able story. His son Edgar (Jonathan Hopkins), the good son is betrayed by the bastard Edmund (Alex Purcell) as greed, manipulation and chaos issue. In the end death and heartache are the winners.

The biggest problem with this production is the inconsistent in the performers acting choices. You have a fabulous Louis Butelli as Lear, with Mr. McElligott and Mr. Purcell, also well versed in Shakespeare. You have a non equity Ms. Wu, telling the story and playing Cordelia, whose idea of acting is screaming and when she mimes, she is consistently off by a beat. Kieron Anthony as Albany (Kieron Anthony) also does well. This company did some gender bending in the roles with Sarah Dacey Charles as Gloucester and Vanessa Butler as Cornwall. The most inconsistent of the acting choices was Mr. Hopkins, whose acting was weak in scene 1, wonderful in the Jabberwocky speech and then lasped into a Southern drawl when helping his father. Isn’t the Jabberwocky by Lewis Carroll and how did a Brit learn a Southern accent? Maybe this is a dramaturgy problem. I also liked Noelle Franco’s performance as the fool. Rounding out the cast was Christa Kimlicko Jones.

Beth Ann Hopkins visuals are outstanding as a suitcase doubles as stocks and an old sheet becomes a map. As the adapter of the play as well, not everything works.

Steve Brenman’s set is so inventive and clever, as is the costume design’s by Sherry Martinez. I especially like the jacket covered in book covers that Lear wears and the pieces of set that allow the actors to disappear. The sound design by Darin Hallinan is well done, but way too loud and the lighting by Charlotte McPherson works well. Doubling as the fight choreography and assistant direction Alex Purcell is a standout.

King Lear is one of my favorite plays in the Shakespeare cannon and I felt I knew him less, not more with this production.