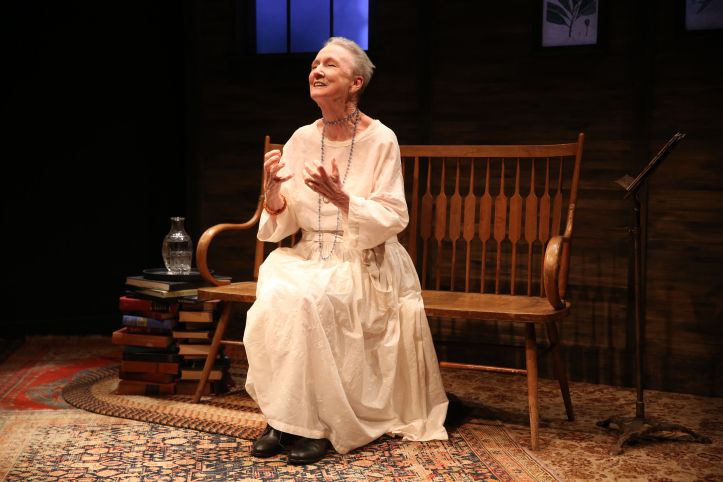 Let’s be honest. I would go see Kathleen Chalfant (Tony Award nominated for Best Actress (Featured Role – Play) in Tony Kushner’s Angels in America and a Outer Circle Critics, Drama Desk, Obie and Lucille Lortel award winner for her performance as Vivian Bearing in Margaret Edson’s Pulitzer Prize-winning Off-Broadway play Wit) do just about anything on stage.  Read a telephone book, recite an instruction manual, or even read poetry (I’m not the biggest fan, I most readily admit). So I didn’t really do much research beyond reading the words: “starring Award winning Kathleen Chalfant” for me to sign up to see A Woman of the World, a strongly orchestrated presentation by The Acting Company, in association with Miranda Theatre Company, currently playing in the small intimate Theater Cat 59E59 Theaters. Only when firmly seated, I discovered that this one-act one-woman show was about one of America’s most celebrated poets, Emily Dickinson and how her poetry became as well read and acknowledged as it is today. So I thought, “huh, how funny.” I literally did say those things about the phone book and poetry just before the show began, and now, in those first few moments when the structural setup was being presented, I imagined I was being tested, somehow by the theatrical gods. Did I really mean what I said concerning my affection for this great and warm-voiced actress I so admire. Or was a just telling old wives tales that wouldn’t hold up against the cool Maine wind?

It turns out, that even with the discourse deliver set-up as explained by Chalfant’s engaging true-to-life character, Mabel Loomis Todd, a fascinating woman, best known as Emily Dickinson’s posthumous editor, this was not going to be, nor did it ever turn into anything close to a dry or dull poetry reading. It blossomed, courtesy of the Hog Island wind, into something quite different, a truth-telling conversation with A Woman of the World, unabashed and unashamed to spill the secrets of her life and her association with the recluse poet, that as it turns out, I knew nothing about.

That self-referred-to title, is one that her late 1800’s community placed on her as something of an stinging insult, positioned to inflict hurt and shame. But Chalfant’s Todd wears that jab on the progressive’s shoulders with pride and defiant grace. She’s radiate in her dishonesty and corrective embrace, giving us an entry into the life a woman born before her time. She’s famous, for being editor but also for finding ways to embarrass her uncomfortable daughter watching on from behind us, hiding behind her shame and the hard covered books that have embraced them all on those clear Maine nights. Todd’s story delivers on numerous levels, never fully invigorating the subject matter whole heartedly, but never losing our interest in her extraordinary life.

Evidence suggests that Dickinson lived much of her life in isolation. Considered an eccentric by locals, she developed a penchant for white clothing and was known for her reluctance to greet guests or, later in life, to even leave her bedroom. Dickinson never married, and most friendships between her and others depended entirely upon correspondence.

While Dickinson was a prolific poet, fewer than a dozen of her nearly 1,800 poems were published during her lifetime.The poems published then were usually edited significantly to fit conventional poetic rules. Her poems were unique to her era. They contain short lines, typically lack titles, and often use slant rhyme as well as unconventional capitalization and punctuation. Many of her poems deal with themes of death and immortality, two recurring topics in letters to her friends.

Although Dickinson’s acquaintances were likely aware of her writing, it was not until after her death in 1886—when Lavinia, Dickinson’s younger sister, discovered her cache of poems—that the breadth of her work became public. Her first collection of poetry was published in 1890 by personal acquaintances Thomas Wentworth Higginson and Mabel Loomis Todd, though both heavily edited the content. A 1998 New York Times article revealed that of the many edits made to Dickinson’s work, the name “Susan” was often deliberately removed. At least eleven of Dickinson’s poems were dedicated to sister-in-law Susan Huntington Gilbert Dickinson, though all the dedications were obliterated, presumably by Todd.

In Pulitzer Prize finalist Rebecca Gilman’s (The Glory of Living) world premiere play, as directed with a graceful air by Valentina Fratti (Cherry Lane’s Catch the Butcher), the story swings wide from the expected first impression that this was going to be about the Dickinsons. It’s really an exploration of this brave woman who was taking strides across a time period as is she lived in another dimension entirely, making up new rules of engagement as she marched to the beat of a very different provocative drummer. On a sweet but overly fussy set by Cate McCrae (59E59’s Bitter Greens) with gentle lighting by Betsy Adams (MCC’s The Wrong Man), simple costumes by Candice Donnelly (Broadway’s Hughie), and solid sound design by Margaret Montagna (New Ohio’s Raw Pasta), I learned history, not just about Emily Dickinson, but of the world that pulsated around the recluse. It’s a fascinating journey, past terrible gossips into the warm recess of the Point Breeze Inn. Lead by a brilliantly warm storyteller, easily distracted by the wind or the waves, the informal entertainment is as delightful and unique as finding a four leaf clover in the moss. From Wikipedia:

Todd doesn’t suffer fools gladly, nor does she give us an unbiased account of how she became known as the woman who edited (perhaps a bit too much, especially regarding the often deleted wife of Emily’s brother and Todd’s lover) the first volume of Emily Dickinson’s world famous poems. Through the warm passionate style of the very responsive and effervescent Chalfant, A Woman of the World intrigues, enlightens, and engages, breathing life into a lecture about a poet that I now know far more about then when I first walked in and took my seat.