A Word to the Wise Don’t Miss Hadestown

A Word to the Wise Don’t Miss Hadestown 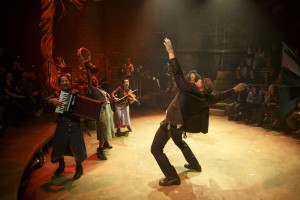 Anaïs Mitchell’s Hadestown is a cross between The Robber Bridegroom, a Lower East Side folk session and a Southern female take on the tale of Orpheus and Eurydice. The New York Theatre Workshop has done it again, this time with the wonderful Rachel Chavkin, at the helm. Chavkin helped create Natasha, Pierre & the Great Comet of 1812 and The Royale. This is a director to watch, as she breaks new ground and creates a new brand of musical story theatre. 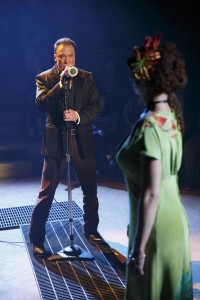 For our trip into a New Orleans Greek Tragedy The Fates (Lulu Fall, Jessie Shelton and Shaina Taub) lure us in perfect harmony “With Any Way The Wind Blows,” into a dreamy mythical world. Once there, Hermes (Chris Sullivan) tells us of “The Road to Hell.” He is our bluesy narrator, who is like a blues traveler. We meet our young lovers; the tunesmith Orpheus (Damon Daunno) and the wanting Eurydice (Nabiyah Be). Since it is spring into summer, Persephone (Amber Gray) is allowed to gift the earth with her plentiful and generous spirit, but once fall arrives, it is back home to her husband Hades (Patrick Page) and his underground dark lair. Neither woman is happy with her predicament. Eurydice sick of struggling with her broke musician of a husband steals off to become Hades lover and instead is sucked into a capitalism, which uses but does not give back. When Orpheus, love sick with the missing of Eurydice sneaks into Hades, to win his lover back she is willing but he must win her back. In a “Devil Went Down To Georgia” moment he succeeds in doing so. As the tale is told Orpheus wins but “Doubt Comes In” and the moment keeps on repeating itself in time, like a loop that will not quit. Here hope is a lost cause but rings ethernal. 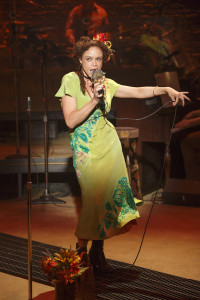 Patrick Page entices with his gravelly voice and gives Hades depth with his love of Persephone. He is an oily snake, who can hold you in his grasp as he seduces you. Amber Gray is delightful as she sizzles, blazing her talent into the night. Chris Sullivan is a wonderful narrator and it is like he is leading us in a New Orleans funeral complete with panache and style. Lulu Fall, Jessie Shelton and Shaina Taub as The Fates are amazing musicians as well as songbirds. Nabiyah Be is incandescent as Eurydice. We believe her journey and her disappointment at life but hoping to get it right someday. This girl is somebody to watch. 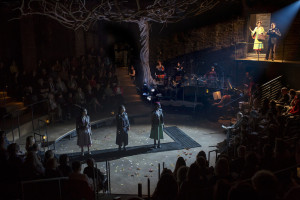 The Cast of Hadestown

Who I did not think captured his character was Damon Daunno as Orpheus. We never understand why Eurydice falls for him in the first place. He is supposed to be an amazing tunesmith who can woo with his songs and lyrics, but none of his songs relay that fact. In the song to win all, he just doesn’t cut it. Part of the reason may be that most of his songs sound as if for a woman’s voice. They are too high and strident and there isn’t an 11 o’clock number that wow’s for this singer of songs. 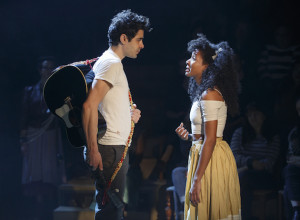 The six-person band, under the music direction of Liam Robinson, is like another character especially admired the playing of Michael Chorney on guitar which he makes sound like a lyre.

The choreographed by David Neumann, is interesting but when the big dance moment comes for Hades and Persephone he falls flat.

Chavkin and Mitchell are both extremely talented and this piece is definitely something to see, but it needs some more work before it moves forward, which I would be surprised not to see it on the boards next season either off or on Broadway.